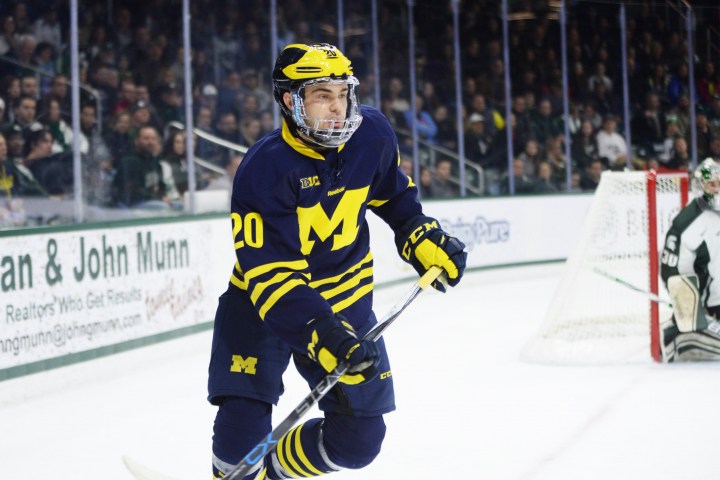 The NHL trade deadline has come and gone, but GM Peter Chiarelli is still making moves for the Edmonton Oilers. On Wednesday, the club announced that they were acquiring forward Cooper Marody from the Philadelphia Flyers in exchange for a 2019 3rd round pick.

That pick previously belonged to New Jersey, and was acquired in exchange for Patrick Maroon back on deadline day.

Marody was drafted in the sixth round, 158th overall, by the Flyers during the 2015 NHL entry draft. He has outproduced that draft position to this point, and has emerged as one of the best forwards in the Big Ten conference of the NCAA through his junior season.

The 6’1”, 173 pound center is a right shot, and very well could turn pro when his college season ends. Michigan is currently in the NCAA Tournament and will play Northeastern in the opening round this coming Saturday.

Marody’s junior season was a breakout campaign, and it firmly has him in the range of an NHL prospect now. He also fits in perfectly with Edmonton’s organizational needs, and could jump right to the AHL in a top-nine role next season.

Marody is a two-way forward who may have enough skill to play a middle six role at the NHL level. He’s not going to be a game breaker, but I can see him being a valuable piece to a club’s roster. I’m of the belief that Marody will be an NHL’er.

Here’s a quick look at Dobber Prospect’s profile on Marody, with the latest observation coming from December.

Cooper Marody has taken off on the scoresheet much like a bat out of hell and it shows as the collegiate junior has 24 points through just 16 contests so far this season. When you thought he could not get much faster than he already was, he somehow manages to find a high gear and is making good use of it when generating creating for others in the offensive zone. With him and other prospects coming down the pipeline, current NHL fixtures such as Giroux and Voracek will have a very capable cavalry for backup support in due course. Continuing to put on good weight while keeping his quickness intact remains a high priority

It’s a low risk move for Chiarelli and his scouting staff, but it does give the Oilers a pro ready prospect to help stock the cupboard down in Bakersfield. Marody very well could join undrafted free agent Cameron Hebig, former second-round pick Tyler Benson and Kailer Yamamoto in California next fall.