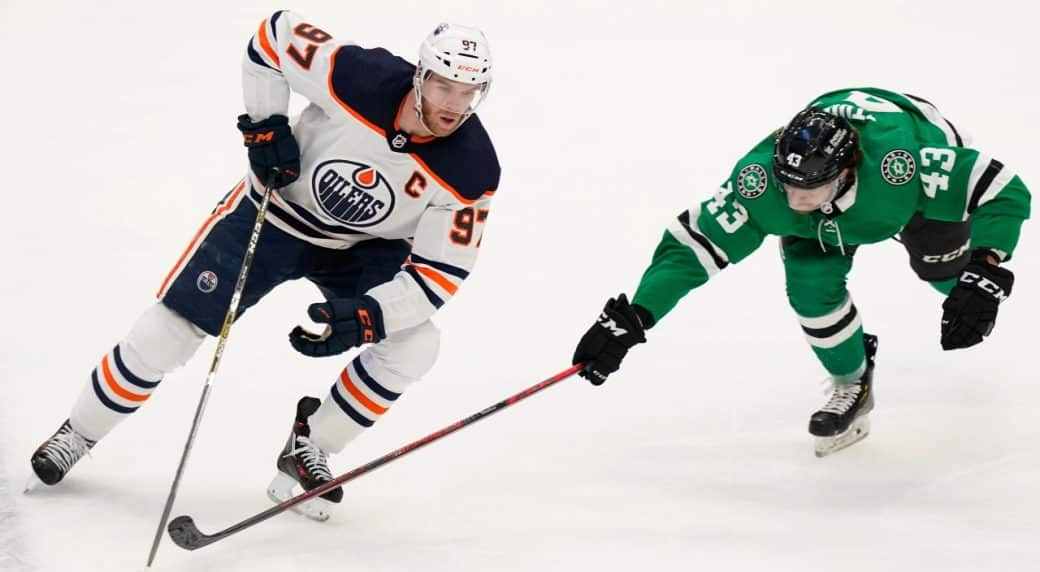 Outside of a poor showing against the Wild and a shootout loss to the Avalanche, it’s been nothing but blue skies for the Oilers since a late March 9-5 loss against the Flames ten games ago. The defensive effort has produced outstanding results during the 8-1-1 stretch, down to a meagre 1.9 goals against, punctuated by back to back shutouts by Mike Smith.

The goalie’s recent play has been about as positive as could be expected from the veteran, including a legendary OT assist against the Sharks. As frustrating as seeing the worst case scenario for Smith was during the first 5 months of the season, peaking as the postseason draws nearer has provided an equal and opposite representation of his abilities.

It’s not as if his perfect streak can go forever, but it’s not as if Koskinen’s play has dropped off either. Any way you slice it the goaltending has come into form, giving the team a chance to win every night.

It’s a feat that, much to our pleasure, the Oilers have been able to pull off the majority of the time. Between the coaching change and an improved roster, the Oilers are almost cruising to a playoff spot, which seemed unlikely a few months ago during the dog days of the winter losing streak. We’ve come a long way since feeling pissy, no doubt.

Opposite tonight, the Stars are far deeper into desperation mode. Despite going 5-4-1 in their past 10 they find themselves in a playoff spot, tied with the Predators in the wildcard spots, ahead of the 9th place Golden Knights and the 3rd seed in the Pacific division Kings. Although the Stars are far from a perfect team they believe themselves to be well suited for the postseason, and it’s hard to argue against past results.

Although they missed the playoffs last season the year prior they lost in the Cup Final. On top of that the hallmark of the Stars lineup is strong defensive play which is historically well suited to the lawlessness of the playoffs. The Oilers should be confronting a hungry opponent with a lot on the line.

As long as Smith stays perfect he should be getting the start, as we expect him to tonight. The young Jake Oettinger seems to have all cemented his hold of the starters job for the Stars, but a poor showing against the Canucks in his last game has us expecting to see Wedgewood to get the start tonight.

For the third straight game we’ll see coach Woodcroft go with 7 defencemen and 11 forwards, a configuration we saw earlier in his tenure. It’s worked quite well, and given the circumstances it’s quite logical. The defence has really come together since the addition of Kulak, or perhaps the union of the Nurse-Ceci pairing.

That being said Russell has a lot to offer, and much of what he does offer is a welcome addition to the blueline more offensively minded slant. Not only that but the extra body helps support the rest of the blueline minutes, as after Nurse, and to an extent Ceci, the Oilers defenders are better served playing under 20 minutes a night. Russell’s effect is greater than a fourth line forward’s could be for the group.

Not to mention McLeod and Kassian are more than enough to make a worthwhile double shift out of McDavid or Draisaitl. The forward group has been the driving force of the Oilers strong run of late, and at the very least the top 9 checks all the boxes one would expect from a contender.

As most are aware by now, Robertson-Hintz-Pavelski is one of the league’s top lines. It’s a testament to them as players but also to their synergy that they are doing this without any of the 3 featuring in any top 50 players type of lists. At one point Pavelski was regarded that highly, and it’s true he’s not quite the force he was a decade ago, but the veteran has maintained a high level of play. He can still shoot well, but relies on smart, crafty plays to get the puck to his teammates and is still one of the best shot deflectors, especially from higher in the slot.

Hintz has great skating skills and leverages them into a large number of offensive zone entries. It’s a skill that’s lacking a bit on the Stars roster making his play even more valued by his team. Often he’ll get the puck in full stride, flying across the opponents blueline before kicking it back to his linemates joining the rush. Finally, Robertson will soon be considered the Stars best forward if he isn’t already. He’s got several elite skills including a shot that he can score from distance with, allowing him to find soft areas in the high slot if he so chooses. On top of that Robertson has significant size and strength that he uses to win battles all around the ice, from the forecheck to the net front.

The middle six leaves a bit to be desired from a true contender. Seguin and Benn are unlikely to perform to their cap hits at this point, but are still useful players. Unfortunately, they aren’t exactly being elevated or buoyed by their linemates. Radulov still has moments where he looks effective, but hasn’t been able to convert that into any production for some reason, I wouldn’t rule out a few playoff goals. Gurianov has been inconsistent enough to be moved in and out of the lineup, but needs to be an important factor for the Stars to have a chance, and I think he has it in him to do so.

Peterson and Studenic are younger players getting a big opportunity in these roles. There’s been some promise for both, Peterson up through the Stars system, Studenic bouncing around waivers. The best way for the Stars to improve going forward is to add more offensive talent to their top 9, and these two have an early shot at stepping into said roles.

The 4th line of Raffl, Faksa, and Glendening is as dedicated a defensively minded trio as possible. They handle a lot of defensive assignments, to the point where they are used more often than the moniker of “4th line” would suggest. Only Benn, Seguin, and the top line of Robertson-Hintz-Pavelski average more icetime among Stars forwards.

The Stars top 4 on the blueline is the strength of their team, led by the outstanding Miro Heiskanen. Although he may not generate as much offence as other younger defencemen such as Makar, Hughes, or Adam Fox he is certainly in that stratosphere of player overall. Excellent skater, great passing and puck handling, and the sense to play top minutes in all situations, there’s a lot to like about his game. Suter is a good partner as someone who continues to play top minutes, quietly stabilizing things all the while.

Lindell and Klingberg are staples at this point, and a nice compliment to each other stylistically. There’s been a lot of talk that Klingberg has declined under coach Bowness, either through style of play or age, and the two sides have expressed a willingness to move on from each other this offseason. For now, this pair is slotted in a strong position behind Suter-Heiskanen.

The Stars have had defenders in and out of the lineup through the season, but with the top 2 pairs playing so many minutes the 3rd pair does not need to be overtaxed. Hanley and Hakanpaa are well suited to succeed in their roles.

Wedgewood has bounced around on waivers over the years, but is coming up big and earning the trust of the Stars organization. He’s 3-0-2 with the team, delivering huge standings points as the Stars scratch and claw their way to a playoff berth. Without Holtby or Khudobin, not to mention Bishop, there was a huge need behind young starter Oettinger at this most crucial juncture. He’s done as well as one could have dreamed for a late season waiver.

Sure, he struggled in New Jersey with the Devils (who hasn’t of late) but it was surprising that Arizona waived him this season as well after he performed in 26 games for them with strong results. Finally behind a strong defensive team it seems he’s had the chance to shine.