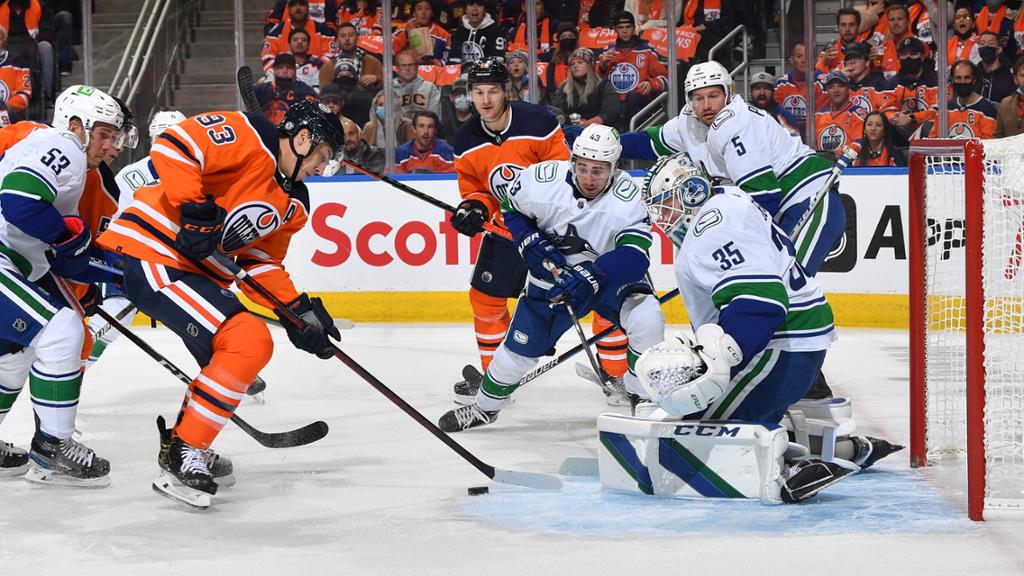 Well folks, this is it. The final stop on the regular season schedule comes on the second night of a back to back, and with home ice and a first round opponent decided, all that’s left to decide on is who gets the night off. Tonight’s game is merely a formality, for both these teams’ fates have been sealed, but nonetheless offers a chance to reflect on our journey to this point.

One thing these teams shared this season was a substantial difference in play after a mid season coaching change. There were no doubt some desperate moments that led to their former coaches being let go, but both rosters responded nicely and showed that they were capable of more. Where they differ is that the Oilers will have a chance to continue to prove themselves while the Canucks will have to wait until next season.

In all it’s been an impressive and resilient campaign from the Oilers, who faced their share of adversities and rose to each challenge. It is hard not to think back on Brendan Perlini’s optimism in a mid season interview, stating that a long losing streak could lead to a long winning streak and a stronger self belief, and although not on the roster currently his outlook prevails.

Due to the nature of the game, its stakes, and the schedule itself it’s likely we see changes throughout the lineup leading up to puck drop. Woodcroft was coy on making any announcements on who might not be able to go and why, as the extra layer of secrecy that comes with the playoffs in terms of injury updates is in full swing.

For now we’re expecting to see Silovs in net for the Canucks in his NHL debut, while Koskinen looks to start again for the Oilers.

It seems as though the Oilers will be sitting out McDavid and Draisaitl, along with the injured Nurse that will make all 3 of the top Oilers unavailable tonight. All are expected back in the lineup early next week come the start of the playoffs.

The makeshift lineup tonight will include a familiar configuration of 11 forwards and 7 defenders.

RNH takes McDavid’s spot on the top line between the big, powerful set of Kane and Puljujarvi. RNH has been an exemplary teammate, taking a smaller role for the good of the team, so it is nice to see him get even this small look in a leading role.

In Draisaitl’s spot Ryan McLeod gets a great opportunity to test his mettle at centre. Like RNH he’s likely been relegated to a smaller role than he could have, but he’s succeeded in all the spots he’s been asked to fill this season. It’s only for one, relatively insignificant game, but it is worthwhile to see him in a top 6 centre role.

Derek Ryan kicks over to 3rd line centre and looks to continue his strong chemistry with fellow former Cane Warren Foegele. Kassian has had an inconsistent season but his size and disposition could see him become an impactful presence at any moment of a playoff series.

Brassard and Shore are both versatile enough to play any forward position, so it could be anyone taking a double shift with the fourth line tonight.

The big story on the back end remains Kulak, as the deadline acquisition continues to surpass every test thrown his way. He has the size and strong skating to be as impactful as his decision making allows, so as long as he keeps making smart plays there’s really not much he can’t do.

In a similar archetype, Broberg has continued to show signs in the early stages of his career. Although at this point he’s not a regular in the Oilers lineup this has been a successful season for the Oilers top prospect, posting nice offensive numbers in the AHL and showing he can already handle a depth role in the lineup. He will be pushing for a regular spot next season, an encouraging timeline given the cap crunch ahead, but ultimately his long term upside has been and should continue to be the priority.

After a deeper Canucks team showed well in the 2020 playoff bubble it has been a bumpy road for the franchise. Ultimately the GM Benning and coach Green were moved on from. Although the front office received a much needed overhaul most of the changes have been by means of deployment under coach Boudreau.

Perhaps rightly so, despite some of the names missing from the lineup tonight the Canucks have several strong players on their roster. Despite some design flaws I believe that the poor showing we saw in 2021 is a lot more surprising than the solid effort we’ve seen in 2022.

J.T. Miller has been the Canucks best forward this season, and has continued to improve into his late 20s, reaching an incredible 98 points on the season, 30 more than his next closest teammate. Hitting 100 points tonight is certainly a possibility, something that would’ve seemed unlikely to Canucks fans at the start of this season, let alone Rangers or Lightning fans in the past.

Miller brings a well rounded game to the table and is able to contribute in a multitude of facets to the game, including a fiery work ethic. Similar to an extent, in that sense, is linemate Garland, who has been riding on Miller’s wing for the last half of the season or so. Chiasson is a circumstantial fit for now, although overextended so high in the lineup.

Scoring can be streaky, but we really shouldn’t worry too much about Elias Pettersson. Things did look concerning early under coach Green, but Pettersson is a very talented player who should be producing for the Canucks for the better part of the next decade. Boeser is likely in a similar category, and this is likely as down a year for the sniper as we might see for a while. Podkolzin is growing nicely into a role here in the top 6, adding a more straightforward power-style of gameplay to his skilled linemates.

The bottom 6 isn’t completely devoid of talent but it does leave a bit to be desired tonight. Lammikko has jumped into a regular spot this season, and should join Dickinson and Highmore in depth roles for the Canucks next season. Richardson is a journeyman veteran at this point who can be relied upon for faceoffs, while this might be the last best chance Petan has to make an impression.

The top pair of OEL and Myers definitely took a lot of heat this offseason for being overpaid, if not a detriment to their team’s overall play. Perhaps it’s thanks to Boudreau but the veteran pair has been serviceable in big minutes, essentially surpassing the expectations of the general public with that alone. With a lot of money and term tied up in these 2, getting some positive play out of them is hugely important to the Canucks whether they stay on the team or are moved on from. From a cap perspective their play is certainly one of the most important developments under Boudreau.

Speaking of surpassing expectations, Schenn has become an integral piece of this Canucks team thanks to his steady defensive play complimenting that of Quinn Hughes so well. Hughes is a star.

One of the few changes made to the roster by the new management was the low cost addition of Travis Dermott. Dermott has shown some decent results for the Leafs over the past few seasons and can play either side. With a low cap hit, useful defensive play, positional flexibility, and perhaps more upside it was a smart addition to a blueline that needed, and might still need help.

His partner Hunt is an offensive dynamo for a journeyman veteran, driving home the offensive nature of this blueline’s left side.