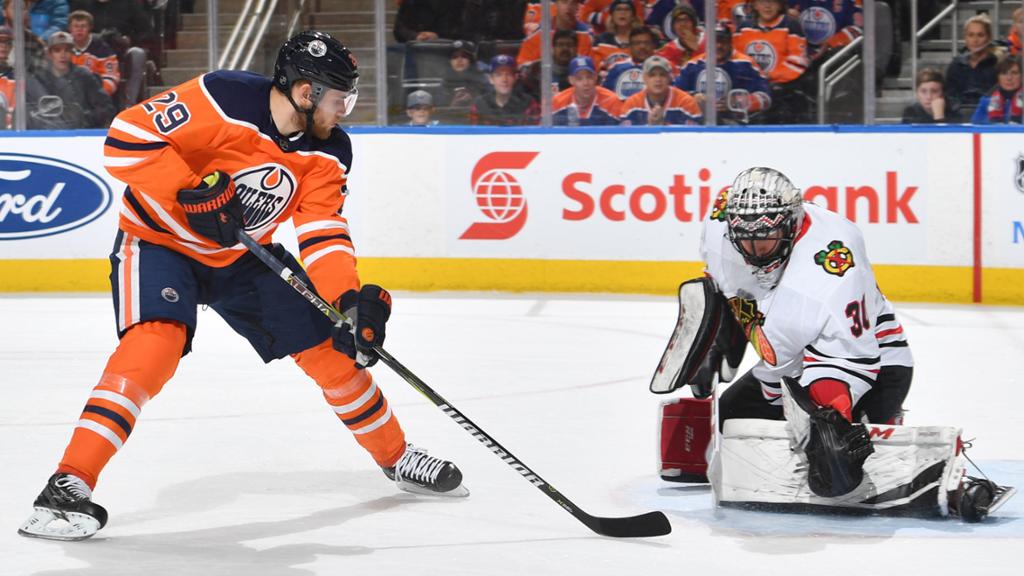 The Edmonton Oilers conclude their four game road trip tonight in Chicago when they take on the Blackhawks at the United Center. It’s the first of three meetings between the sides on the season, and the first of two in Chicago. The Oilers won their lone visit to Chicago a season ago.

The Oilers are 5-0-0 for the first time since 1985-86, and are two games off the best start in franchise history. The Oil also lead the entire NHL with ten points on the young season. The Blackhawks, meanwhile, are still searching for their first win of the season. They are 0-2-1.

Mike Smith gets the start for Edmonton, while Corey Crawford gets the nod for the Blackhawks.

Edmonton: Stay within the system. The Blackhawks defensive group isn’t exactly strong, and their forwards are not nearly as deep as they once were. The Hawks are a top-heavy team that can be exploited. Be patient and wait for chances to develop. They will against this edition of the Hawks.

Chicago: The Blackhawks best chance to win this hockey game is to create speed on the transition. If the Hawks can attack the Edmonton blueline with speed, they should be able to generate looks against a young, mistake prone Oilers defense.

Edmonton: Connor McDavid led the way for the Oilers a season ago with four points in three games against Chicago. Some of his best moments have come at the United Center, including an insane assist on a Patrick Maroon goal in 2017. What will McDavid’s next act in Chicago be? That alone will be worth watching tonight.

Chicago: Old friend Drake Caggiula has settled in nicely with the Blackhawks. He’s currently riding shotgun with Jonathan Toews and Alex DeBrincat on the top line. His combination of speed and skill makes him dangerous on the attack. Will the ex-Oiler curse once again be a factor?

Don’t expect too many changes from the Oilers after their best effort of the season on Saturday. Brandon Manning will once again sit on the blueline, while Gaetan Haas and Patrick Russell are expected to be the healthy scratches up front.

The Blackhawks changed up their lines following an 0-2-0 start to the season. It resulted in a 2-0 lead against the Winnipeg Jets, but ultimately the Hawks fell 3-2 in overtime. Jeremy Colliton has split up the Toews/Kane duo, while newcomers Zack Smith and Ryan Carpenter anchor the bottom-six.

The Oilers set an NHL record over the weekend when they beat the Rangers 4-1 at Madison Square Garden. They became the first team in NHL history to trail in and win five consecutive games. It’s not a trend they’ll want to continue, but it’s a good start to the season.

The Oilers also swept the New York metropolitan area for the first time in franchise history. The Oilers had won their first two games on the trip in 2017, but fell to the Rangers in a Saturday afternoon tilt in the final stop. This time, the Oil took care of business at the world’s most famous arena.