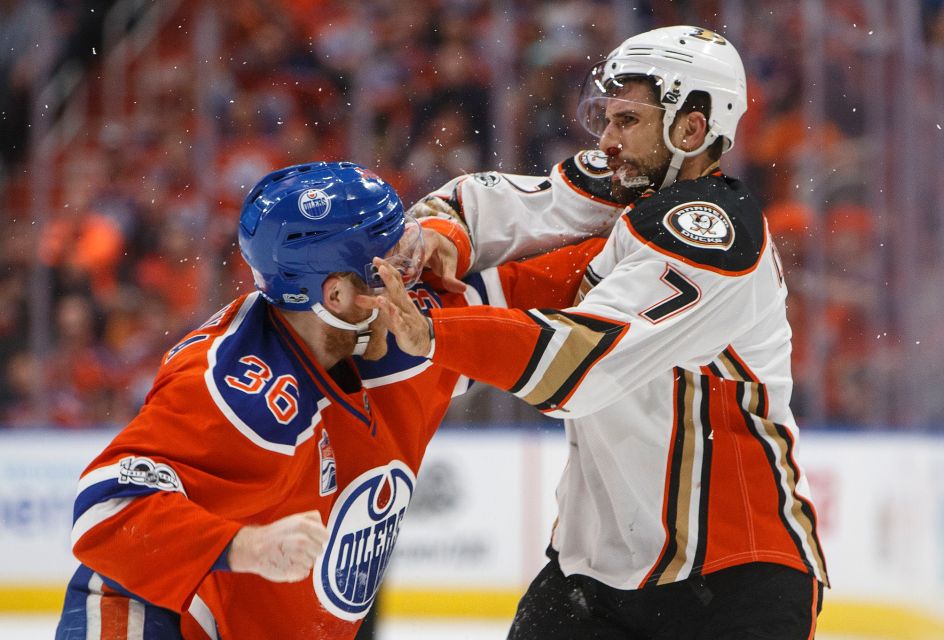 After last night’s thrilling 4-3 victory over the Los Angeles Kings that included the Oilers finally winning a challenge for goaltender interference, the club will look to make it three straight wins as they visit the Anaheim Ducks for the second time this season. It’s the third meeting of the year between the rivals, who split the first two meetings with the home side taking both.

Both the Oilers and Ducks played last night, with Anaheim dropping a 2-0 decision at the hands of the Arizona Coyotes down in the desert. They return tonight desperate for two points before tomorrow’s trade deadline. Speaking of the deadline, Edmonton acquired forward Pontus Aberg this morning from Nashville, sending veteran Mark Letestu the other way.

Al Montoya will get the start for Edmonton, while Ryan Miller is expected to get the nod for the Ducks.

Edmonton: An early start for Edmonton is key tonight. The club slept through the first period in the last meeting with the Ducks, and it ended up costing them the game. This is an Anaheim team with a habit of losing to teams worse than them, so if the Oilers can get one early and pressure Miller, they could be in a nice position to steal two points.

Anaheim: Test Montoya early and often. In his last two starts, Al Montoya has been pretty poor for Edmonton, surrendering four goals against Colorado in an overtime loss and five goals in a regulation loss to San Jose. He’s gotta be lacking confidence right now, and is coming off an injury. Test him early and often and try to sneak one through him. Do that, and the Ducks could have an easy night against a fragile team and netminder.

Edmonton: It appears to be one final lap for Patrick Maroon in an Edmonton jersey. The veteran forward is expected to be in the lineup tonight, but is also expected to be dealt prior to tomorrow’s deadline. In what likely is his final game as an Oiler, I suspect Maroon will put forth a good effort and leave Oiler fans with one last fun memory. It’s been a fun ride to watch Maroon in Edmonton, I truly mean that.

Anaheim: If the Ducks want to win this game, they’ll need Ryan Kesler to be his pesky self and shutdown Connor McDavid all game long. That makes Kesler, arguably the most important player on the Duck side, the player to watch tonight. What kind of tricks does he have up his sleeve for this one?

As mentioned above, the Oilers dealt Mark Letestu this morning in exchange for 24-year-old forward Pontus Aberg. Aberg has yet to join the team, and won’t be available for this one. Maroon is expected to play, while AHL call-up Ty Rattie is a game-time decision according to Jack Michaels of 630 CHED.

After playing yesterday, the Ducks are expected to make a few changes to their lineup. Derek Grant is likely to draw back in as the club’s fourth line center, while veteran defender Kevin Bieksa is expected to return to the lineup after a two game absence. John Gibson is still out with a lower-body injury.

This is the third of four meetings between the Oilers and Ducks this season, and the final meeting in Anaheim. The home team has won both of the first two contests, with Edmonton taking a 2-1 shootout decision in early January before a 3-2 Ducks victory on February 10th. The final meeting is set for March 25th at Rogers Place.

Here’s an interesting stat for you: The Oilers have scored just three goals against the Ducks this season. Two of those goals were scored by defender Kris Russell, who has one in each game this season against the Ducks. Anton Slepyshev scored the other, while Mike Cammalleri scored the shootout winner in the early January meeting.

The Oilers have a few players that could be moved prior to 3 p.m. eastern tomorrow, namely Maroon. That said, Mike Cammalleri could also be in play. The pending UFA forward has registered seven assists in his last ten games, but hasn’t scored a goal since December. AHL vet Eric Gryba could also be a trade target for teams.

It was a nice win for the Oilers last night, who have won three of their last four, but tonight provides a tougher challenge. This is a desperate Anaheim team that is better and deeper than the Oilers. This is a pretty tough matchup on the second half of a back-to-back set.

Ducks take this one 4-3 in overtime, with Kase getting the winner in extra time. Perry, Fowler and Henrique score the regulation tallies, while Slepyshev, Kassian and Caggiula score for the visitors.