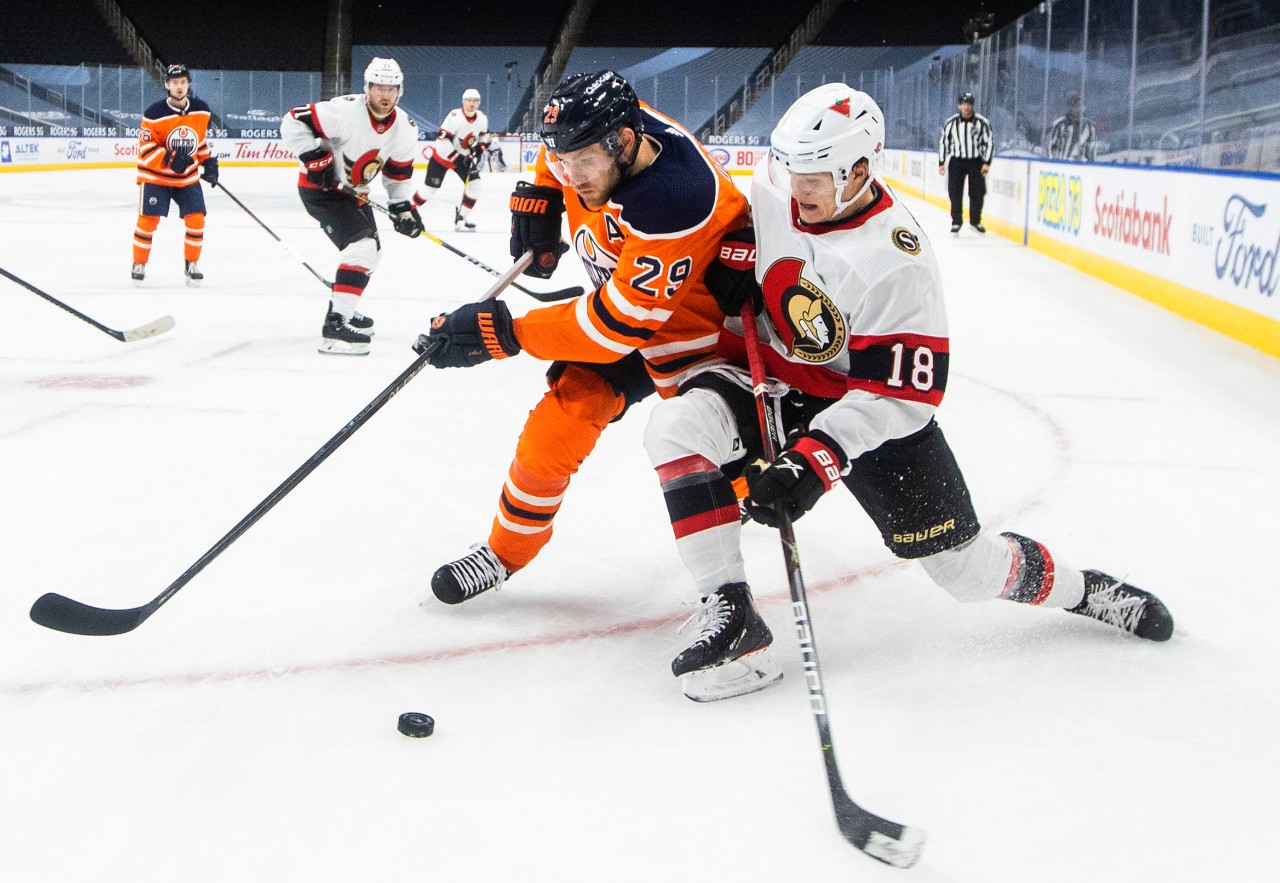 That’s right, you heard correctly, the Oilers are going to be playing a real life NHL game this Saturday when the Ottawa Senators are in town. Due to COVID and arena restrictions there has been scarce action over the past month, perhaps mercifully as the Oilers have dropped 12 of their last 14, 10 of which were in regulation.

The tough stretch has the Oilers in a middling position, eroding a strong start into a very real crisis of confidence across all aspects of the team. It’s been difficult for the Oilers to navigate putting together a lineup all season as COVID has depleted parts of the lineup consistently, and the recent lack of games has made it impossible for the Oilers to start playing their way out of the negative results.

The long time off might be a disadvantage, but at least for tonight that won’t matter, as the Senators have, like all the Canadian teams, played far less than usual over the past month or so. The Oilers are well positioned to get back into the win column against a team that McDavid and Draisaitl dominated many times last season.

It seems to be that Stuart Skinner will start for the Oilers, while the Sens counter with Matt Murray, who is coming off his first win of the season.

It might be a bit soon to hand the lead role to Skinner, but starting him in about half the time when he is up in the NHL is a good idea for the Oilers, affording either Koskinen or Smith a more reasonable workload during that time.

Edmonton: Despite the uncertainty of being able to dress a full lineup, the Oilers will have a good portion of their regulars available tonight. Heading into the season a lot of the talk around the Oilers was about splitting up McDavid and Draisaitl to improve the forward depth, but at this point if the duo can buoy a depth forward like Kassian it might be the best option. At the very least it’s worth a try, and if Kassian (or perhaps later Foegele) can keep up it would be a very positive development.

The second line might be a bit much, but it’s clear that McLeod has earned a regular top 9 spot on this team. With the likes of McDavid, Draisaitl, and Nugent-Hopkins ahead of him, it’s hard to say that centre is an area the Oilers need to target in a trade.

The defence pairs are a welcome twist on what we’ve been used to, and provide some intriguing possibilities. Although Ceci on the top pair might seem a bit much, the truth is he and Nurse form a pair that has all the tools to be depended on in all situations. Keith and Barrie are both well past their prime, but still offer some offensive capabilities. Perhaps their pairing suggests a more situational deployment which could shelter them and improve their results.

Bouchard and Lagesson have been 2 of the Oilers better defencemen this season, although without the prestige or reputation of the rest of the veterans in the lineup tonight. If all goes well this pairing will push past Keith-Barrie in icetime. I try not to editorialize the actual lineups too much but personally I’d list them as the 2nd pit outright.

Ottawa: The Senators top line is a good line, as all 3 young players bring a lot to the table. Tkachuk is quite like his father, a whirling dervish in front of the net, using his size, toughness, and skills to generate lots of shots in the highest danger area. Norris has a good shot from distance, the sniper of the group. Batherson might be the smartest of the group, leveraging his speed and hands to be effective all over the ice.

The rest of this lineup is not as skilled, but certainly has a lot of size and snarl. Formenton has obvious speed, and his usual linemates Brown and Paul have enough talents to be quality 3rd liners. Brown is out with a broken jaw, but Tim Stutzle is back from protocols today. The young German has lots of speed and skill and is still scratching the surface of his potential.

It will be interesting to see Bernard-Docker, especially in such a critical role. The former 1st round pick is part of a young group of defence prospects that should be bubbling into the Sens lineup for the next 2 seasons or so. Zub has been quite good during his time in the NHL and could be a factor on a Russia best-on-best roster. Brannstrom seems to have had trouble gaining traction in Ottawa, and could be an interesting piece in trade rumours going forward.

It’s been a busy week off the ice for the Oilers, as rumours of an Evander Kane signing were rampant, enough that GM Holland and McDavid were asked about the potentiality.

Kane of course has a long history of questionable off ice behaviour, ranging in severity, across many years. The most troubling are the incidents involving violence towards women. The gambling addiction and debt, the famous locker room incident in Winnipeg, the rumours (for all I know) about his teammates disliking him in San Jose, most recently COVID related infractions, and big ones at that, surrounding a fake vaccine passport (which he was suspended 21 games for) and taking an unauthorized (because he tested positive) flight to Vancouver on an “extended holiday break” which ultimately led to his becoming a “free agent” (or so it seems).

Throughout this Kane has had several false claims made about him as well, including betting on NHL games, including those he took part in. It’s been an absolute whirlwind, almost impossible to keep up with. I’m not smart enough to even know what I think.

While I can appreciate that McDavid was put into a difficult situation by having to answer questions about a hypothetical Kane signing, his answer was quite poor. In fact, if I were to reasonably guess what he was trying to get at, I would say his answer sounded worse than he meant, even as he tried to walk back some of the bold stances he took against caring what the fans think. Sure, he’s just a young man who is good at hockey, but he’s also a lot more than that, as a captain, and as a person some call the “face of the NHL”. The answer has got to be better, even if it’s not that deep. Even the Holland lip service about second chances, or saying something about believing we can become better people, would be a lot better.

Of course, I’m not here to talk trash about Connor or Ken. The attitudes they showed this week were taught to them through the insular and often warped views around them. They are present in a lot of areas of life, especially those where power is left unchecked, specifically in hockey, where we had a lot of troubling news just this week. Rick Westhead has continued his intrepid reporting, bringing forth the story of officials who were fired for reporting the racism and sexual misconduct of their colleague, who was not fired.

Perhaps, the story that can bring my rant full circle is in a minor league (Junior B) in P.E.I. The abbreviated version of the story is that the league did not take a proper or sufficient stance against a player who hurled racial slurs at an opponent. After many were appalled by the league’s handling of the incident, earning much more public attention than a Junior B league should ever aspire to, the league changed their stance and vowed to improve their anti-racist protocols and policies.

It’s not that all is right in the world now, these cycles of violence and ignorance will continue. As Holland said, “it’s hard to be perfect” and while that’s true, it isn’t quite the whole story.

It is about the fact that the world, or the public, can be very forgiving if the work to improve and change happens in earnest. At the very least, most of us can be forgiven if we can be honest with ourselves and work towards atonement. It is often given for much less.

Honestly, I hope that we can all learn to be better to ourselves and to others, including Holland, McDavid, and Kane. Although I’m not trying to cast stones from glass houses, who else but the living can hold the world accountable?