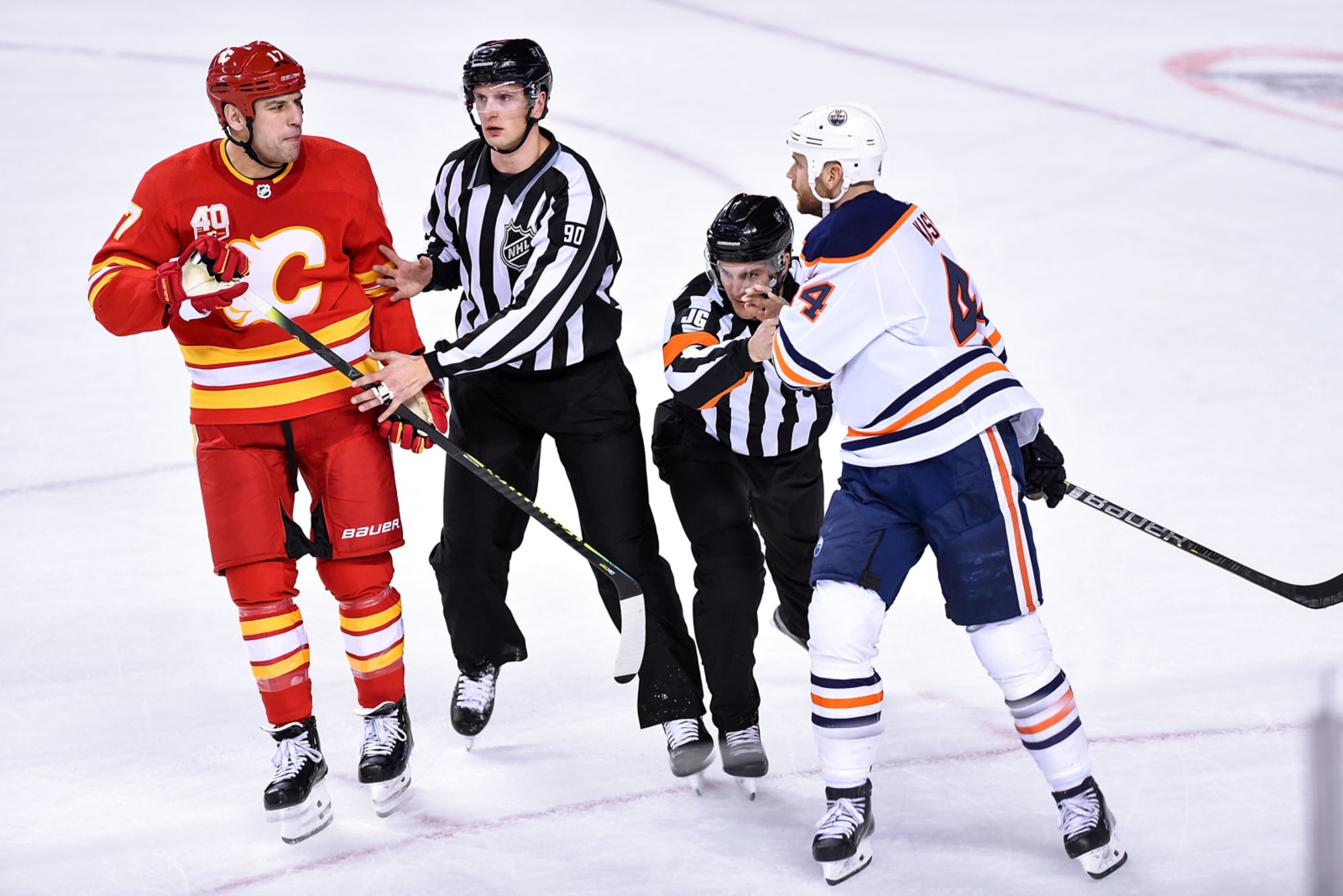 Ah, the battle of Alberta.

It truly is, as many players pointed out, always an easy game to get up for, tensions always raised as the combustible counterparts combine for a tussle. This year the stakes are even higher, if it were conceivable, as both provincial rivals find themselves as central figures to the West’s playoff picture.

By now the story arcs of their respective seasons have all but fully formed. The Flames were lost in the smoke, a franchise that seemed underwhelming and rudderless. The Monahan and Gaudreau era was fading into the distance as free agency for the latter loomed. Things were getting pretty hot, that is until Coach Sutter was given time to mold the roster to his liking. All of a sudden the Flames have a clear identity, a communal purpose, a future Jack Adams winner, and likely a division title.

The Oilers story, meanwhile, involves a coaching change as well. Elevated from AHL Bakersfield, Woodcroft has authored a much quicker turnaround, perhaps buoyed by some roster changes. The Oilers have stabilized their erratic results with a higher level of play across the ice, vastly improving their flow-of-play metrics, their goal differentials, and ultimately their playoff standing. The team is trending positively as the ruthless nature of the postseason looms large, and what better way to continue those preparations but to face off against a most inhospitable rival.

The Flames are coming off a 4-2 win against the Coyotes last night, but might very well turn to Markstrom in the crease for a second straight night. It’s likely Koskinen getting the start for the Oilers.

McDavid and Draisaitl have historically delivered down the stretch (every month except December, it would seem) and this year appears to be no different. With the two superstars playing and producing at high levels the floor for the Oilers is quite high. Kane and Yamamoto have really taken off on McDavid’s wings, and the three might stick together for the long run if they can continue.

The remainder of the forward group is a bit more in flux. Puljujarvi is still getting up to speed off the IR, but he and Hyman have lived up to their ends of the bargain in performing up to top 6 levels.

Similarly, but more surprisingly, Ryan McLeod has cemented himself into the team’s top 9, performing admirably as 3C but even more impressive when on either McDavid or Draisaitl’s wing. His development really allows Woodcroft to spread the wealth, tonight for example with RNH and Puljujarvi being on the 3rd line. Brassard had a good debut and might develop some valuable chemistry in this spot, but it’s likely he will be challenged at some point, presumably by Foegele, Kassian, or Ryan. Speaking of which, this fourth line of Foegele-Shore-Kassian has been too good to split.

The blueline appears to be settling into this look, punctuated by the Oilers two most consistent defenders Nurse and Ceci. It’s a good sign that Kulak and Barrie started off well, as they look like they are able to push Keith-Bouchard for minutes.

Although it has been smooth sailing for the Flames Sutter is still tinkering with some lineup options. It’s not necessarily bold that Lindholm is being used as the top centre, but his draft classman Sean Monahan being a healthy scratch is just one of the things I might not have believed if you told me 3 years ago or so. Perhaps it’s the injuries that have stunted his play, or perhaps he and Sutter don’t see eye to eye, but no one can be sure where his career will go from here.

Toffoli replaces Tkachuk’s scoring touch with the top line, although in a sense each of the top 3 lines have an obvious goal scoring threat. Tkachuk reunites with longtime centre Backlund, the energetic Dube elevated alongside. Mangiapane brings his shooting prowess to the intense duo of Coleman and Jarnkrok.

It’s likely that we’ll see the Flames continuing to experiment as the regular season wraps up. No one knows how it will unfold from here, but for now this deployment offers depth and reasonable support for some of the team’s newer acquisitions, putting Toffoli, Jarnkrok, and Carpenter in positions to succeed.

The defence, on the other hand, remains unchanged. These 3 pairings have been consistent from the earliest days of the season.

Just as Lindholm came into focus as the top piece up front for Sutter, it’s fair to say Rasmus Andersson has blossomed into the focal point of the blueline. His partner Hanifin is no slouch either, a smooth skater with a long-standing pedigree, contrasting well with the more abrasive stylings of Andersson. The pair can both contribute at both ends and on both special teams, it’s a combination that might be too nice to break up.

Speaking of which, Kylington has authored a fantastic breakout season, in large part thanks to his very symbiotic partnership with Tanev. Like Hanifin, Kylington is a strong skater, and he does have some good puck moving skills to turn possession into opportunities. If there is a weak point to his game it is well covered by Tanev’s strengths, physicality and in-zone defence.

A pair that makes much less sense on paper, Zadorov and Gudbranson are an interesting case study. Both were extremely high draft picks who never quite made the impact their original team’s had hoped for. Both came under a lot of scrutiny, especially from a statistical standpoint, as they bounced around the league. From the scrap heap the Flames has reforged them into a hulking, punishing, 3rd pair with strong results in all the categories that have plagued the duo over their careers.

From a conceptual team building perspective this 3rd pair, the Flames as a whole really, are an interesting topic. We think about having a clear plan or vision for players in more controlled sports such as American Football, how scheme greatly affects what a player can contribute, almost to a greater extent than overall ability, but we often see hockey as too improvisational to be so dramatically altered by coaching. In what ways can other teams across the league copy this development, forging team identities from the lost and found bins of the offseason. In what ways is this occurrence circumstantial, or perhaps impossible to replicate, either because Sutter is such an outlier or because Gudbranson and Zadorov are.