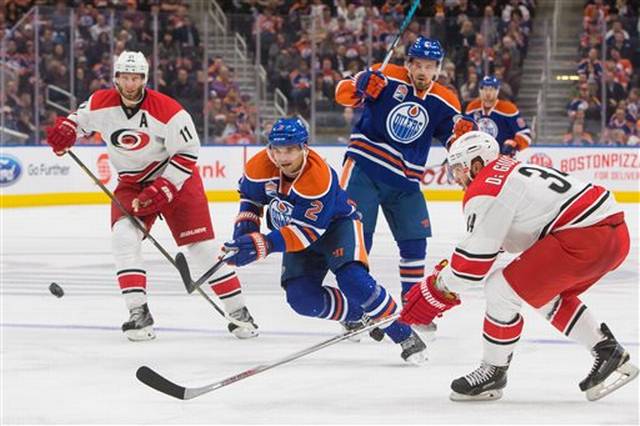 It’s rare to have an east v. west preseason game, but that is exactly what we will see tonight at Rogers Place when the Edmonton Oilers and Carolina Hurricanes hook up for the first of two meetings this preseason before their annual two regular season meetings this winter.

It’ll be good for the Oilers to get a look at a different NHL squad tonight, and it should be a good test as Carolina will bring a majority of their NHL’ers into this contest. The Oilers, for the record, will be doing the same by playing a mostly NHL lineup in this one.

The Oil made more cuts over the weekend, sending out goalie Eddie Pasquale, defenders Keegan Lowe, Caleb Jones and Ryan Mantha, and forwards Joey LaLeggia, Mitch Callahan and Grayson Downing. Interestingly the club is still carrying Kailer Yamamoto, Ty Rattie, Brad Malone and Chris Kelly on the roster as we approach the home stretch of the preseason and training camp.

The Oilers will be sporting a mostly NHL group tonight as we get into dress rehearsal territory. The club’s entire top-nine will be in the lineup tonight, and two thirds of the expected fourth line will be dressed as well. The only regular forward missing? Zack Kassian.

Defensively, the expected top-four group will be in the lineup tonight and Cam Talbot will be in net. Eric Gryba, Darnell Nurse and Yohann Auvitu, the expected final three defenders on the roster, will sit tonight in favor of Dillon Simpson and Mark Fayne.

Former WHL standout defender Jake Bean will be in the lineup tonight, while often discussed trade target Justin Faulk will skate on the top pairing.

Obviously we all want to see how the Oilers NHL lineup looks. While knowing the club is a little weak defensively tonight, I’ll be keeping a close eye on the forward group. Specifically, how does Jesse Puljujarvi look on the top line after his big outing on Saturday night?

Can Kailer Yamamoto produce against an NHL defense? Tonight will without doubt be the best lineup he plays against and I think this will be a great test for him. If Kailer looks like he belongs, he may earn himself a nine game regular season look. We really don’t have a reason to doubt him right now either.

Against the odds, Mark Fayne can still make this roster and play in the NHL. The fact he is getting a look tonight says something to me, and I’ll be watching to see how he handles the moment. A good outing could keep him around until final cuts.

Lastly, will Ryan Strome bounce back and bring a strong effort after his tough outing on Saturday? The Oilers better hope so, and if he can it could create a lethal third line with the Nuge and Jussi Jokinen.