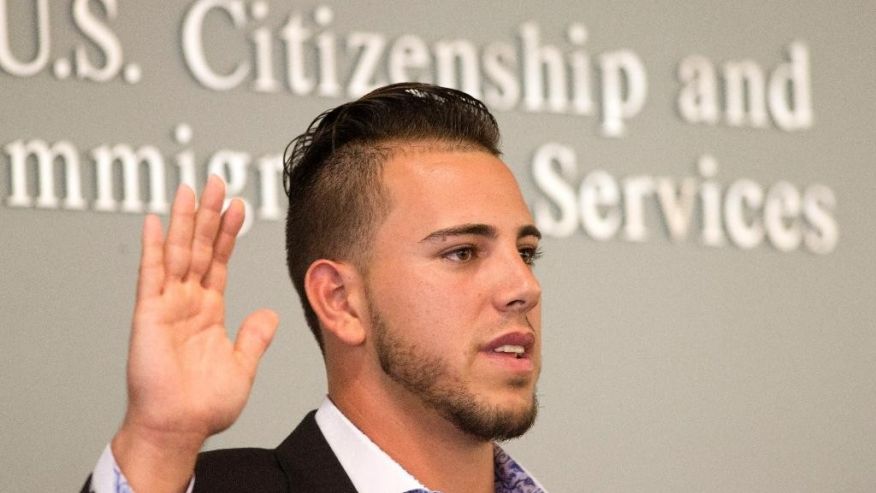 I was outside an empty Yankee Stadium this morning when Squawker Jon told me the awful news: that Miami Marlins pitcher Jose Fernandez had died in a boating accident. I couldn’t believe it. How horrible.

I couldn’t help but think of the loss of Yankee captain Thurman Munson when hearing about Fernandez, especially given Yankee Stadium looming in the background. Fernandez’s death is arguably just as gut-wrenching as Munson’s was. What a terrible day for baseball.

Yankee fans in my generation and older remember exactly what they were doing when they heard about Munson’s plane crash. In the future, we may remember where we were when we heard about Fernandez.

I was in the South Bronx because I had just finished running the New Balance Bronx 10-Mile run, and the race now ends right outside Yankee Stadium, which is very cool. This New York Road Runners’ race is very crucial for my training for the upcoming New York City Marathon. (It’s only six weeks away, something I woke up in last night in a panic over. Yikes!)

Jon and I always, always talk after every race I do, and I give him the recap. But today was a little different. I had had a terrific race –a PR (personal record) for me, and my best per mile rate ever with NYRR, 1:59:01 for 10 miles, and 11:55 per mile. This also meant that I might finally be able to Escape From Corral L, the last corral for runners in New York Road Runner races. I needed to have an 11:29 per mile average in a 10K to do that. This was one of my goals this year. (I found out later in the afternoon that I indeed achieved that goal.)

So I was in a great mood after having a fun race. I remember thinking to myself afterwards, “This is what joy feels like.” I had also posed for pictures, and then ran into my friend Jacky and got some more pix as well. I also got to meet legendary DJ Kool Herc, who was doing his thing at the event.

So I was excited to share the news of my morning. When I went to call Jon and tell him that I achieved my goal of finishing this race in under two hours,  he stopped me before I could talk, and said he had some sad baseball news. Then he told me about Fernandez.

Baseball doesn’t always do the greatest job marketing their big names, but Fernandez was a true superstar. And a brave person, too. Jon and I follow MLB closely, but even we didn’t know the whole story of how the All-Star fled Cuba four times as a teen before finally succeeding, and even spent some time in prison for daring to leave Fidel Castro’s dictatorship. He also saved his mother from drowning when he was a teenager.

I didn’t fully absorb the news of Fernandez’s untimely death until I was in the 161st Street subway station waiting for the D train, and was reading various stories about him. I ended up sitting there weeping over his passing. Especially when I heard that he recently announced that his girlfriend was pregnant with his child.

When I got to Jon’s, we watched the beginning of the Mets game, and I cried some more when Keith Hernandez, of all people, broke down about Fernandez’s death. He talked about calling old Mets teammate Bobby Ojeda today (Ojeda narrowly missed dying in a boating accident in 1993.) Hernandez talked about the fragility of life, and implored viewers: “Kiss your loved ones, call your loved ones. Because life can be cut off.” That made me cry some more.

It reminded me that tomorrow is not promised, and how, if our lives were to end today, would we have let the people in our life that we value know that we value them? Very sobering thought. I hope that my loved ones know how I feel, but it made me want to hug them all a little tighter today.