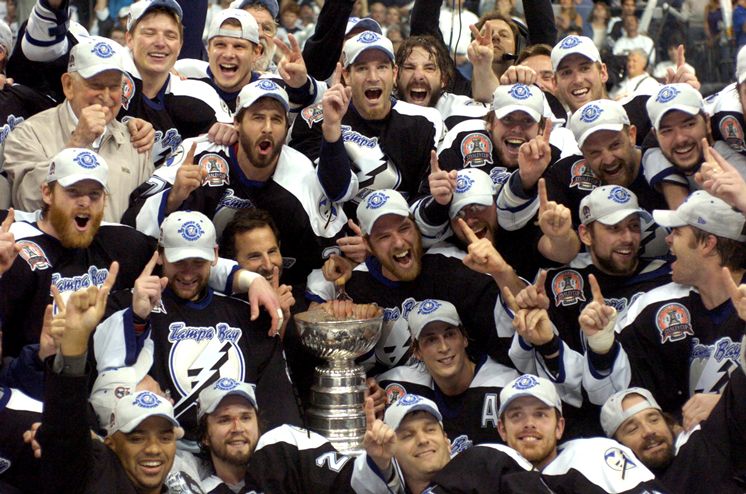 It’s hard not to be inspired seeing Nashville’s response to the Predators making their first Stanley Cup Final. A non-traditional, Southern market has fallen in love with the game of hockey. It’s wonderful to see more people getting involved in the sport no matter where they live but there’s a certain amount of pride in seeing other Sunbelt teams succeed. There’s a familiarity to this as well. Look no further than the Tampa Bay Lightning’s championship win thirteen years ago today.

Events like the Stanley Cup Final bring an incredible amount of excitement to a community. People who may not have ever attended a hockey game before are tuning in to see their hometown team try to reach the apex of their sport. New fans attend rallies or watch parties. They make connections and new friends. Judging by the photos of Broadway and the shoulder to shoulder crowds, they’re having an incredible time. And why not? Thirteen years ago an expansion team in Florida hoisted the Stanley Cup on their home ice after a contentious seven game series. A few days later they celebrated with a parade through downtown. Players were seated in convertibles as the party wound its way through the sunny, humid streets. As more time passes it’s easier to view that victory through the lens of history. A ton of new hockey fans were born in 2004. More came aboard in 2011, 2015, and 2016. Tampa is a great hockey town regardless of its climate. People are what contribute to the hockey culture in a region and deep playoff runs bring more into the fold.

As we get further away from the Tampa Bay Lightning’s Stanley Cup victory in 2004 it’s easy to forget some of the little things. You know Brad Richards won the Conn Smythe Trophy after the series concluded but you may forget just how prolific he was until looking at the numbers.

The image of two captains fighting is emblazoned on your memory but you don’t recall exactly why Vincent Lecavalier and Jarome Iginla dropped the gloves.

John Tortorella’s “Shut your yap” comment to Ken Hitchcock lives on in lore but fans may have forgotten it came after the Lightning took a big loss in the Eastern Conference Finals. Torts focused the attention on himself and off his players’ recent struggles.

The effects of the series itself through the next thirteen years may not always be visible but they’re there. There’s a definite through line from that victory to the franchise’s current success.

It happened here and it’s fun seeing it happen again somewhere else. Happy Cup-iversary Lightning. Let’s make another run next year. In the meantime: Go Preds.