OTBB: 10 MLB Teams With a Very Important Offseason Ahead of Them 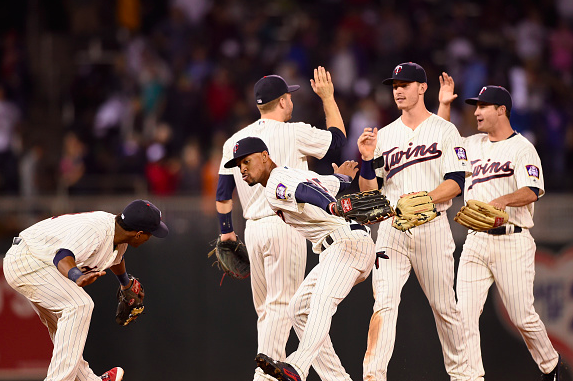 Editor’s Note: This post originally appeared on On The Bench Baseball.

The 2017 MLB regular season is the furthest thing from our minds right now with the postseason in full swing, but not for the majority of the league.

Most are at home watching the playoffs, trying to figure out how they could be playing baseball next October instead of sitting on their respective couches. The winter months don’t include any on-field action, but the Hot Stove does plenty to keep us warm and occupied until pitchers and catchers report to Spring Training.

Before the slate officially gets wiped clean for the coming year, front offices around baseball put in a lot of hours to decide what pieces could make their team a playoff contender. Here are 10 MLB teams who have a very important few months ahead:

After a surprising 2015 campaign, this past year was nothing short of a complete disaster for the Twins. It could actually be a blessing in disguise, though.

Since 2011, that ’15 season was the only time Minnesota won more than 70 games. The club limped toward an MLB-worst 59-103 record, which finally spurred them to make a change by cutting ties with longtime general manager, Terry Ryan.

Bringing in new leadership from outside the organization means a fresh perspective from incoming Chief Baseball Officer, Derek Falvey. That includes an emphasis on analytics, a department in which the Twins have lacked.

Will they immediately be competitive again? No, but building the foundation starts this winter. That includes developing a young core that includes Miguel Sano, Byron Buxton and Jose Berrios while seeing which veterans should or shouldn’t be used as trade bait in the coming months.

The tragic death of Jose Fernandez impacts the Marlins far beyond the diamond, but they’ll soon have to focus on how to fill the void in their rotation. Wei-Yin Chen didn’t have a great season, but he was expected to be part of the one-two punch at the top with the late, great right-hander.

With a mostly unimpressive crop of free-agent starting pitchers set to become available, it will be tough for Miami to replace the on-field production (let alone the clubhouse presence) they’ve lost in Fernandez.

However, re-signing Martin Prado will probably be their best move of the winter. Not only is he a solid ballplayer, but he’s also a huge veteran presence for a mostly young team. In order to fill out their rotation, Miami may have to trade some MLB talent, which could mean Marcell Ozuna could once again become available.

It’s amazing how the perception of a club’s future can change in the span of six months, isn’t it?

The Yankees began this year with some young talent, but they didn’t even have the brightest future in their own media market. GM Brian Cashman’s strategic trade deadline sell-off gives New York one of the game’s deepest farm systems while remaining competitive.

Cashman has openly admitted that this club is more than one or two acquisitions from a championship, which is why youngsters will get opportunities to fill vacancies at first base and the outfield. The biggest concern will once again be the starting rotation, though.

Making a big splash for a frontline starter like Chris Sale is the kind of move many assume the Yankees could make…mostly because they have in the past. It will be interesting to see how New York fills out the remaining rotation spots with the underwhelming free-agent class and even more big contracts coming of the books next winter.

GM Jerry Dipoto did a masterful job of turning over Seattle’s roster last winter during his first year on the job. There were questions as to how improved the Mariners would actually be, but the results were rather impressive: 10 games better than a disappointing 2015 and in the AL Wild Card race until the very end.

Why is this offseason so important? Time is ticking on Seattle’s current core of Robinson Cano, Nelson Cruz, Kyle Seager and Felix Hernandez, which I recently mentioned. The Los Angeles Angels and Oakland Athletics seem to be in no-man’s land, but the rest of the AL West will be tough to navigate.

The Texas Rangers aren’t going anywhere and the Houston Astros collectively have a much younger core to build around. Dipoto must build upon the momentum made in 2016, and can start with solidifying first base and the outfield.

The White Sox have seemingly “gone for it” each of the last two winters, but have nothing but mediocre results to show for it. This past year was especially painful – they were 24-10 on May 9 and considered one of baseball’s best teams, but finished just 78-84.

Robin Ventura is out and Rick Renteria is now in as manager, but the front office needs to pick a vision and stick to it. Adam Eaton and Jose Abreu are solid offensive players to build around, but the key to this team succeeding is Chris Sale and Jose Quintana leading the rotation.

Will they retain them? Will they trade them? That’s up for anyone’s determination at this point. President Kenny Williams and GM Rick Hahn will surely explore the thought because it would be foolish not to. Whatever the decision, they have to commit and ultimately stick with it instead of attempting to straddle both buckets.

GM Neal Huntington referred to 2016 as a “bridge year” for the Pirates when referring to the current players in the team’s core, but the on-field results weren’t very good throughout that process.

There were bright spots – Gregory Polanco flashed his power potential, while Jameson Taillon shook off two years lost to injury to produce an impressive rookie campaign. However, Pittsburgh has quickly come to a fork in the road this winter. Two mainstays in their core – Andrew McCutchen and Gerrit Cole – are likely not in long-term plans.

It behooves the Pirates to try and win with these two if they’re both still on the roster on Opening Day. This means building a better rotation than the disaster that included Jon Niese, Jeff Locke and Ryan Vogelsong.

Pitching coach Ray Searage works magic quite often, but he’s also not a miracle worker. Charlie Wilmoth of MLB Trade Rumors did refer to Andrew Cashner and Edinson Volquez as two higher upside options for the rotation than the ones Pittsburgh acquired last winter.

We once again see why being the “winners of the offseason” doesn’t actually mean anything. Jean Segura had a career year, but Tony La Russa and Dave Stewart gutted the farm system for the middle infielder and Shelby Miller, along with stretching the payroll to unprecedented heights for Zack Greinke.

Less than a year after being viewed as NL West competitors, Arizona is blowing it all up – manager Chip Hale is gone, so is Stewart and La Russa’s fate is yet to be determined. There won’t be much player acquisition happening in the desert this winter, but filling the leadership vacancies can make a huge impact.

The Dbacks saw first-hand how hiring Kurt Gibson as manager momentarily turned this franchise around and put them back in the playoffs. There are a lot of young, talented players here – it’s now a matter of finding the right leader for the foreseeable future.

Fresh off two consecutive World Series runs, the window is already starting to close for the Royals. GM Dayton Moore knew what was coming, which is why he stretched the payroll and committed $140 million to Ian Kennedy and Alex Gordon last winter.

The front office is now tasked with shedding payroll in advance of 2017. That includes having tough discussions over which player from their “championship core” is worth trading away, if any. It’s important for Kansas City to make the right moves this winter, because if they don’t, the impact could be felt for the next few years.

On the morning of August 20, the Mets’ season looked nothing short of a dumpster fire. Instead of getting fired himself, manager Terry Collins watched his club embark on an improbable playoff run that was cut short by Madison Bumgarner in the NL Wild Card game.

That was the fun part, but now the hard part is coming for GM Sandy Alderson and his team. Yoenis Cespedes will almost certainly opt out of his deal – how badly will they try to re-sign him? What about Neil Walker? Is Lucas Duda worthy enough to play first base every day?

The rotation will hopefully be healthy once again, but they obviously see the value in having viable options behind them. New York’s competition clock is ticking with the service time of its young, stud starting pitchers.

Players are probably still dousing one another after sweeping the Rangers and earning a spot in the ALCS, but there’s pressure to go all the way this October because of looming offseason questions.

The rotation was one of the best and most affordable ones in baseball, which is good because financial flexibility will be necessary to address the offense. Jose Bautista had a rough regular season, but is heating up at the right time. Meanwhile, Edwin Encarnacion continues hitting the cover off the ball.

They’re likely in line for major paydays, but it’s unlikely they’ll both return to Toronto, and maybe neither will. If they don’t, Mark Shapiro and his team must find a way to replace the on-field production and clubhouse presence in a big way.

Which of these MLB teams has the most important winter of decisions ahead of them?