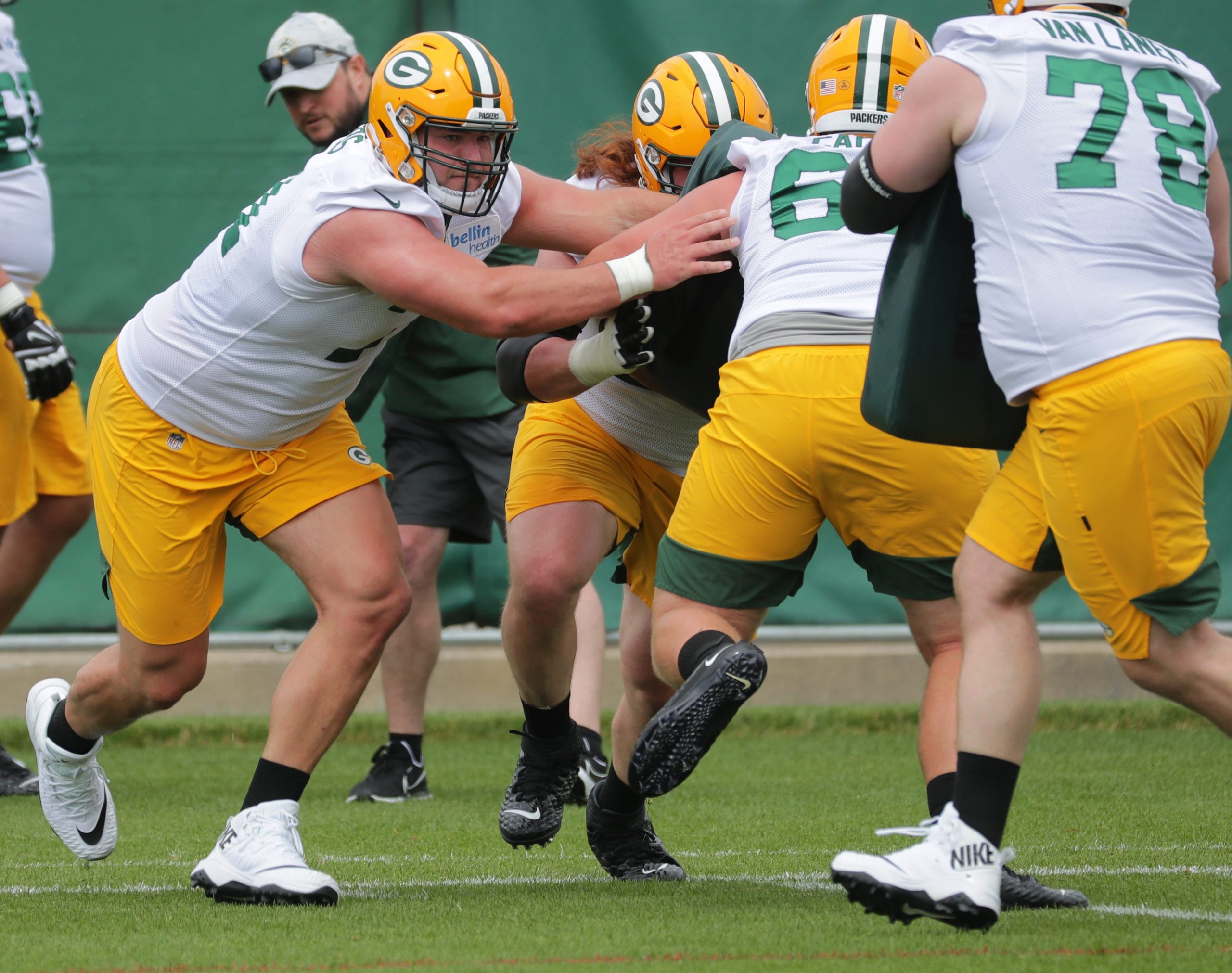 The Packers will open training camp for the 2021 in a few days. This is the last in a series of in-depth articles previewing each position group for the Packers. We will discuss each player at the position, provide a depth chart and analysis of each player on the 90-man roster, their skill set, what they need to improve on and what is expected of them in 2021.

Changes are coming to the offensive line. Center Corey Linsley left via free agency while All Pro left tackle David Bakhtiari’s status for the start of the season remains up in the air as he continues to rehab from knee surgery after suffering an injury in December.

The Packers selected six interior offensive linemen in the last two drafts so there is a lot of competition here. In addition, many players such as Elgton Jenkins and Billy Turner, can play multiple positions which makes it more difficult to break down a depth chart by position. I will list the projected starting five and indicate those players who can play multiple positions whenever possible.

Here is a look at the Packers depth chart along the offensive line entering training camp:

Bakhtiari remains one of the best tackles in the game and his specialty is pass blocking. He has protected Aaron Rodgers’ blindside since coming into the league in 2013.

He has earned either All Pro or Pro Bowl honors in four of the last five seasons and is a leader in the locker room as well.

The Packers don’t know exactly when he’ll be available to play again this fall. During OTAs, Bakhtiari was working out on the side as he rehabbed his knee. Look for the Packers to be conservative with Bakhtiari’s return.

The former University of Colorado star signed a long-term deal with the Packers last season and should be a big part of the Packers offensive line for the foreseeable future.

Jenkins is one of the most versatile linemen in the NFL today and he can play all five positions along the offensive line. Don’t be surprised if he starts the season at left tackle if Bakhtiari isn’t ready to start in Week 1.

Jenkins earned Pro Bowl honors for the first time in his career last year and took snaps at four of the five positions along the line at some point.

He is smart, hard-working and still hasn’t reached his full potential as an NFL player yet. Look for Jenkins to become a dominant force for the Packers at whatever position he plays. When he and Bakhtiari are both in the lineup, they give the team one of the best left sides of the offensive line in the league.

How quickly Myers adjusts to playing in the NFL will be a big key for the Packers offensive line this season. He is smart, strong and tough and is projected to be a long-term starter in the middle of the Green Bay offensive line.

Patrick could end keeping his spot as the starting right guard or he could find himself a cap casualty. Last year was Patrick’s first as a starter and he did a solid job. Patrick is versatile and can play center and both guard positions.

Patrick is a strong lineman but he sometimes can be overmatched against linemen with elite quickness. The Packers have several younger and less expensive interior linemen to choose from so if Patrick falters in camp, he could find himself out of a job.

Turner can play tackle or guard but he had a stronger season last year at right tackle than he did in 2019 at right guard. The Packers may move him to left tackle early in the season if Bakhtiari isn’t ready to play in Week 1.

Turner is a smart football player and respected in the locker room. His versatility adds to his value and his experience makes him an important part of the Green Bay offensive line this season.

Runyan will primarily play guard but he can also move back to tackle in a pinch as that was his position at Michigan. He filled in at guard for parts of three games as a rookie last year and played like he belonged. He will be fighting for one of the starting guard spots in training camp. Runyan’s chances to start in Week 1 go up if Bakhtiari isn’t ready to start the season and Jenkins is moved to tackle temporarily. He may also battle with Patrick for the right guard spot.

Braden is listed as a guard but played tackle in college but also lined up at left tackle during OTAs and got praise from the coaching staff.

The former Michigan star played four games with the Packers last year after spending two seasons with the Jets.

Braden is strong and tenacious and hopes his versatility and experience will give him an edge in training camp.

The Packers drafted Newman in the fourth round of this year’s draft. Like so many other offensive linemen on the roster, Newman can play guard or tackle but is more likely to be slotted inside in the NFL.

Newman has good mobility and can block players on the second level on sweeps or screens. He needs to work on his pad level a bit and adjust to the NFL but if he makes that adjustment quickly, he could earn some playing time this year and may even compete for a starting spot before the season is over.

This is Nijman’s third camp with the Packers and perhaps his final chance to show he can play in the NFL. The Packers have been high on his raw athletic ability and size but now Nijman needs to show that talent can translate to solid play.

At 6’7” and 314 pounds, Nijman is well built and quick but the former Virginia Tech star needs to show enough progress to earn a roster spot. The Packers are looking for a swing tackle and Nijman is one of the top candidates for that job.

The former Indiana star missed his rookie season due to an injury he suffered back in college. He has the strength to take on defenders in a phone booth but needs to show the mobility and ability to adjust his feet to succeed in the NFL.

Stepaniak is being overlooked by many experts, but he’s a tough kid who excelled in college and may surprise some observers and earn a roster spot on the team this season.

The former Wisconsin star was drafted in the sixth round of this year’s draft. Van Lanen can play multiple positions and will be fighting for a roster spot or a spot on the practice squad.

The Packers like his toughness and feel he has the potential to develop into a quality lineman down the road. Don’t look for a big contribution from Van Lanen on offense in his rookie year although a strong showing in camp could help him secure a roster spot if he can contribute on special teams.

Hanson was selected by the Packers in the sixth round of last year’s draft but spent the season on the practice squad and the injured reserve.  He was a four-year starter at Oregon who wants his chance to make an NFL roster.

The center will be fighting for playing time if he’s healthy and ready to go. The addition of Myers may make it more difficult for Hanson to earn the backup center spot since both Jenkins and Patrick can also play the position.

The first year man out of North Dakota State spent 2020 on the Packers practice squad. He was elevated to the active roster for one game but did not play. Johnson plays guard in Green Bay although he played both guard and tackle in college.

Johnson faces a big challenge to make the team because of the large number of players fighting for roster spots at his position many of whom were drafted.

Dietzen has the versatility that the Packers like in their offensive linemen. In college, he started games for the Badgers at left tackle, left guard and right guard.

Dietzen has good footspeed but needs to get stronger to handle the bigger defensive linemen in the NFL and to stave off bull rushers.

Cronk can play multiple positions along the line and he is an all-out effort guy. His size, speed and strength are not up to ideal NFL standards and that’s why he wasn’t drafted. He will have an uphill climb to earn a spot on the roster or practice squad this year.

The San Diego State alum signed with the Packers as an undrafted free agent this May. He can play both tackle and guard. He is a stronger pass blocker than run blocker but also faces long odds to make the Packers roster this year.