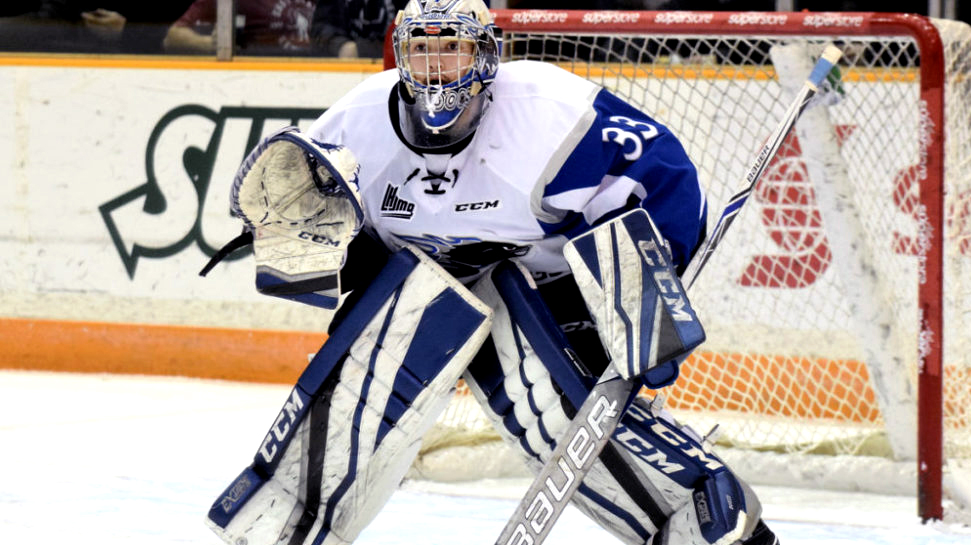 Last weekend, the Penguins added five players to their prospect cupboard. I did a quick hit on Friday about their first first-round selection in five years, Sam Poulin. Today, we’ll meet the other prospects selected a little bit and mention a handful of players who will be on display at the team’s development camp this week.

The biggest note here is that Legare, who played with Baie-Comeau Drakkar in the QMJHL last season, is a player the Penguins really wanted. A player they wanted so badly they swapped three picks to move up 24 spots in the draft to get him when they really could’ve used the two additional players. The 6′ forward has played at both center and right wing though the Penguins list him as a RW on their prospect camp roster. His 45 goals lead the Drakkar and tied for second in the entire QMJHL last year. Suffice it to say, the kid can score.

But unlike other players they’ve taken from the Q in the recent past, he isn’t just a goal scorer. He has worked on his set-up skills and his strong core makes him a monster on the puck. His skating could use some work but is trending in the right direction. Some even say he’s closer to NHL-ready than the teams first-rounder as he’s shown the drive to continuously improve.

After Legare, due to their trade, the team didn’t have another pick until the 5th round but they made it count. Judd Caufield, who was one a record-breaking 17 players from the USNTDP selected in the draft, was a player many expected to go sooner. Ranked 67th among NA skaters in the final rankings his tumble to 145 was a bit of a surprise but a happy one for his new NHL team. The biggest guy selected by the Penguins this year, Caufield clocks in at 6’4″ and is known as a power forward. He scores well complimentary but is consistently called “better away from the puck.”

The final two picks the team put in are what we’ve come to expect from them especially in the later rounds. Valtteri Puustinen is a small water-bug of an overager. He’s 20 and coming off a great year with Liiga Champion (and the team of Pens Prospect Hallander) HPK. His nickname is apparently “The Phil Kessel of Kuopio,” for his lethal shot. Based off of what I understand (from a web story I had to translate) he may be under contract for 2019-2020 to HPK but is a player we’ll likely see in North America soon.

Penguins select winger Valtteri Puustinen in the seventh round. Overager had strong Liiga playoffs with HPK. Very good skater and energetic, always moving and has a quick first step. Defensively reliable and makes plays – check out this assist from the playoffs. #2019NHLDraft pic.twitter.com/NO40je6AJ4

The other pick the Penguins made in the 7th round, after trading the 2020 7th to get back into it, was Santeri Airola whose name got the internet talking immediately but is just the kind of defender you expect the Penguins to draft. He bounced around between three leagues last season but still managed to put up 46 points in 54 games. He’s 5’11” and what some would call a reach but He’s a right shot D who put up strong numbers at a young age.

Then, this morning we got the full download on the prospects attending Penguins Prospect camp this week. Like last year, the team isn’t bringing a lot of players with North American professional experience. A shift that I think is really good for them as they need to focus on Undrafted Free Agents to fill out their AHL and ECHL rosters as well as the prospect cupboards.

Of the 41 players invited only 10 have dressed for a team in the Penguins Organization. And of those 10, all but two have played fewer than 10 professional games in North America. Renars Kratsenbergs leads the way in with a full season played for the Wheeling Nailers last year. The Latvian forward finished third on the team in points. While Jake Lucchini played 15 games in Wilkes-Barre/Scranton last season on an amateur tryout after his Michigan Tech season ended.

The goalie situation was a major stumbling block for the WBS Penguins last season and it appears they’re working hard to rectify that his year. Emil Larmi, a 22 year-old Finn, won the Liiga title last year. While Alex D’Orio played a combined 49 games between the QMJHL’s St. Johns and Baie-Comeau. Both will be at prospect camp and both will likely be in WBS next year and if the team moves Jarry look for one to be the starter.

For the defense, Jon Lizotte is already signed to an AHL-only deal for this upcoming season and Roni Allen is at camp as an unsigned European Free Agent. Either one could end up making an impact moving forward. Also, keep an eye on Clayton Phillips and Calen Addison – both will return to their college and junior clubs respectively but are interesting prospects.

The forwards include Billy Moskal, a 19-year-old London Knights product who doubled his goal output in 2018-2019. If the situation seems familiar that’s because it is. Sam Miletic, current Penguins prospect who just finished a very strong rookie AHL season, was invited to prospect and then regular camp out of London after a solid overage season before ultimately signing an entry-level deal in September 2017. And because the Penguins do operate on an “if it’s not broke don’t fix it” policy they also invited Jared Spooner to camp who plays for the same college program that produced Teddy Blueger. Spooner nearly doubled his goal output in his sophomore season and finished tied for third on the team in assists. Both could play themselves into ELCs.