Penn State may be a long-shot for a playoff run in 2019, but plenty of intrigue to come 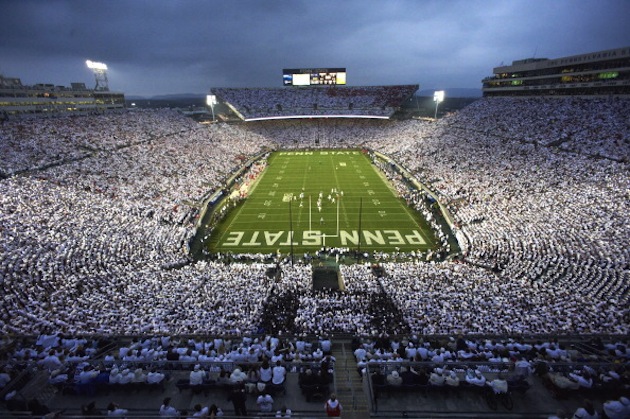 With the 2018 season in the books, all eyes are shifting to the 2019 season in Happy Valley as Penn State undergoes some changes with the roster and on the coaching staff. A new starting quarterback, a new starting running back, a new wide receivers coach and some other positions ready to have some new faces step up are all a part of what makes the upcoming season a mix of a mystery and a reason to be excited about the next chapter of Penn State football.

Looking into odds for the upcoming season, numbers found on sports betting sites indicate there’s low expectations for 2019 Nittany Lions. Their average odds to win the national championship are +3700. With the ongoing list of players who have dropped out from the program, it seems the cons outweigh the pros and 2019 is likely to be a step back compared to 2018, when Penn State was around +2100 to win the title in the preseason. It’ll be a good idea to go back and check on those odds in a few months to see if they have changed but with the number of players leaving the Penn State football program, it doesn’t look too good.

That shouldn’t be unexpected, of course. Penn State loses a three-year starter at quarterback with Trace McSorley graduating. Either Tommy Stevens or Sean Clifford likely become the next starting quarterback, and it is fair to wonder just how well that will play out on a full-time basis in the fall. Miles Sanders is off to the NFL too, so a new starting running back needs to be found, with Ricky Slade likely taking on the role. And with so many key drops by receivers in the 2018 season, Penn State will hope new wide receivers coach and passing game coordinator Gerad Parker from Duke will help solve some of those problems.

Penn State may be a bit of a question mark heading into the 2019 season, but it also happens at a time when there are legitimate questions about other key teams within the Big Ten and the Big Ten East. Ohio State has a new head coach and will have to wait to see what their quarterback situation may look like. Michigan is sending a bunch of key defensive players off to the NFL and the Wolverines have to travel to Beaver Stadium this fall. Michigan State is, well, Michigan State so you never know quite what will happen with the Spartans. Looking at things right now, Penn State could either make a run for the division crown and play in the Big Ten championship game or finish in fourth place in the East.

This is why the odds of Penn State are as long as they are for a national championship run. Penn State may still be in a much better position today than they were when James Franklin took over thanks to efforts in recruiting, but nobody is confusing this team for Alabama, Clemson or even Ohio State right now. As Franklin claimed last season after the loss to the Buckeyes, this program is not elite. That doesn’t mean they can’t be elite, but the realistic expectations right now at the end of January 2019 should be a bit tempered for the fall.