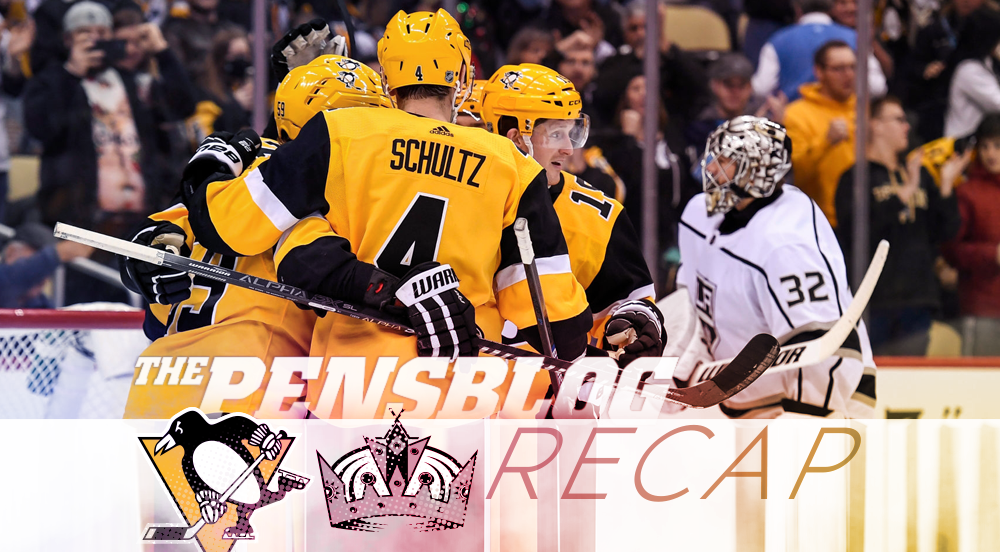 The Penguins right now are a lot like the zombies from Call of Duty.

No matter how many times you shoot them, place dynamite, booby traps, or blow them up, they just absolutely refuse to die.

That sure as hell was true at the Paint Can on Saturday night.

Prior to the game, HCMS let everyone know that Evgeni Malkin would be out for the second game in a row with an illness.

This adds to the list of Crosby, Hornqvist, Bjugstad, and Dumoulin all being out.

Also, say a prayer for Alex Galchenyuk. Ain’t nothing wrong with him, he’s just bad.

Saturday night, injuries and illnesses up and down the lineup and the wretched LA Kings in town. Suppose we’re doing this.

Every 105.9 The X drivetime radio caller absolutely livid over that first-line left-winger.

The first ten minutes came and went. The Penguins power play slipped by with not much else but a whimper and it was what you would expect between a team that should rebuild and refuses to and a team that is without two of the best players of all-time in Nick Bjugstad and Patric Hornqvist.

Then it got interesting for a couple of minutes.

The Kings would open the scoring thanks to Austin Wagner who, to my surprise, is not a character from Red Dead Redemption II but an actual NHL player with three (3) goals this season.

Gotta talk about Kris Letang on this goal.

Just poor awareness by 58 to chase a hit with what was essentially a 3-on-2 developing.

Now, yes, Blueger is back but he, like Letang, loses sight of Wagner sneaking in on the weak side of the ice.

Letang steps up and crushes Pasta Lizotte, freeing the puck for Kempe and also taking both Blueger and Letang out of the play.

This gives Kempe a step on Marino and remember how we said everyone missed Wagner sneaking in?

Teddy Blueger found himself in front of the net battling “Totally Not A Computer-Generated Name” Sean Walker as Brandon Tanev stepped to the front. As this happened, Kurtis MacDipshit gave up chasing Tanev and retreated to the net mouth where he cross-checked Blueger in the back, knocking him down and “impeding” Jonathan “Quick.”

No matter, that’s hockey, baby! It’s a physical sport and sometimes you get knocked down battling for position in front.

Kings would challenge and the Wheel of Interference landed on no goal.

“But Pat, his stick was in there!”

Shut up, Quick embellished. He always has.

If the Kings’ first goal was an exercise in Letang being too aggressive, their second goal was a case study in Letang not being aggressive enough.

After Sean Walker retrieves a dump in, Letang plays it well enough, getting to the front of the net to prevent a pass through to the high-danger area of the ice. Walker, to his credit, makes a brilliant pass to Toffoli (future Penguin, imo) and Letang does…something? Not advocating for 1990s clutch and grab hockey but if the first goal was Letang’s fault for chasing a hit…screw it, in for a penny, in for a pound, lay the body on Toffoli and keep him from getting a shot away.

Sidebar, Jarry has been nothing short of exceptional the last few weeks but Toffoli’s goal…let’s just say that was a rough one.

That would about do it for the first.

LA wouldn’t quite “dominate” the first but they had a slight CF% advantage and the advantage that mattered – 2-0.

Did you think the Penguins were out of it? No one would blame you if you did.

Bryan Rust, however, had other plans.

A 3-on-2 into the Kings’ zone developed with Jake-N-Bake leading the charge. The Penguins played this exactly how you draw it up. Guentzel with possession down the wing, McCann broke to the front of the net, drawing a defender with him and Rust slides to the middle for a pass. Guentzel finds him and rather than Rust immediately shooting, holds on to the puck for just a second long enough to get a clean look at Quick and buries it.

Near the end of the period, the Penguins would find themselves with an abbreviated 5-on-3 power play.

Fun fact of the night from Seth Rorabaugh: The Penguins have not scored a 5-on-3 goal in over two years. The last time was November 25, 2017 against Tampa.

The Pens, again, do exactly what you need to do in this scenario. They work the puck from high to low pulling the Kings out of position and opening a seam in the slot. Letang would work the puck low to Guentzel and as the Kings transitioned their PK from high to low, they’d lose sight of Rust. Rust got himself to a scoring position right in front and Guentzel slid the puck through Matt Roy to rust who elevated the puck over Quick’s glove and tying this bad boy up.

The Penguins, with no Crosby, Malkin, Dumoulin, Hornqvist, or Bjugstad and getting dominated for the most part on the shot clock were tied after 40. Unreal effort.

With about 10 minutes remaining, it was Teddy Blueger that would break the deadlock off a bit of a broken play.

Bryan Rust would send a floater to the net with no other real options and Matt Roy would have the puck deflect off of him to Quick and he wouldn’t be able to track the puck through his legs, which Blueger found. Not gonna get much easier than that.

A strange game that would see the Penguins essentially beaten in all boxcar stats and analytics would only get stranger.

During 4-on-4 play, Jared McCann would outwork Matt Roy (boy, rough night for him) and bring the puck out of the corner to the high slot. McCann put the puck on net and again, Quick would get a piece but not all of it. A rebound would pop out Jack Johnson who lifted a rebound off of Quick’s glove and into the net.

#JackJohnsonASG, get on board or get out of the way.

The way this game had gone, you just knew that wouldn’t be it. Kings had been knocking at the door all night.

Jeff Carter, who is still in the league, folks, took a fairly harmless slap shot from the half wall that Jarry would kick right out to Kyle Clifford who had a yawning cage and made absolutely no mistake.

With just under four minutes remaining and the Kings threatening, we’d be back to even.

Michael Quesadilla would be the beneficiary of a net-front scramble with a mass of bodies in front. I’m never one to compliment NHL officiating but full marks to this ref getting in good position to see the puck was never covered.

Kahun tried his best to play goalie but to no avail.

Quick made an absolutely unrealistic save on Blueger off a rebound from a Rust partial breakaway and that would be about all OT had.

Bryan Rust would be the only one to score and it was a thing of beauty.