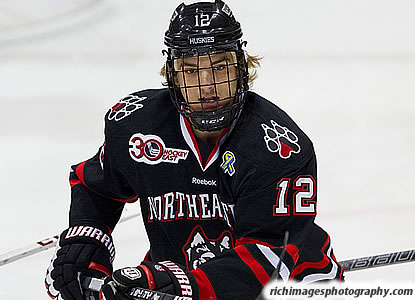 It was announced by the Pittsburgh Penguins that they had signed college free agent forward Zach Aston-Reese out of Northeastern to a 2-year entry level contract, on March 14th, 2017. The contract will run through the 2017-18 and 2018-19 seasons.

Aston-Reese’s most recent season (which happened to be his senior year) with Northeastern included him scoring 31 goals and 32 assists for 63 points, in just 41 games. His 31 goals is tops among the NCAA. Him signing a contract with the Pens likely means he’ll be reporting to the Wilkes-Barre/Scranton Penguins.

With multiple reports claiming that Pens draft pick Blaine Byron will likely be opting for free agency, the signing of Aston-Reese more than makes up for it, as Aston-Reese eclipses Byron in skill by quite a margin.

All in all, this is a great move by general manager Jim Rutherford, as multiple other teams had interest in Aston-Reese. Never a bad thing to acquire more depth with such a low risk and such a high reward involved.