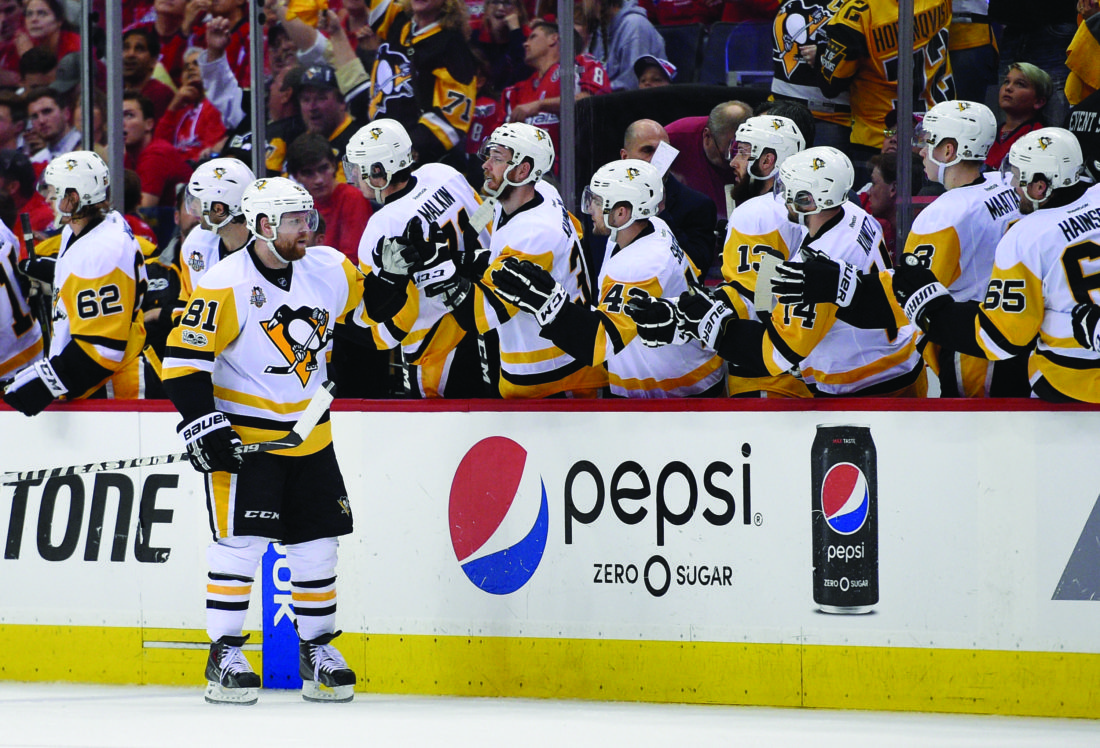 Despite starting down a 141-66 shot-attempt deficit and a 69-30 scoring chance deficit through the first two games of the series, the Penguins are coming home with a 2-0 series lead.

Marc-Andre Fleury has been spectacular, the Penguins star players are rolling in a truly remarkable way, and they continue to cash in on their scoring chances at an unbelievable rate.

Before we get to game three, let’s take a quick peek at some notable video clips that should highlight the underlying story behind this series so far.

When you have an elite sniper like Phil Kessel on your team, the challenge is always making sure you can put him in a position to score goals, especially on the power-play.

One thing the Penguins have perfected is what I like to call the “Kessel Walk.”

It puts Kessel in a position where he can “walk” the puck off the wall and directly into a scoring lane with ample amounts of time and space to snipe.

This is a genius piece of work by the Penguins to get Kessel the puck in a shooting lane. He starts this sequence completely removed from the play in a non-threatening area. Because of the Penguins alignment on the power-play, the focus is everywhere but the far corner of the ice. Malkin is skating through the slot, there’s viable shot options from the point, Guentzel has a man occupied in front of the net, and Kessel can walk up the wall into a shooting position.

Kessel doesn’t have anything to worry about here except a little bit of token pressure. He’s got the time and space to pick his head up and identify his spot before he takes a shot. When you see Kessel spin off the wall in this posture, it’s bad news for the opposition.

The Penguins zone exits still remain a major area of concern. We’ve heard Mike Sullivan preach about them all year long and there haven’t really been any tangible signs that things are improving in that area.

I think the Penguins zone exit problem is actually symptomatic of their system as a whole. The Penguins love to use the wall to break the puck out of the zone. More often than not, you’ll see them use subtle chip plays off the boards or area passes that require the speedy forwards to get to a loose puck before a defender. However, the reality of the situation is that area passes aren’t always reliable. If a forward isn’t available in the area of the pass, it’s a clear cut turnover.

We’ve been saying this all year, but the Penguins defense really needs to be cognizant of where the puck is going when they attempt one of these area passes. If the play isn’t there, it’s better to opt for the Murphy-dump or to simple whoa-up and wait for help. Turning the puck over at the defensive blueline puts a lot of pressure on your goaltender and is a great way to create unnecessary chaos in your own end.

Here’s a great example of what we’re discussing here. Ian Cole has the puck on his backhand under duress from a Capitals forward. Phil Kessel is making a beeline to the boards to help Cole out, Cole recognizes this, but his pass is just too soft and too far away for Kessel to get this puck.

The double-edge sword inherent in all of this is that the Penguins actually generate a ton of offense from making plays like these. When executed correctly and safely, these plays often send the Penguins off to the races. In instances like this one, Cole makes a play that directly results in a shot attempt that is thankfully gobbled up by the goaltender.

Here’s another example that’s essentially the reverse of what we saw above. In this instance, Olli Maatta has help at the top of the zone, but he opts to short a breakout pass for Malkin, who clearly isn’t expecting this puck.

Maatta makes this play, like Cole did above, with his head down. He’s not aware of whats happening in front of him, and he doesn’t see his teammates streaking back into the defensive zone with numbers.

Through the first seven games of the playoffs, the Penguins have found themselves in situations where they have more time, space, and puck-support available to them than they actually perceive they do. This doesn’t just put pressure on the team defensively, it robs them of future offensive opportunities by putting the brakes on any potential breakout chances. Regardless of their success so far, this remains an area of focus for the Penguins as far as areas of improvement are concerned.

A lesson in how to create offense via convergence.

Remember how annoying it was to watch the Montreal Canadiens collapse on Jaroslav Halak and them seem to score on every odd man break they had in the 2010 series?

Doesn’t that kind of remind you of what’s happening right now?

Lots of people pointed out that, specific to game two, the Penguins lost heavily in the shot department but saw a fairly even split in high-danger scoring chances. I think there’s some explanation to be had for this from a systematic standpoint.

The Penguins are really loading up the box in front of the net and taking away the Capitals chances from the high-danger areas of the ice. Before the series started, I noted that the Capitals and the Penguins played similar structures defensively speaking, with the main difference being the Capitals willingness to branch out to the points whereas the Penguins typically don’t pressure those shots in a major way.

Take a look at the Penguins defensive posture in the above video clip. They’re really flooding the bottom half of the ice in their overload structure. The Capitals defense never seems to pinch too far into the zone, but their forwards are committed to playing deep into the zone and behind the net. As a result, you end up with a huge gap between the defensemen at the top of the zone and the forwards down low. I believe this gap is where the Penguins are generating their odd man breaks.

This is certainly a dangerous way to make a living. The Penguins are allowing a ton from the outside, attempting to insulate Fleury, and are banking on odd-man rushes to create goals. So far, given their history of being on the other side of these performances, it’s nice to finally see the breaks go their way for once.