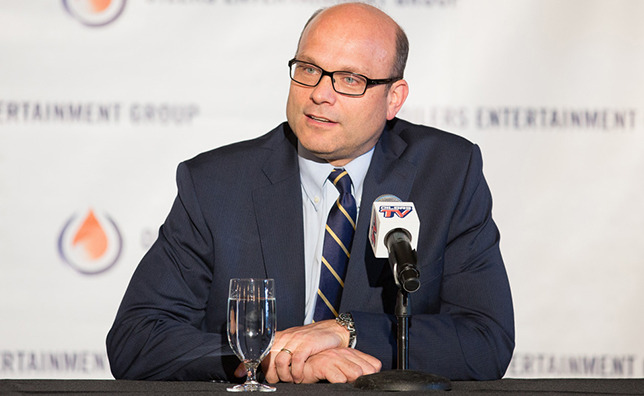 On Monday afternoon, Edmonton Oilers President of Hockey Operations and GM Peter Chiarelli spoke to Oilers’ insider Bob Stauffer on 630 CHED’s Oilers Now program. It was a surprise hit on the show a day after Chiarelli made himself available to Edmonton media following the demotions of Kailer Yamamoto and Jesse Puljujarvi.

Chiarelli didn’t say much in the interview (listen here) outside of the normal things. He touched on the parity of the league and how it’s never been more wide open, how it’s a long season and still pretty early, and how he thinks there are a lot of good things to take from the start despite Edmonton’s four game losing streak.

The juiciest tidbits? When Chiarelli talked about his defense. One of the quotes is a good one for Oiler fans, while the other is quite frankly disturbing and says a lot about the job the GM has done to this point.

The quote that really got my attention from this interview was when Chiarelli talked about the Edmonton defense. He told Stauffer that “None of our d men are exceptional passers” and I had to listen to that quote a few times before it really sank in.

Chiarelli is admitting that his team STILL does not have a puck moving defender that can push the pace and, in a way, that his team still doesn’t doesn’t have that top-pairing defender he has coveted since arriving.

That’s a pretty damning statement when you consider the price Pete has had to pay since taking over in the spring of 2015. I’m sure most of you will roll your eyes because “it’s in the past!” and “literally doesn’t even matter”. That said, what I’m about to write does matter and it is EXACTLY why the Oilers are where they are right now.

The club poured assets into fixing the defense. They traded 2017-18 Hart Trophy winner Taylor Hall, the 16th and 33rd overall picks in the 2015 NHL draft, invested a four year, $16 million contract in Kris Russell and money into guys like Eric Gryba, Jason Garrison and Matt Benning.

They paid a very high premium to ice a defense that the GM still believes is not good enough and that can’t push the pace with the best player in the world running the forward group. The fact Chiarelli basically admitted that his defensive group still isn’t good enough after all the damage he did is maddening.

If you ran a business, would you let someone who flushed away countless valuable assets to fix a problem try again to fix that very same problem? I sure as hell wouldn’t. What’s that old saying, the definition of insanity is trying the same thing over and over again and failing?

It’s not even that the Oilers traded the picks or that they traded Hall away. That is what it is, and honestly I can live with that. It is the business of hockey and sometimes you have to move good players or high draft picks to get something you need. The problem I have is Peter Chiarelli never got what he needed in either of those deals. (Disclaimer, I like Adam Larsson quite a bit and think he’s a top-four D that can play in this league)

The Oilers have two bonafide top-four defenders on their roster and a young player in Darnell Nurse who is very likely to be in that spot by the end of the season. After that? Russell is way over his head and drowning on the second pairing, while Matt Benning and Jason Garrison don’t look like NHL’ers most nights.

We can bitch and moan about the coach all we want, but this roster isn’t good enough. Chiarelli admitting that his defense still can’t move the puck and still isn’t good enough should make Oilers fans mad and should have Daryl Katz breaking chairs in his office.

The borderline funny part? Even after admitting he’s done a bad job building his defense with the assets he poured into it, Chiarelli is still getting a relatively free pass.

Andrej Sekera isn’t exactly close to a return to game action, but Chiarelli did mention that he has begun skating. Sekera has been a huge loss for the club since the 2017 Stanley Cup Playoffs, and I can’t help but think he would fill a lot of holes on this current roster.

I can’t see a way he returns anywhere near 100% this season, but just getting him back on the ice is a welcomed sign. I would imagine the target for getting him into games is sometime in February, although it may be far too late at that point should the club not figure out it’s alarming situations on defense and the wing.