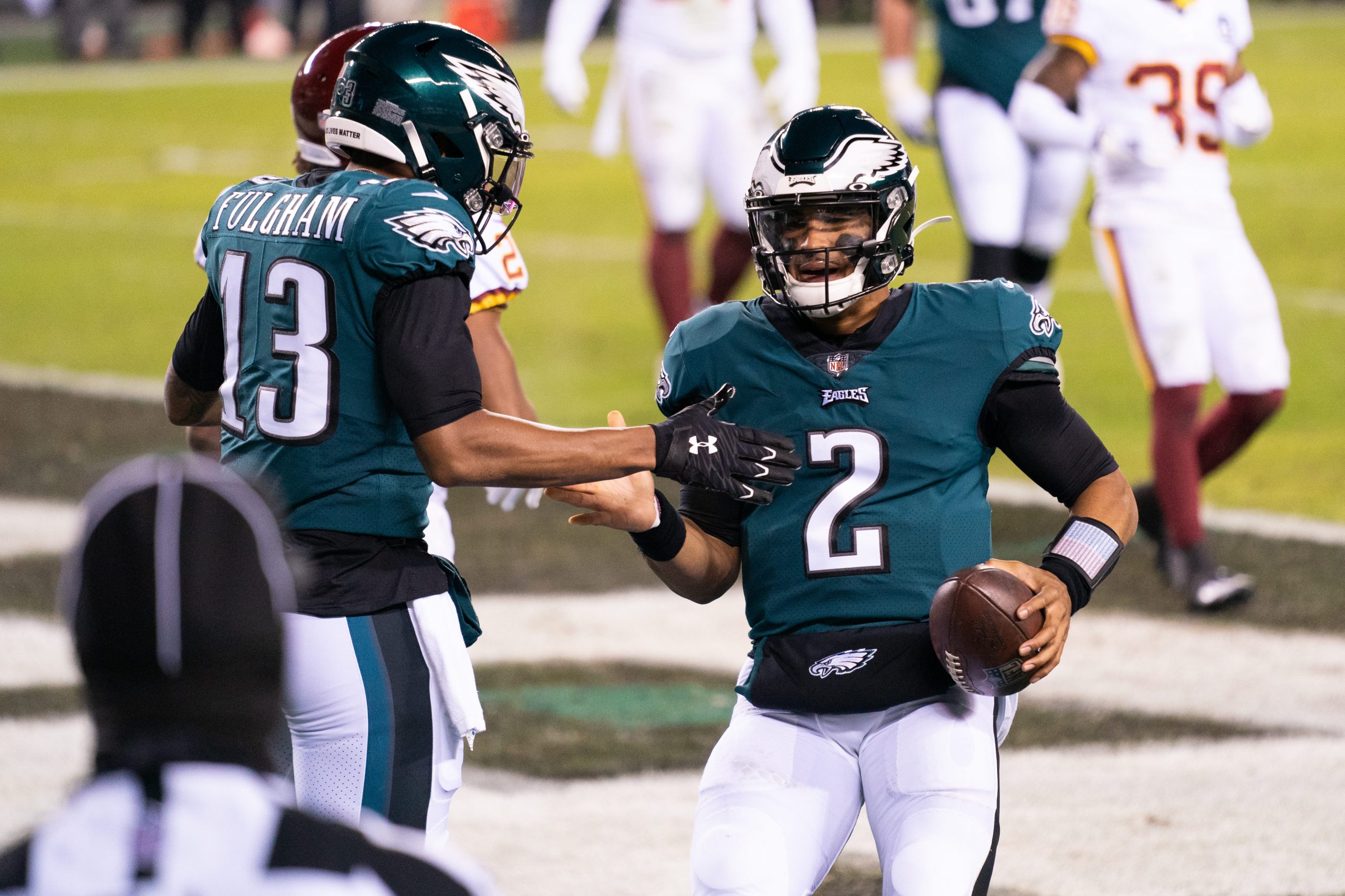 The Jacksonville Jaguars will travel to Philadelphia to take on the high-powered Eagles. While Trevor Lawrence looks as if he is starting to find his footing, Eagles quarterback, Jalen Hurts, is making a strong MVP case. The Eagles’ defense also has been impressive. However, the Jaguars are already one win away from having matched their win total from last season.

A Jalen Hurts vs Trevor Lawrence quarterback duel was most likely not at the top of fans’ list coming into the season. However, both of these quarterbacks have impressed thus far. Many are already saying the Eagles are a Super Bowl threat, they are one of the two remaining undefeated teams after all. Meanwhile, the Jaguars are on a two-game winning streak after victories over the Colts and the Chargers. All in all, this Eagles vs Jaguars matchup is shaping up to be a more entertaining one than originally anticipated.

Jalen Hurts is making a strong MVP case early on this year. While Lamar Jackson would most likely win the award if the season were to end today, Hurts would be a close runner-up, and for good reason. So far, Hurts has thrown for 916 yards to go along with four touchdowns and only one interception. However, Hurts has not been the only bright spot for the Eagles.

A.J. Brown has quickly become Hurts’ favorite target and is already paying dividends with 20 catches for 309 yards this season. As a result, the Eagles are no longer one-dimensional on offense. Not to mention, Miles Sanders has been a reliable running back. What is going overlooked is how dominant their defense has been. Their secondary has a legitimate case for being the best in the league, which is spearheaded by the elite corner, Darius Slay.

Exactly how good have the Eagles’ corners been? They have two corners in the top four when it comes to the lowest passer rating allowed so far this year. The previously mentioned Darius Slay sits at the third spot with a rating of 29.3 followed by James Bradberry with a rating of 30.5. The Eagles seem to have the complete package so far and it should terrify the rest of the league.

Are The Jaguars A Sleeper This Year?

Not many expected the Jaguars to be 2-1 at this point. While Justin Herbert was playing hurt, the fact remains that Jacksonville still blew out a talented Los Angeles team. Not to mention, shutting out any team in the NFL is a tall order and they accomplished this against the division rival, Indianapolis Colts. Could Jacksonville actually be a sleeper this year?

There are still a lot of games to be played. As a result, this could just be a fluke. The consensus is still that the Jaguars will be battling for last place in their division again. However, much of this young talent the Jaguars have accumulated with high draft picks may finally be paying off. Changing up the coaching has also helped significantly.

Despite a questionable contract, Christian Kirk has had a solid season with 18 receptions for 267 yards and three touchdowns. Trevor Lawrence is looking better in his sophomore season as he currently possesses numbers of six touchdowns to one pick and 772 passing yards. The Jaguars still have a long way to go, but things are looking up for them as they enter this Eagles vs Jaguars matchup.

Predictions For Eagles Vs Jaguars

Ironically, this could be a good game. We are still going to go with the Eagles to come away with the win, but the Jaguars should still put up a fight. With the Eagles having the home-field advantage and riding a ton of positive momentum, they should win a close one. Jalen Hurts is on a mission this season and the Eagles’ defense could get the better of Lawrence late in the game. Do not be surprised to see this game won on a last-second touchdown or field goal in this Eagles vs Jaguars matchup.