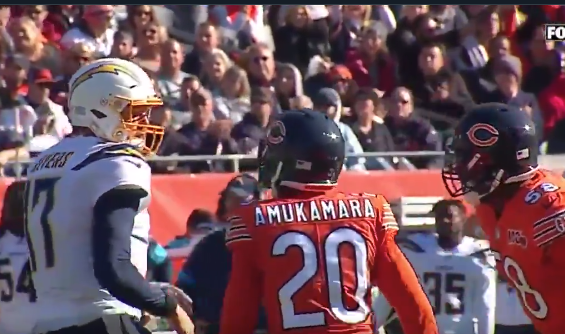 The Bears’ vaunted defense was a thorn in Philip Rivers’ side throughout Sunday’s game, and they appeared to have had an effect on his temperament.

Rivers is known to get into it with his opponents, as his trash talking game is strong. However, it sometimes backfires on him, as the Chargers haven’t exactly been a dominant force in the league over the past few years.

He got into it with two Bears defenders at the end of a play during Sunday’s game, when Chicago was celebrating a big play on defense. They went to jump around in celebration, and Rivers bumped into one of them, leading to a bit of a brief skirmish on the field.

The Bears were enjoying a lead at the time, and Rivers clearly was not happy about it.