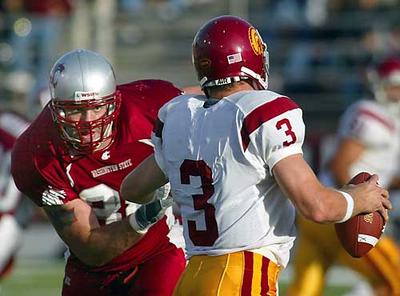 First of all, how about that 2002 USC @ WSU rebroadcast last night? Boy that WSU team was GOOD! Same with USC and Heisman QB Palmer, a young frosh WR named Mike Williams, just talent everywhere. How we put up over 500 yards of total offense is just amazing for that game. Captain Caveman had a hell of a game, especially in OT. There were moments where with his size and quickness he was virtually unblockable. What a player!

Also, boy, watching tape of Jason Gesser, it’s UNBELIEVABLE how bad his arm really was! So many bad, floaty passes. My memory is really fading, because I don’t ever remember his arm being that bad. When you look at tape of Alex Brink, there is now NO QUESTION that Brink has the better arm! I talked to Michael last night and we were both just laughing at how bad Gesser’s arm really was.

Then again, Gesser gave us this moment: 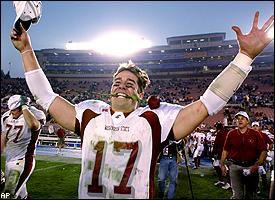 All-time leading passer in WSU history. So, maybe it’s not JUST about arm strength after all?

Speaking of Brink, GREAT read on him in today’s Oregonian. Click on the link, and under the first part, where it says College Football, click on “WSU’s Brink earns respect”:

Note – I didn’t put in the entire link because the line is too long, screwing up the whole blog. Be sure to check it out, though, it’s a very good read!

Lawson, glad you like the new look. It’s certainly better than it looked before. I linked up Cougfan, Cougzone and the Spokesman Coug Blog on the right, but if you have other things that should be linked, let me know. I may add the P-I, Times and News Tribune WSU sections to the links.

Here’s your one-stop look at all 3 of our picks for this week:

Rooster, I think you are selling the Cougs attendance short – right now there are 44,000 seats reported sold (as of Thursday night, really) and they should see some more walk-up. I still don’t have tickets but I plan on walking up tomorrow afternoon with Conor, so that’s two more tight there! Might we approach 50,000? OR, how about this – might we TOP UW IN THEIR OWN TOWN!?!? Fingers crossed…..

Other notes – Bumpus has a sore ankle, actually hurt it vs. Nevada on his first punt return, but he should be ok. Gametime decision, but with Grambling, plus a bye week looming next week, don’t be shocked if he doesn’t go. Bursey would fill in returning punts. Also, Husain Abdullah is returning to the starting lineup, so he’s healthy. Derting has been battling the flu, even getting an IV, but they think he’ll be fine. Even Cody Boyd will suit up and will probably see action, so things sound OK health-wise.

There will be 50 high school players at the game on Saturday, but in a weird rule, the Coug coaches can’t speak to them! Why? Well, it’s not actually considered a “home” game for the Cougs. If you play a game over 75 miles from your campus, the game is considered an away game per the NCAA. That way it prevents the Cougs to move a game to, say, Texas Stadium in Dallas and just hold an open house for every recruit in the state to come down and mix-n-mingle with the coaching staff.

JC All-American running back JT Diederichs, a former Coug signee from 2003, has set an official visit to WSU in early December. JT has had the Cougs on his radar ever since he failed to qualify, and has a great chance to walk in and play next year given Harrison will be done, so the need will be there at RB (yes, I like DeMaundry just like you do, but you still need a couple of guys that can get it done back there). Keauntea Bankhead, friend of JT and a UW signee (and defensive player of the year his senior year at Ballard) who last year announced he would go to UW, now says “all options are open” even though he says he wants to go to WSU. Stay tuned there, he’s eligible for 2007 if he gets his AA degree.