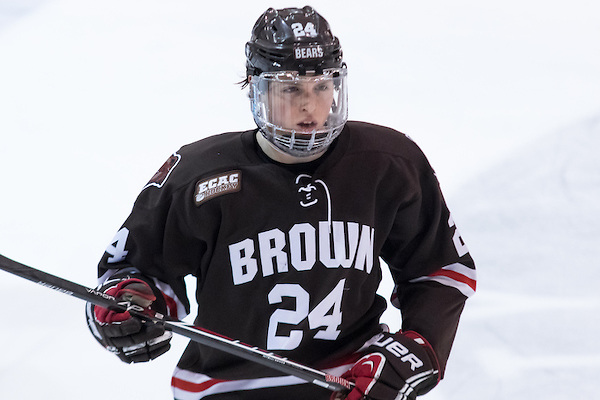 On Marc 7th, 2018, the Pittsburgh Penguins announced that they signed forward and 2014 4th round draft pick Sam Lafferty to a two-year entry-level contract (ELC). It will begin next year, and for now, he will join the Wilkes-Barre/Scranton Penguins on an amateur tryout contract (ATO).

Brown University is, and has been, absolutely terrible. Terrible might not even describe it. They’re just…sooooooooooooooo bad.

During Lafferty’s time there, Brown’s records have been as follows:

His freshman and sophomore years were years of learning how to adjust to college hockey for Lafferty (even though he finished top 5 and top 8 in team scoring in those years, respectively) but during his junior and senior years, he did about all he could for Brown.

His junior year was a career year, as he had 13 goals and 22 assists (led the team) for 35 points (led the team) in 31 games. Even with the Brown Bears’ pathetic season performance that landed them last in the conference, Lafferty was the bright spot with his outstanding play. Whil

e not necessarily matching it, Lafferty’s senior year wasn’t anything to balk at either considering that still landed him as the team’s leading point scorer.

Lafferty was plagued with a terrible team around him that continually put out miserable performances and quite frankly, I can’t imagine how elated Lafferty must be (about the hockey aspect of things, at the very least) to go to Wilkes-Barre/Scranton. He’s got some great talent to play with there.

Lafferty is a very strong skater and has an extremely admirable hockey IQ, aiding him in finding plays to be made that other players may not see. He’s very generous with the puck and isn’t afraid to pass it if he sees a better opportunity than the potential one he currently finds himself in, even with very little time to make a decision. Isn’t afraid to throw a hit either with the size he has, but that isn’t a priority in his game.