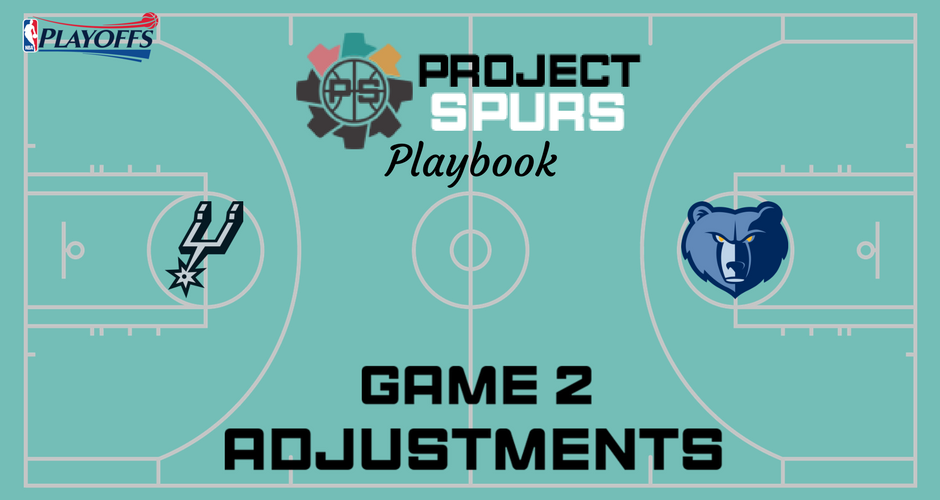 With three minutes remaining in the game Saturday, Jonathon Simmons drove down the lane and finished a layup with his left hand over Jarell Martin to give the San Antonio Spurs a 36-point lead over the Memphis Grizzlies.

Shades of Manu Ginobili aside, that layup gave the silver and black their largest lead of the night.

San Antonio ended up winning by only 29 points to take a 1-0 series lead. The question is, how much can you honestly improve after throttling the Memphis Grizzlies in Game 1?

The younger Gasol went 11-for-18 from the field, with only two of his misses coming around the rim. San Antonio’s bigs, specifically Dewayne Dedmon, fared poorly against the Spaniard early on.

LaMarcus Aldridge did his best to silence the narrative of his below average defense by maintaining physicality as Gasol worked out of the pinch post. Gasol finished 4-for-9 with Aldridge as his primary defender, while scorching everyone else.

In 16 games since March 1st, Gasol saw his production decline drastically. He averaged just 15.6 points while shooting 42 percent from the field, as the Grizzlies ended the season by losing 14 of their last 21. Keeping Gasol under control, as San Antonio did in the second half, is the easiest way for the Spurs to punch a ticket into the conference semifinals.

With the injury to Tony Allen, the Grizzlies trotted out a starting lineup of Mike Conley, Wayne Selden, Vince Carter, JaMychal Green and Gasol. Here were their stats in 17 minutes on the floor together during the regular season:

Saturday evening, those five logged another 10 minutes together and put up these numbers:

Every game won’t begin with Conley and Gasol being engulfed in flames, but as the playoffs progress, it will get increasingly difficult for the Spurs to flip on their death machine switch and execute teams into oblivion.

Defensively, the Spurs used everyone from Tony Parker and Danny Green to ‘The Coyote and Michelle Beadle’s dad’ to stop Mike Conley, eventually wearing down the NBA’s highest paid point guard.

Offensively, it took Kawhi Leonard playing all 12 minutes of the first quarter to keep the Spurs within striking distance. His 11 points combined with four points from both David Lee and Tony Parker were San Antonio’s saving grace in the early going.

Lee and Parker can’t be the only players to help out Leonard when the offense stalls to the effectiveness of a clogged toilet. If #PlayoffParker can maintain the slightest bit of consistency, then anything Patty Mills or Manu Ginobili can contribute in his absence is a bonus.

Someone needs to break the trend of early game slumps, and a rejuvenated Parker is the perfect remedy.

Simmons managed to play more minutes than Ginobili in Game 1, thanks in part to the blowout and Manu getting an elbow to the face that had him looking like Rocky Balboa after fighting Clubber Lang.

Simmons was only +5 in his time on the floor and his stat lines will never be the most memorable thing to happen on any given night. But these highlights will be:

Honestly, it’s time to see what Simmons is capable of in the playoffs. His 14 minutes on Saturday are more than half of the 25 playoff minutes he logged last season, all against the Grizzlies.

His impending free agency, Ginobili’s fragility, and the overall unknown expectations tied to Simmons are all reasons why he should log more minutes. But that last part is probably why he won’t.

Like George Hill during the 2009 NBA Playoffs, Popovich won’t play someone he can’t fully trust until he has no choice. The highlight reel Simmons unleashes can single-handedly shift the momentum of any game. Saturday night was Simmons’ way of informing Popovich that he’s ready.