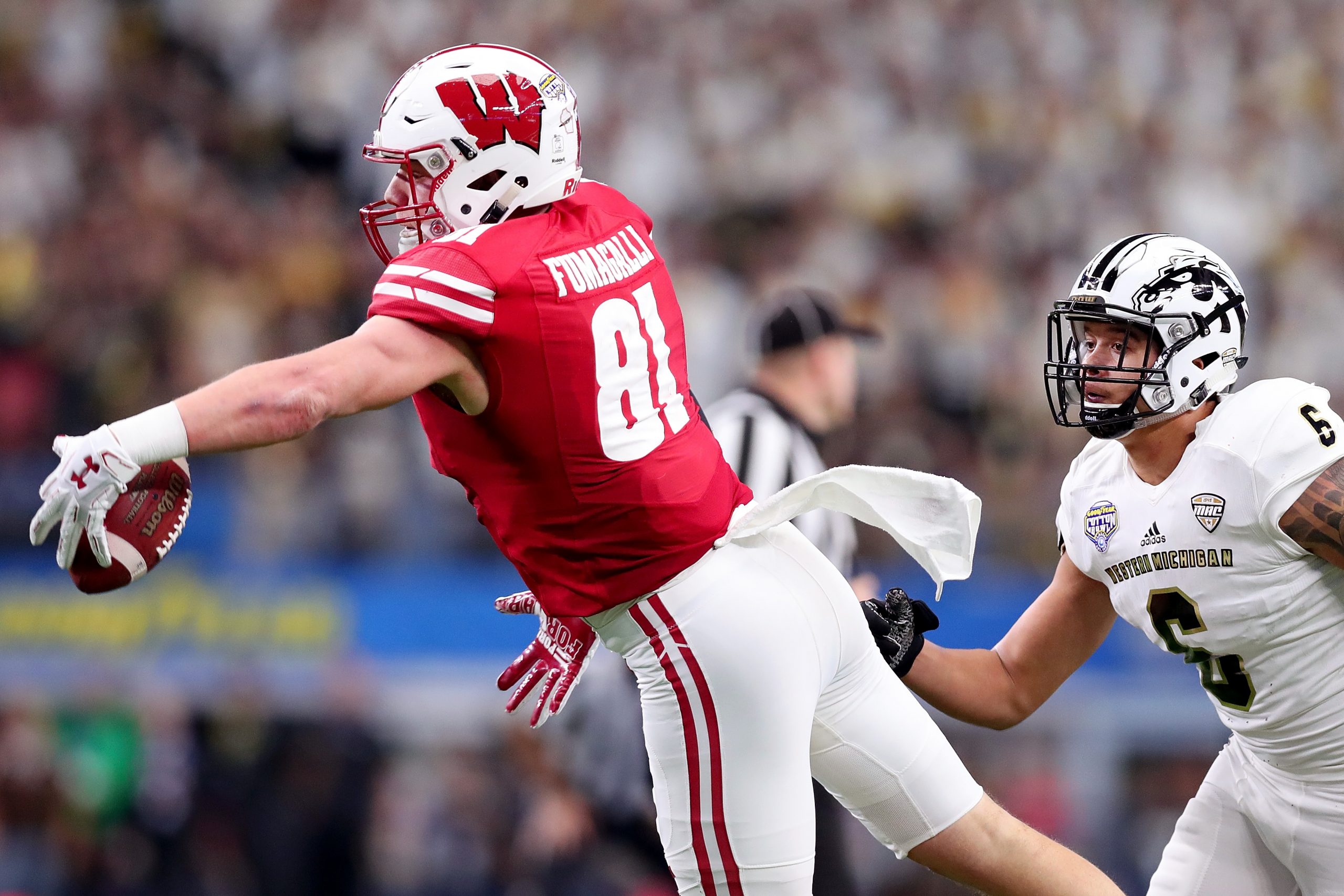 There have been few coaching eras at the University of Wisconsin that have started as good as Paul Chryst’s has. Wisconsin finished this season with 11 wins and took the only win of any Big Ten team in four different New Year’s Six opportunities.

It means some big time expectations have been set for the future of this program. But, the time to look backwards is over and it is time to look at how this team may stack up when it opens the 2017 season against Utah State.

Of course there is a long way between today and Labor Day weekend, but it is never too early to take a peak at how this team sets up. So, let’s start by taking a look at how Wisconsin’s offense is going to set up for Chryst’s third season at the helm of the Badgers program.

There is only one word to describe this group — potential. Alex Hornibrook got his feet wet has a starter for the majority of his redshirt freshman season. However, he also hit a little bit of a wall late in the year and the offense just didn’t have the spark it once did with him leading that group.

Unless something crazy happens, it appears that this offseason will all be about making sure Hornibrook gets an opportunity to continue to showcase his live arm.

The only way Hornibrook isn’t the starter heading in to the season are injury (god forbid) or a still impending transfer of former Notre Dame quarterback Malik Zaire. He was supposed to have made a choice already, but has pushed that timeline back and that likely means he isn’t coming to Wisconsin.

We’ll also be keeping an eye on the potential of both Kare Lyles and incoming early-entrant Jack Coan. The latter comes in as one of the highest-rated quarterbacks to ever come to UW out of high school. Let’s see what he has when he steps up to the next level. UW fans will also get their first real look at Lyles, who spent most of last offseason recovering from surgery and was the emergency quarterback this past season while redshirting.

This group has the potential to be very successful this season, but a lot of the success is going to hinge on the work put in this offseason.

This group got back on track in a big way in 2016, and a lot of that had to do with redshirt freshman Bradrick Shaw establishing himself as a viable option outside of Corey Clement.

What will be interesting to watch this offseason will be the battle between Shaw and James for the starting spot. Early indications are the Shaw seems perfect for the early down spot, while James is setting himself up to be the third-down option. Either way, expect both to see the field plenty.

The wildcard here seems to Taiwan Deal, but we’re likely to not know exactly where he will fit in until this fall thanks to offseason ankle surgery. Wisconsin hopes he can overcome a brutal injury history in his first two years in the program, because we’ve all seen the potential in this guy when healthy.

Deal has put up 667 yards and six touchdowns in 17 career games, but has seen his time diminish with the emergence of Shaw. If healthy, there’s little doubt he puts himself in the mix for a serious amount of carries, but he has to prove he can be a consistent contributor and that’ll be tough after missing spring ball.

What was a major concern entering 2016 became a major strength for the Badgers by the end of the year. UW’s run game was found and in large part that happened with an offensive line that stopped being in flux. Once a starting group of Ramczyk, Dietzen, Dieter, Benzschawel and Edwards was established, UW’s run game took off in a major way. As in averaging over 200 yards a game on the ground by the season’s end.

No doubt things were better in 2016, but this is a group that has its best days ahead of them. The 2017 group will be deeper and more talented even if expected first-round draft pick Ryan Ramczyk leaves. That’s what happens when you have players like David Moorman and Cole Van Lanen in the mix.

It is also what happens when you will have four returning starters with at least a year or two of experience under their belt. Wisconsin went from near the bottom of the B1G early in the season to averaging over 200 yards a game on the ground (39th in the country). Expect to see names like David Edwards, Jon Dietzen and Michael Dieter up for preseason Big Ten all-conference honors.

The biggest challenge for this group will be figuring out how the heck to pass block consistently. Far too often Hornibrook and Co. were seen on their respective backsides in crucial situations. Wisconsin gave up 24 sacks, which was fifth in the Big Ten and tied for 44th nationally. It would be nice to know Hornibrook is in good hands to help unleash his powerful arm and pin-point accuracy next season.

He was beat up bad by the season’s end and that can’t happen in 2017 if the Badgers are going to have success. It is partly on him, but also partly on the offensive line to get things cleaned up as well. If that is the biggest thing UW’s offensive line has to work on, things are looking back up to snuff for the signature group of Wisconsin’s roster.

While the passing game wasn’t Wisconsin’s strong suit in 2016, it did a great amount of work towards building in to a group that can be trusted in 2017. Jazz Peavy broke out as the go-to wide receiver and a dangerous overall weapon for Wisconsin’s offense.

The senior-to-be put up some quietly impressive numbers — 43 receptions, 635 yards, five touchdowns — in the passing game. He also added another 318 yards and a touchdown on the ground thanks to his ability to make the most out of the jet sweep.

But, the real reason to be excited about 2017 at this position group came from the play of a pair of true freshmen in 2016. Quintez Cephus flashed some real potential as a deep threat, catching four passes for 94 yards on the season and began to get more playing time as the season went on. Additionally, A.J. Taylor began to be a bit of a clone of Peavy at times.

Taylor had just three catches, but went for 53 yards and added some much needed speed to this group. Look for that experience and the work from this offseason to make both key parts to the puzzle with Rob Wheelwright out of the picture next season.

One of the names to really watch this upcoming season is redshirt freshman Kendric Pryor. He may not be the tallest option out there (just 5-11), but has the skill set to be a good slot option for Wisconsin in three-receiver sets.

Don’t be surprised to see this group burst on to the scene as a dangerous overall group with varied skill sets if the potential we saw in 2016 can be met.

One has to wonder where the Badgers passing game would have been in 2016 without Troy Fumagalli. I mean, how often does a tight end lead a team in receptions? That’s what Fumagalli did, catching 47 passes on the season for 580 yards and two touchdowns.

He became UW’s best weapon on third downs and was a matchup nightmare for plenty of teams. Underrated as a run-blocker, he is rounding in to form as an all-around tight end. His experience as just a sophomore this season should make him a huge target for opposing defenses next season.

The good news is Fumagalli isn’t the only option. Kyle Penninston showcased a good pass-catching ability as well in his first season, pulling in six passes for 102 yards and a pair of touchdowns. If he can pair with Fumagalli in the red zone it should be real interesting for opposing defenses in 2017.

One also has to like the potential that Jake Hescock possesses, especially as a blocking-first option early on in his career. He redshirted this season, but we can see a lot of Austin Traylor in him early in his career and that should get him on the field.

Wisconsin didn’t have a real blocking-orientated tight end this past season and that’s a useful tool. Look for all three of those names to see plenty of the field for UW in the fall.