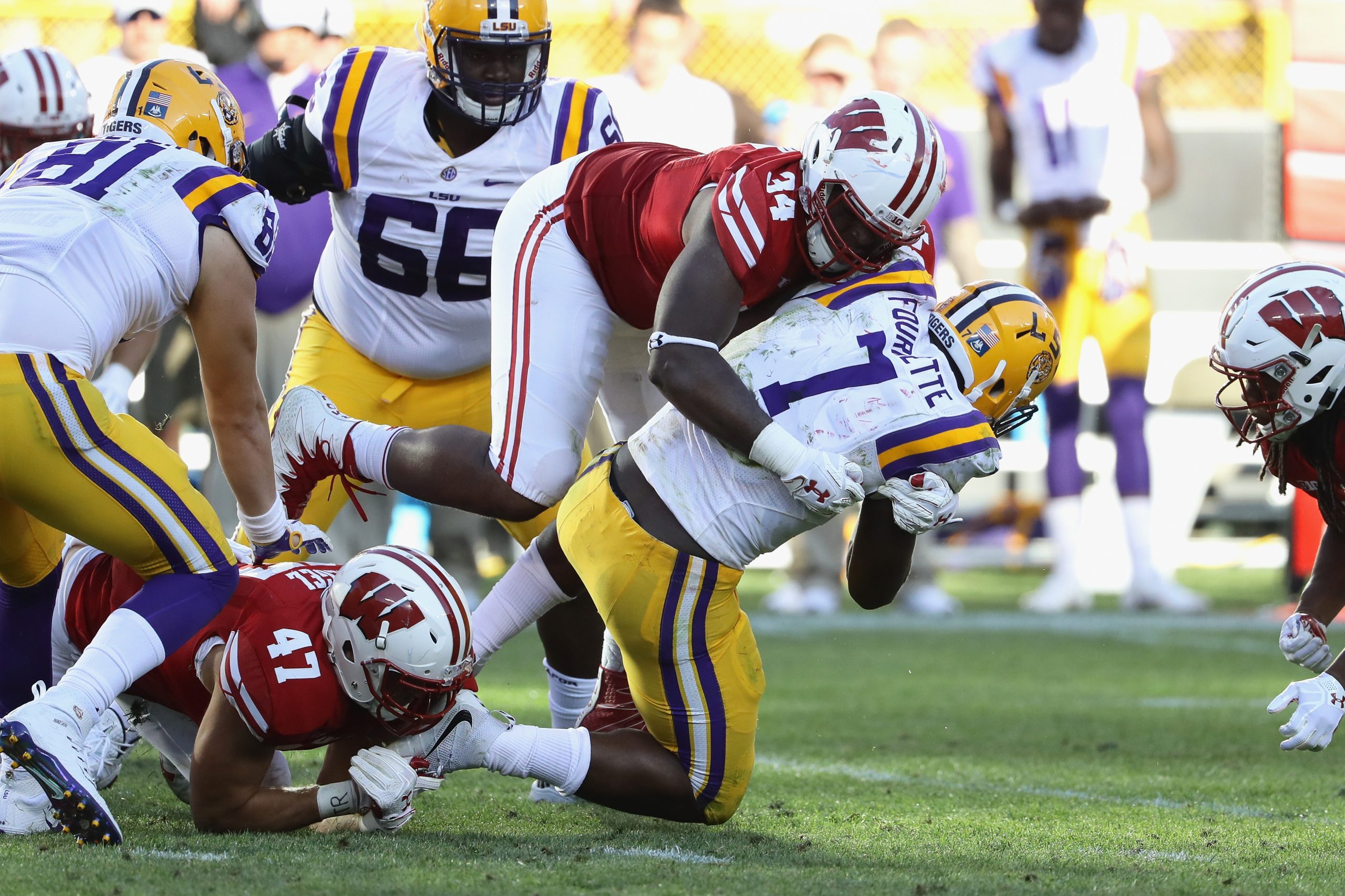 The first two seasons of the Paul Chryst era have set the bar rather high in Madison. A large part of the Wisconsin Badgers’ ability to get to 10-plus wins each of those two years has been its defense.

Last season, a transition occurred as three-year defensive coordinator Dave Aranda left for LSU and in came Justin Wilcox. That move may have been a godsend, as Wisconsin’s secondary was transformed and stability was achieved elsewhere. All of that despite three starters having to be replaced in the secondary alone.

The 2017 season will give Wilcox and the players some different challenges, but if 2016 was any indication it appears that this group has plenty of talent to step in and get things done at the high level expected these days in Madison.

Just who will need to step up and how will this group look? After looking at the offense earlier this week, it is time to look at the defensive depth chart.

There is no more unsung group on the Wisconsin Badgers roster than the defensive line. Such is the life of a group that is meant to eat up space, control the line of scrimmage and allow others to make the big plays.

Heading in to 2017, this group may be the deepest and most talented it has been since the switch to the 3-4 look back in 2012. There are the four-year stalwarts like Chikwe Obasih and Alec James, there is a junior space-eater in the middle named Olive Sagapolu and there is some special potential in underclassmen like Garrett Rand, Kraig Howe and Isiah Loudermilk.

With Justin Wilcox likely to return (not buying the Cal head coach rumors), this group gives him the flexibility to do so much in the way of how he aligns the defense going forward. There may be no group more versatile than the line, so look for this group to continue to produce in the roles they need to.

Such is the case with three seniors with plenty of experience and a youthful group full of potential. If there could be one player that transforms any position in 2017, look at Isiah Loudermilk to be that guy. He is a freak of an athlete and could be a massive help in edge rushing if used right early in his career.

Potential outside and production inside appears to be the name of the game for a group in for its biggest transition since the switch to the 3-4 defense back in 2012. Gone are star outside linebackers T.J. Watt and Vince Biegel, which means a lot of production and star power is gone in one offseason.

Those two were more than just productive, and in the case of Biegel, were arguably more important than the stats put up. Biegel was clearly a leader in the locker room and the heart and soul of the defense out on the field. Replacing that won’t be easy. Neither will replacing the production of Biegel, who ended his career with 191 tackles, 39.5 tackles for loss and 21.5 sacks.

However, the Badgers have loaded up on talent across the board at this position and it is likely just a case of figuring out exactly who that “next man up” is from a group of really talented players. Wisconsin will likely turn to the steady hand of Garrett Dooley at one of the two outside linebacker positions, but look for more of a pass-rushing edge on the other side of the defense. Therein lies the most interesting competition.

One name that may surprise you to see on the two-man depth chart was that of Andrew Van Ginkel, a JUCO recruit. However, Van Ginkel isn’t your average JUCO recruit. He went that route after a freshman season at South Dakota that had him up for national FCS Defensive Player of the Year and was looking to move up the college football ladder. All that I’ve seen of him showcases a high-motor player that lives in opposing backfields. If the potential can be met, this is a home-run recruit from the Badgers.

If not him, look for names like Zack Baun, Griffin Grady, Noah Burks and Christian Bell to get a chance. In fact, I’d argue former Alabama linebacker and teammate of Bradrick Shaw, Christian Bell, to have a massive impact on this group from what we’ve heard around the team.

All the attention may be on the two starting spots inside, but the biggest battle may be for playing time at inside linebacker. That’s what happens when you have injuries to big names and the players that replaced them stepping up. Wisconsin will get back both Jack Cichy (who could even move outside should Wilcox want his athleticism back out there) and Chris Orr back from season-ending injuries. They’ll also return stalwart T.J. Edwards. There’s also Ryan Connelly, who stepped in and more than held his own as a third-team player turned starter for most of this past season.

Spring and fall camps are going to be fun to watch, if for no other reason than there won’t be a more competitive group to watch than the linebackers. All of that talent, so few spots to be had. Wisconsin is blessed at this position unlike anywhere else on the roster.

It is going to be strange to not see Sojourn Shelton on the outside of Wisconsin’s secondary. Such is the case when you have a rare four-year starter at cornerback. However, this group appears to be in fine hands without him.

That is what happens when you see productivity out of those around a player like Shelton. Natrell Jamerson was a huge help as the third cornerback in the group, a group that led the Big Ten with 22 interceptions in 2016.

He’ll form a solid starting duo with Derrick Tindal, at least that is the expectation on paper. There is a lot of competition on the edge though, especially from Titus Booker and Hawai’i transfer Nick Nelson. In fact, don’t be surprised to see both of them give Jamerson a huge run for his money for the starting job.

Either way, depth shouldn’t be a worry at cornerback.

Safety will also see one starter depart, as Leo Musso leaves the Badgers program after seemingly being there forever. Yet, much like the case at cornerback, there isn’t much crying over his departure thanks to the depth and potential at the position. Arrington Farrar has long been tapped as the potential breakout star of this group, but so far he has been a star on special teams and a steady hand in the back of UW’s defense as well.

He’ll get every chance to shine next to returning thumper D’Cota Dixon at strong safety. Dixon proved to be an asset in both run and pass defense this past season, racking up 60 tackles, 2.5 tackles for loss, one sack, four interceptions and a fumble recovery. No play set the tone for the 2016 season more than Dixon’s game-clinching interception against LSU at Lambeau Field.

Wisconsin doesn’t just have two really good players at safety either, as Farrar is going to have a challenge for the starting role next to Dixon from Patrick Johnson II, who looked so good as a freshman that he saw the field plenty. There’s also the forgotten Joe Ferguson, who’s athletic ability may be the deciding factor should Farrar falter in the slightest.

Look for the openings at corner and free safety to be a lot of fun to see play out on this team.