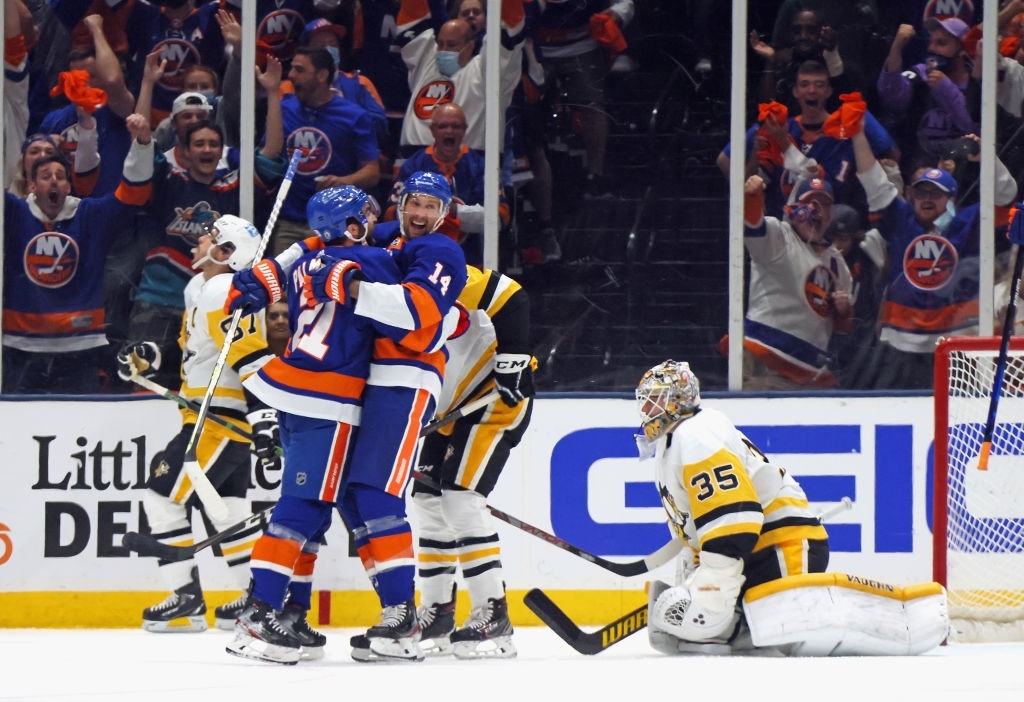 Wednesday night the Penguins were eliminated from the Stanley Cup playoffs by the New York Islanders in six games.

It’s now been four postseasons since the Penguins have even won so much as a series. They’ve had incredibly poor shooting luck in the postseason over that time and their goaltenders haven’t been able to keep the puck out of the net.

The Penguins undoubtedly deserved to win this series, but were ultimately sunk by their biggest question mark coming into the postseason: Tristan Jarry.

This series started as a stingy back-and-forth between two evenly-matched teams feeding off the home crowd. But it will be defined by the final two games, which the Pens lost despite utterly dominating. pic.twitter.com/dgoJXLDpmK

His -7.9 goals saved above expected puts him dead last among postseason goaltenders.

For comparison’s sake, Marc-Andre Fleury has faced 13.02 expected goals against in six games this postseason and has surrendered just 10 goals. (This is not a hurrrdurrrr comment about keeping Murray).

While you could point to Sidney Crosby and Jake Guentzel largely being held off the scoresheet (despite dominating territorial play), or to a handful of other trivial things that happened this series, the reason they are not advancing is simple:

Tristan Jarry lost them the series.

Updated Jarry goals saved above expectation graphs for the totally sick and twisted among us with the -3.13 effort last night. These last 10 games have sure been something. https://t.co/rsTGCZNSN0 pic.twitter.com/kugPI9nIXx

It’s a devastating blow to see this team go down in such miserable fashion not because it’s another year without playoff success, but because this was easily the best team they’d had since winning back-to-back Cups, and they truly could have made some noise had they even gotten average goaltending.

Jake Guentzel doesn’t need to be traded, and Kris Letang has at least one more season of exceptional play in him.

While the blue line will almost certainly look a bit different next season, this forward group is as good as the Penguins have had, and quite frankly, doesn’t need to be touched.

This season figured to be their last legit chance at a Cup, but if they’re making another run it pretty much has to be next season.

Ron Hextall and co. need to do whatever they can to make it happen.

Rocking the same look once again.

More of this, please. pic.twitter.com/rymbFmA132

Big papa Jeff Carter got the scoring going with his 13th (!!) goal in a Penguins uniform in just his 20th game.

He teamed up with Kasperi Kapanen, who made a nice dish off the rush to open up space for Carter.

He’s only getting the secondary assist on the box score but Jason Zucker deserves a ton of credit for this goal as well. He intercepted a cross-ice pass in the defensive zone then immediately started to move the puck up ice.

Beauvillier responds! Anthony Beauvillier beats Crosby to the net and tallies the backhander for his third goal of the series! We're tied up at 1!#Isles pic.twitter.com/WMEPfLD9SK

It didn’t take long for the Islanders to strike back.

Less than four minutes later they beat Jarry on their first shot of the game.

Kris Letang’s pinch left Brian Dumoulin and Sidney Crosby as the only Penguins skaters back, and Anthony Beauvillier eventually toasted Crosby on his way to the front of the net.

Once Beauvillier got around Crosby, Brock Nelson fed him a pass and he went backhand high-glove on Jarry to tie the game.

We wanna take this one back to Pittsburgh, Guentzelvania.

Letang and Malkin pick up the helpers on the Guentzel power-play goal. pic.twitter.com/6X9wlD3i8c

The Penguins finally got a little bit of puck luck and regained the lead on the powerplay halfway through the period.

It took them a while, but the Penguins eventually worked the puck to the middle of the ice and found Jake Guentzel for one of his patented back-foot one-timers.

The puck hit Ryan Pulock on its way in, and and fluttered past Sorokin.

Great to see Guentzel get on the board as he’d generated a ton of chances without converting up to that point.

The dead-line ties it up at 2. What a goal by Palmieri. Incredible what happens when you get pucks on net and forwards drive to the crease.#Isles pic.twitter.com/vhz39Dv1IH

It took less than two minutes for the Islanders to strike back.

J.G. Pageau threw a weak attempt at Jarry that ended up as a juicy rebound on the doorstep for Kyle Palmieri, and he made no mistake sending it right back to the open cage.

Cody Ceci has to be better here as well. He turned the puck over moments before the goal, then failed to pick up Palmieri on his way to the net.

Kapanen had a dazzling opportunity late in the period, and even had Sorokin beat, but Travis Zajac poetically swooped in at the last second and got the puck out of danger before it could cross the goal line.

I’ll spare you the metrics, but this period might as well have been any other period from the series.

The Penguins controlled play and had more chances, but couldn’t get Jarry to come up with a save.

Mike Sullivan opted to stay with Jarry in net for the start of the second.

…And how about that shot block as well?

We love to see it, Zucker! 3-2 for the good guys. pic.twitter.com/3AqLGYsJIA

Zucker put the Penguins in the driver’s seat once again with a beautiful deflection out front.

As the Penguins worked the puck around the offensive zone, Ceci fired a low shot toward the goal, presumably looking for a tip, and Zucker did just that.

For about six minutes it felt like the Penguins could really take control of the game.

The Penguins had a bit of a breakdown in rush coverage while Brock Nelson and Josh Bailey teamed up for a pretty goal.

This is the one goal of the evening I’m willing to give Jarry a pass on.

He still seemed a bit slow to react to the cross-ice pass, but I reckon not too many goaltenders are stopping that one.

While the Penguins did have a breakdown, it’s also okay to acknowledge when the other team does something well, and I think that’s exactly what happened here.

Thirteen seconds later, Pulock’s one-timer off a faceoff beat Jarry on the short-side.

There’s nothing else to say.

If I were Sullivan, that would’ve been the end of the leash for Jarry, but he maddeningly remained in the game.

Nelson's 2nd of the game! pic.twitter.com/sbvB8utIps

Just under three minutes later, the final blow came off the stick of Nelson to give the Islanders a two-goal advantage.

Similar to his goal in game one, Nelson walked the puck to the slot and used the Penguins’ defense as a screen before sneaking the puck along the ice and between the legs of Jarry.

I get that Jarry had a bunch of traffic in front of him, but at some point he has to come up with a meaningful save to keep the Penguins in the game.

At this point, the damage had been done.

The Penguins failed to even so much as get within striking distance before time expired on their season, but it wasn’t for a lack of effort.

They spent the entire period in the offensive zone, as whenever the Islanders got the puck they just threw it down ice.

It’s been an absolute pleasure covering the Penguins and getting to know so many awesome people in the community.

To anyone that has taken the time to read/watch any of my work, I appreciate the hell out of you.

Big things on the way for next season.

All data via Natural Stat Trick, MoneyPuck, and Evolving Hockey