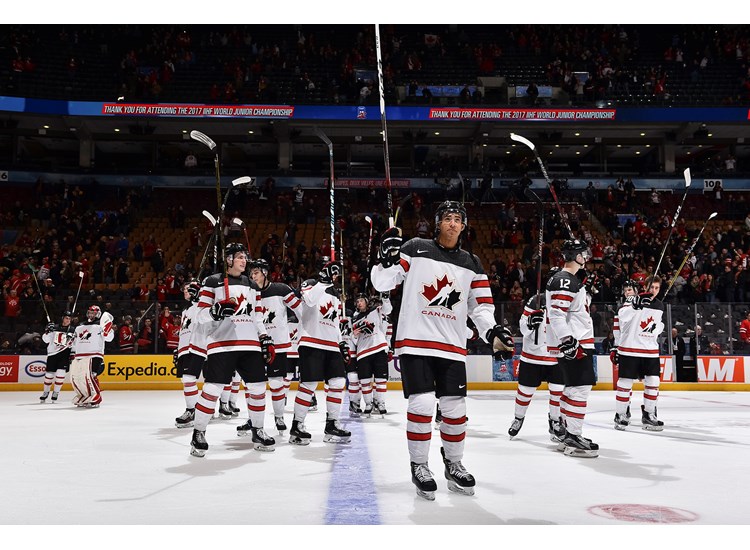 In Game one yesterday, Canada opened the 2017 World Junior Tournament with a 5-3 victory over Russia in a slower and cautious game and three power-play goals by Team Canada.

Captain Dylan Strome had two goals while Matt Barzal had a goal and two assists. The Bolt prospects didn’t get on the board and goalie Connor Ingram did not play.

In Game two today,Team Canada broke a scoreless tie after 20 minutes with the only four goals of the second on the way to a convincing 5-0 win over Slovakia.

At 5:30 of the second period Tyson Jost carried the puck in, and as the defense closed in on him he dropped it back to Jeremy Lauzon, trailing on the play. Lauzon fired a shot over the shoulder of Adam Huska.

Less than six minutes later, Canada got a nice pass from behind the net by Pierre-Luc Dubois to Lightning prospect Taylor Raddysh in front. Raddysh ripped it over Huska’s glove for his first of the tournament.

Canada extended its lead to 3-0 at 12:37 as Jeremy Lauzon’s point shot was tipped in front by Bolts prospect Anthony Cirelli for his first of the tournament.

Canada got its second power-play goal of the period as Thomas Chabot scored from a Matt Barzal pass at 16:25.

Michael McLeod added a fifth goal in the third period assisted by Cirelli.

Tampa Bay prospect goalie Connor Ingram got the win and the shutout but had only six shots on him.

Canada has the day off tomorrow before playing Latvia on Thursday.