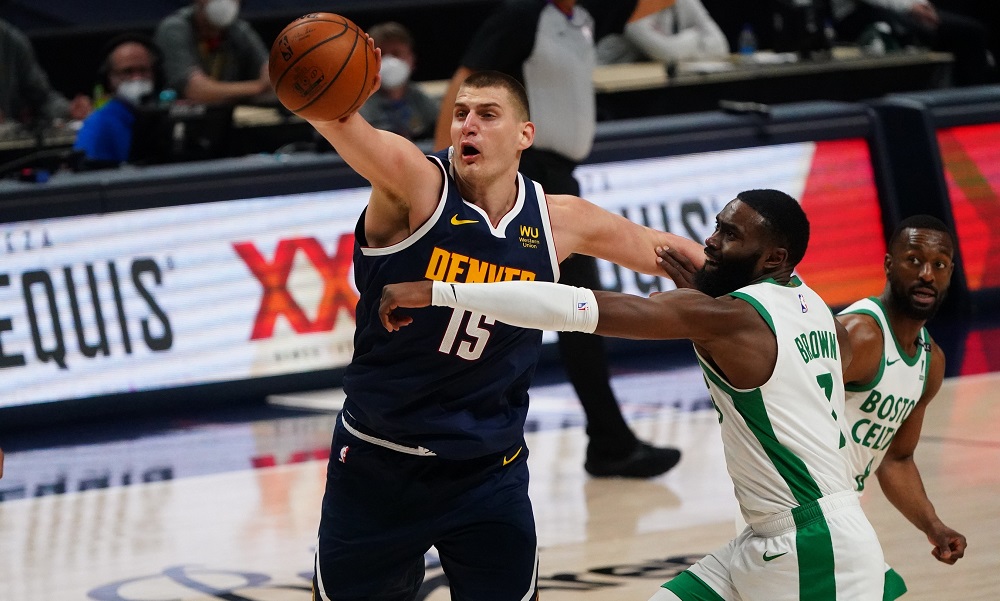 Nikola Jokic demonstrated why he might be this season’s MVP, but the Celtics overcame his triple-double with a huge comeback, breaking Denver’s eight-game win streak, 105-87. Down by 14 late in the third quarter, Boston closed the game on a 40-8 run (!), including 31-8 in the fourth.

The Celtics, ice cold from the arc all day (7 of 33), were playing catch-up from the opening tip, until finally taking an 80-79 lead with 10:32 to play. The Nuggets never led again. The Cs have now won five of the their last six.

Jayson Tatum had 28 points and 10 rebounds, and Jaylen Brown added 20 points. Off the bench, Grant Williams scored only 2 points in 20 minutes and Romeo Langford had just 5 points in 16 minutes, but they provided energy and were plus-23 and plus-18, respectively.

Jokic’s line was 17/10/11, but he shot just 6 of 15 from the field. The Cs caught a break because Denver was without second-leading scorer Jamal Murray (knee soreness).

Sometimes you get the love…

count it + a foul pic.twitter.com/qJwM3YAC6m

…and sometimes you don’t.

Jayson Tatum got a tech after a no-call on this play… | ⚡ @betonline_ag pic.twitter.com/dZDOPu4lRg

And now they feel compelled to give a T to Jokic because they gave one to Tatum.

Just let guys have their say unless it's egregious. Enough already.

Come on guys – drive to the basket! Stop going for 3 – tonight isn’t the night for that

Nice job by the Celtics making a run with Jokic on the bench. 12-3 close to the quarter fueled by getting turnovers and attacking the basket

THEY ARE DOING IT AGAIN, FOLKS

all around BIG play pic.twitter.com/ta0otmb4mJ

25-3 run for the Celtics! pic.twitter.com/k0paRtYJqH

The Celtics are on a 31-5 run going back to the third quarter.