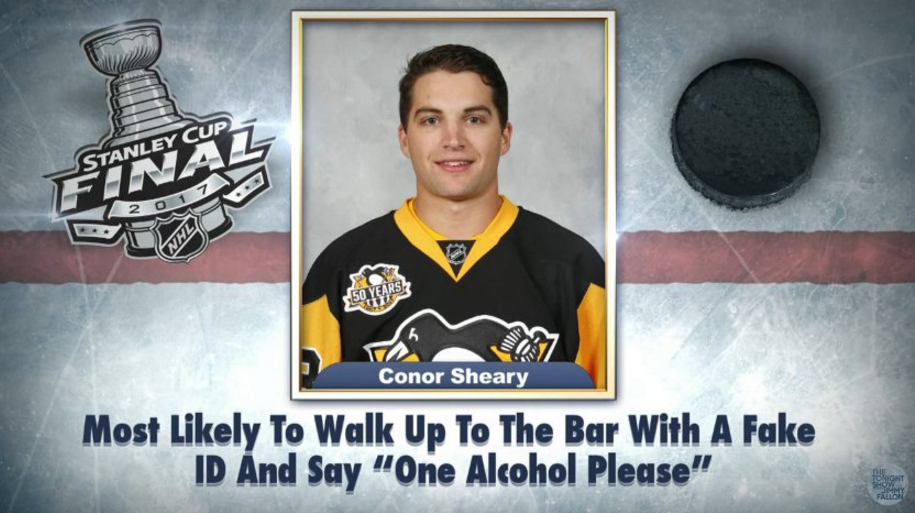 See, I don’t necessarily disagree with this (due to Geno looking pretty tired in the chosen render) as much as I’d like to make an exception to the “players only in the Stanley Cup Final” rule so I can award this to Anze Kopitar instead. But I guess it fits here. I guess.

Afetrward, Fallon began to sniff a lot and pretended to be tired. I guess he was pretending to also be the “Before” in a DayQuil commercial. COMEDY. There were no hilarious antics by Fallon after this one. I don’t even know all of the superlatives yet, and this is the best one. There’s no way you can possibly beat the accuracy bestowed upon this superlative given to Conor Sheary. Now, his current Wolverine-with-mustache facial hair set-up could have maybe helped him dodge this superlative, but the Tonight Show was slick and opted to use the available renders. Meaning they didn’t use the star of the upcoming film “Conor.” I like this one.

Afterward, more hilarious antics from Fallon involved him craning his neck a bit and pretending to hand someone what I have to assume is a fake ID. I never laughed harder in my entire life. Wow. This guy!

Next is Brad Hunt from the Predators. Is the joke on this one about his neck/chin area? Do they see something I don’t? I don’t see Hunt looking like a Pez dispenser here. I don’t understand this one. Disagree. I would have given him the “thiccest eyebrows” superlative. Look at them. They’re so bushy.

I DARE you to guess what Fallon did afterward. I dare you. If you didn’t guess “displayed his comedic prowess by lifting his head to simulate a Pez coming out of his neck like a human Pez dispenser,” SHAME ON YOU. I used a “what would their baby look like” morphing website and put together an older Macaulay Culkin as well as Draco Malfoy. It looked absolutely nothing like Hot Carl. I’m not disappointed, Fallon. That would mean I had expectations to relate to my potential disappointment.

No gaffs or laughs from Fallon after this one. He has a beard, I guess. This one lacks creativity. But it’s true enough, I guess. Ellis’ neck is probably pretty warm.

Fallon conferred with his friendo and they said “Warmest Neck” to each other a few times. You almost had me on this one, Jimmy. The superlative paired with Fiddler was really funny. I laughed. You offered someone a fake cigarette (which contradicts your superlative) and then said in a smoker voice “those were the days.”

James. My man. My guy. Did you really just…really?! GUNT-ZEL?! To quote Jackie Chiles, I am shocked. I am shocked and chagrined! Mortified and stupefied! It was outrageous, egregious, preposterous. Anyway…the superlative for your new holder of the NHL’s record for most points in a single playoff year by a rookie player (at 21 points, tied with Ville Leino and Dino Ciccarelli), as well as the 2017 Stanley Cup Playoffs’ leading goal scorer. …because he has blonde hair…? Don’t you make fun of the blonde superman like this. How could you. Disgusting.

Fallon then did his amazing impression of Beavis by grunting twice. Wow. It was ultimately redeemed by the two Beavis-inspired grunts. You’ve outdone yourself, Fallon. His hair looks wet, I guess.

Fallon then said “into another shower” or something and his friendo concurred that Smith wants to be clean. Haha, being clean! Funny! Then they actually did it. Sprong retweeted the Tonight Show’s tweet, so I guess he liked it…? Maybe? Eh. Whatever.

Anyway, this was the superlatives from the Tonight Show for the 2017 Stanley Cup Final.