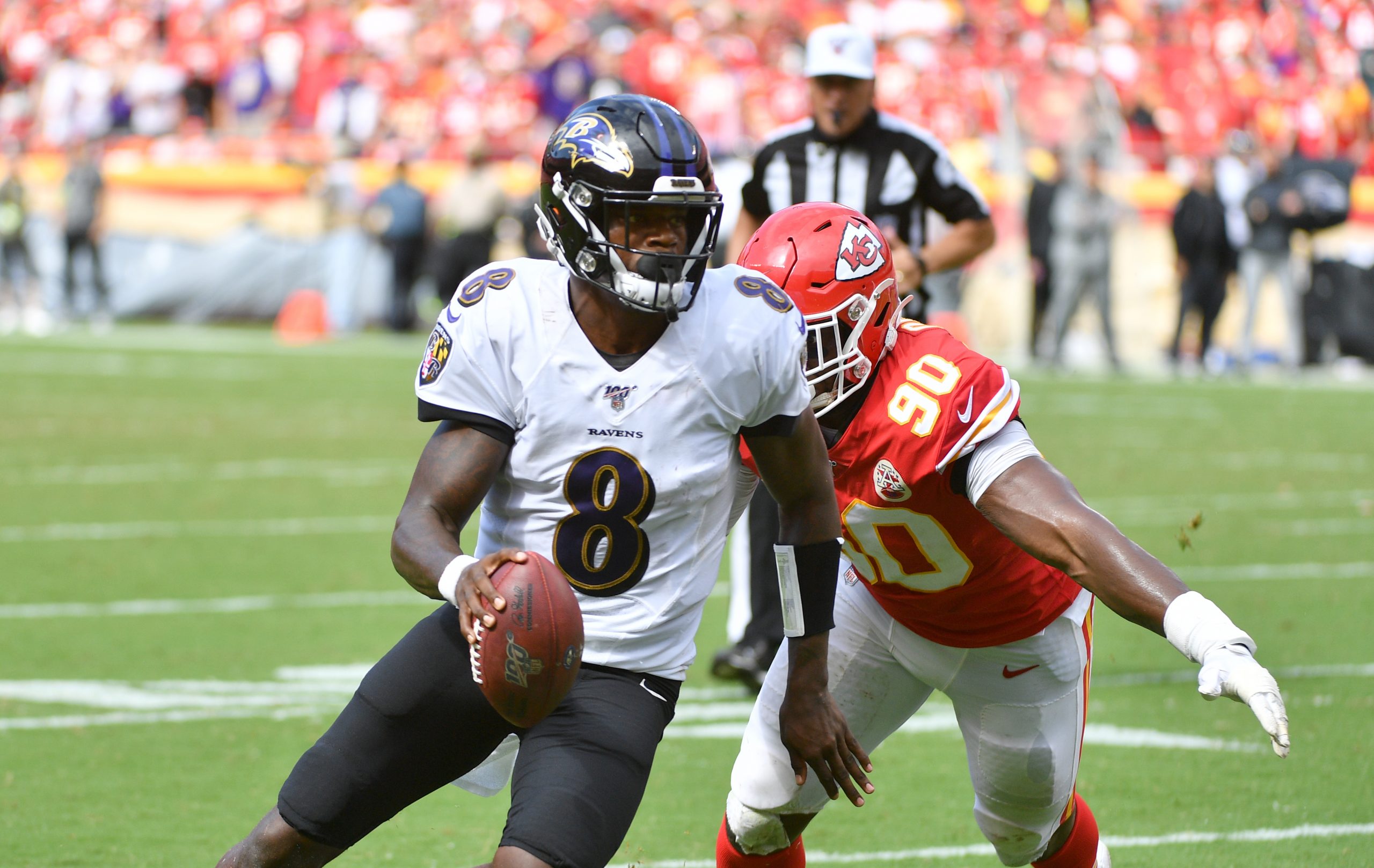 The guy who screwed up Baltimore’s first game of the season came back to save the second one.

With a somersault touchdown and a clutch fourth-down conversion, Baltimore Ravens quarterback Lamar Jackson beat the Kansas City Chiefs and his self-described “kryptonite” for the first time in a thrilling 36-35 victory on Sunday night.

Jackson carried the short-handed Ravens to their first win over Patrick Mahomes and the Chiefs (after three consecutive career defeats) by running for 113 yards and throwing for 239 yards.

The odds were seemingly stacked against Baltimore, which was down several injured players and trailed by 11 points (35-24) to start the fourth quarter. Jackson then delivered the biggest fourth-quarter comeback of his career, running for two touchdowns including a flip into the end zone for the winning 1-yard score.

“It feels good to get that monkey off of our back,” said Jackson, whose three of eight regular-season losses have come against Kansas City. “We’ve got to move on to Detroit now. We didn’t win the Super Bowl yet; it’s just one game. We’ve got to just keep staying focused.”

The Ravens evened their record at 1-1 with one of their most improbable victories. Injuries forced Baltimore to play without All-Pro left tackle Ronnie Stanley, its top two running backs, first-round wide receiver Rashod Bateman as well as a dozen others on injured reserve.

But the Ravens had Jackson, which gave them all of the confidence they needed to upset the reigning AFC champions. Up 36-35 with 1 minute, 5 seconds remaining, Harbaugh yelled to Jackson and asked whether Baltimore should go for fourth-and-1 at its own 43-yard line.

Jackson took the snap in the pistol formation and ran up the middle of the defense, putting his head down for a 2-yard gain to close out the game.

It was a gutsy run by Jackson and a nearly unprecedented call by Harbaugh. Since 2000, this marked only the second time that a team went for it on fourth down in the final two minutes of a game when leading by less than a field goal, according to ESPN Stats & Information research.

Was there any doubt that Harbaugh was going to go for it?

“No, there wasn’t,” Harbaugh said. “But I think I wanted to be sure myself, you know? I knew [Jackson] was going to say yes, but we were going for it at that point.”

Jackson became the first quarterback in the Super Bowl era with 100 yards rushing and two rushing touchdowns in multiple games. He also tied Michael Vick for the most 100-yard rushing games by a quarterback with his 11th (including playoffs).

This just didn’t have the makings of a record-setting night for Jackson. He threw two interceptions in the first quarter, including a pick-six on his second pass attempt.

“I know my team is going to look at me,” Jackson said. “If I’m out there just messing up, they’re going to be like, ‘God damn, what are you doing?’ So, I’ve got to do it for my guys. My guys have my back. The first two interceptions, they were like, ‘Man, you’re good; you got that out the way. Let’s just play.’ I was like, ‘You’re right, I’ve got to play now. That’s over with.’ And that’s what we did.”

Jackson settled down, throwing a 42-yard touchdown to Marquise “Hollywood” Brown in the third quarter before setting up his greatest comeback.

Before Sunday, Jackson was 0-6 in his career when trailing by 11 or more points in the fourth quarter (including playoffs). His previous biggest comeback was three points (Week 5 in 2019 at Pittsburgh).

His high-flying 1-yard touchdown with 3:14 left gave the Ravens their first lead and put them ahead for good.

“He’s incredible, man,” Ravens tight end Mark Andrews said. “That’s the guy right there. It’s hard to put into words, but he put the team on his shoulders many, many times tonight.”

Like a video game with no controller for defense, the teams moved up and down the field with little opposition. Most thrilling was Travis Kelce’s 46-yard slalom in which he avoided nearly the entire Baltimore defensive unit before falling into the end zone, exhausted.

But it was not enough because Mahomes finally threw an interception in September, to Tavon Young, which set up Jackson’s first touchdown run.

“We were strong and together and we kept that focus,” Jackson said, referring to the overtime loss at Las Vegas to open the season. “I know my team is going to look at me and I got to do it for my guys.”

The Chiefs broke a 14-14 tie with a precise drive late in the first half, sparked by a 20-yard screen pass to backup tight end Blake Bell. Darrel Williams ran it in from the 10 with 51 seconds to go.

That was enough time for Baltimore to reach field-goal range for Justin Tucker, who nailed a 43-yarder. The problem for the Ravens: Kansas City got the second-half kickoff.

Mahomes capped a quick 74-yard drive with a short pass to Byron Pringle, who eluded two tacklers for a 40-yard score and a 28-17 lead.

And the problem for the Chiefs was their defense, which was getting shredded — aside from Tyrann Mathieu’s interceptions — had to take the field. It completely lost Marquise Brown on a 42-yard jump pass TD four plays after Pringle scored.

“Lamar’s a heck of a football player,” Chiefs DE Frank Clark said. “He does everything that he can. … They took it. They came in, beat us in the rushing attack. We missed tackles.”

Of course, with Mahomes chucking the ball and guys like Kelce catching it, the Chiefs barely shrug in such circumstances. And Kelce’s highlight-reel touchdown restored the 11-point margin; he finished with seven catches for 109 yards.

Young’s pick — Mahomes said “It’s probably one of the worst interceptions I’ve probably ever had” — set up Baltimore near midfield and yet another quick drive was finished by Jackson’s sprint right and dive for a 2-yard score. But a 2-point conversion pass to Brown was negated by a penalty and the Ravens failed on the next try.

They didn’t miss the winning score when they got the chance to go ahead. That Jackson made like a gymnast added a superb twist to it all.

“I love being around this team,” Harbaugh said of his undermanned group. “I told them it would be an honor to be on the field with them. What makes me proud of these guys is that’s who we are and what we do.”

Kansas City struck quickly — and with its defense. When receiver Sammy Watkins, a former Chief, slipped, Mathieu was there to grab Jackson’s second pass of the game. The 2020 All-Pro sped down the left side for a touchdown.

Baltimore answered right back on a 75-yard drive highlighted by Devonta Freeman’s 31-yard run. From the Chiefs 10, running back Ty’Son Williams was headed into the end zone when he fumbled. The ball popped into the air to teammate Devin Duvernay, who surged in to tie it.

So the Chiefs responded with a 92-yard drive capped by Demarcus Robinson beating Anthony Levine on a post pattern for a 33-yard score. Less than nine minutes in, it was 14-7.

Mathieu’s second interception of the opening quarter ended another impressive Baltimore drive as Jackson threw into triple coverage. It didn’t help much as penalties put the Chiefs in a third-and-39 — and not even Mahomes Magic could handle that.