Ray Tanner does it again 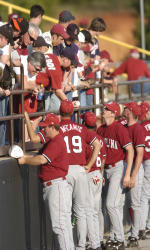 This marks the 2nd time in the last three years that the gamecocks have brought in the nation’s top recruiting class orchestrated by Jim Toman.

The class includes 23 athletes which breaks down to 13 high school players and 10 junior college athletes.

The two players that will play a major role in this years season will be two SC studs Reese Havens from Biship England H.S and Justin Smoak, from Stratford H.S. Both were all-America last year in high school. A few notable players that will shine in a gamecock uniform, Will Atwood, SC AAA player of the Year, and Mike Cisco from Wando H.S.

Poor Clemson, I guess 24 is good too, see you in the spring.