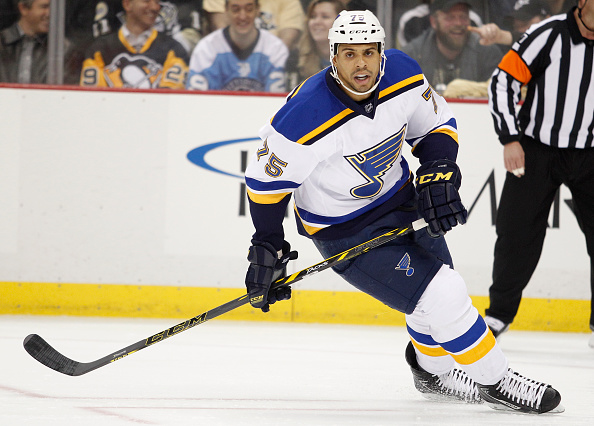 The St. Louis Blues named their list of protected players ahead of the 2017 NHL Expansion Draft and Blues fans didn’t find any surprises. Jori Lehtera, David Perron and several others were left exposed as the Blues instead opted to protect players such as Vladimir Sobotka and Ryan Reaves.

While Blues fans were content with the selections, hockey fans who aren’t closely following the team (as well as some media outlets) expressed their surprise that Reaves made the cut. They were puzzled why a fourth-line player would be protected. Those mainstream hockey fans clearly haven’t followed the Blues close enough to know just how underrated Reaves is as a forward.

Let’s start with the stereotype that Reaves is just another fourth-line enforcer. While he does spend most of his time on the fourth line, it is worth noting he does pull off the enforcer role extremely well. When he drops the gloves to fight, he usually wins. If you’re going to call him an enforcer, at least admit he’s a damn good enforcer.

To be clear, Reaves isn’t just an enforcer. He’s much, much more than that. He was a member of the Blues’ fourth line which was arguably the best in the NHL. On countless occasions the fourth line was able to get the puck in the offensive zone and keep it there, cycling and wearing down the opponent. That’s an intangible, but Reaves’ career-high offensive totals in 2016-17 (seven goals and six assists) show that his game is rapidly evolving.

Let’s talk speed and size. As a whole, the Blues aren’t very big. They’re also not very fast. Reaves isn’t the fastest player on the team, but he did work on his skating throughout the year and is notably improved when it comes to his speed and maneuvering on the ice. His skating is a clear strength. When it comes to size, Reaves (on paper) is listed as the heaviest Blues forward at 225 pounds. Make no mistake that most of that is muscle. The Blues were criticized for being too small, especially up front, but Reaves helps buck that trend.

As the year progressed, Reaves was used more often in situations beyond his normal role on the fourth line. He was used in front of the net (he’s the largest forward, as previously mentioned) and even spent time on the third line. His average ice time grew to 8:53 per game, almost a minute higher compared to 2015-16. When Mike Yeo was promoted to the head coach position, he appeared to favor Reaves’ capabilities in other roles more so than Ken Hitchcock. The fourth line’s role grew and may even grow further in 2017-18.

Then there’s strategy. The Vegas Golden Knights have some seriously good options to choose from at the expansion draft. They have a ton of great top-9 options. Had the Blues elected to protect Perron, a forward who had a good regular season but a dreadful postseason, and left Reaves unprotected, the Golden Knights could have picked up one of the game’s best fourth-line players. Instead, by leaving Perron and all of his faults exposed, the Blues could emerge from the draft with both players still in the mix.

Simply, the Golden Knights have top-9 options far better than Perron. They might not have fourth-line options in the draft better than Reaves. If the Blues thought the Golden Knights would prefer Reaves over Perron, the move makes complete sense. Even if that wasn’t the case, selecting Reaves over Perron is the correct decision due to the fact Reaves is better in his role than Perron is in his.