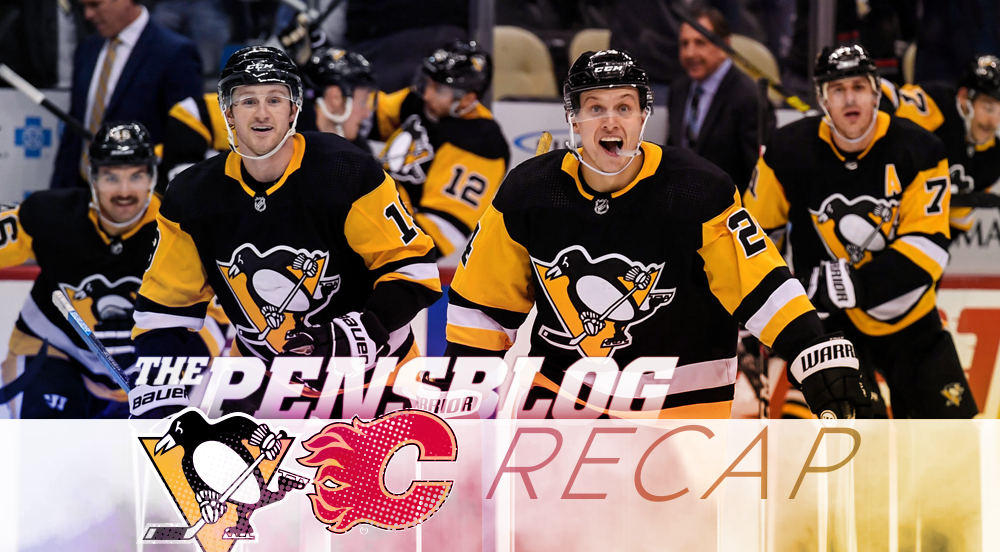 ARE YOU READY FOR SOME GOALIE TAKES?!?!

Too bad, you aren’t getting them in this recap.

In case you’re too obtuse to understand, the Penguins have:

Any other takes are wrong and incorrect. It’s blog law now.

The only surprising news of the day was that the Pens would roll with the same lineup they had in New Jersey with one addition: Letangarang would be back in the top spot on defense.

Yes, this meant Jarry was in net and Murray was not.

Welcome back to the lineup, @Letang_58! pic.twitter.com/bYx5XupeC2

Wasn’t the greatest start and to make matters worse, that 7:34 was picked for a reason by Wes.

Dillion Dudebro would open the scoring for the Flames.

Dube circled out of the corner to some pressure, worked the puck to his point man Andersson and found a soft spot in the middle of the ice between the winger Kahun and Simon the center for a return pass.

Andersson found him, Dube outwaited Trotman who was in good position then beat Jarry low to the stick side.

Maybe we can make “but Jarry’s blocker” a thing, but I digest.

The first period was especially ugly, holding a 28% CF rating. By all accounts that is “bad.”

However, the Penguins still possess the firepower to have games like this and come out on the winning end.

With a power play dwindling and looking like it would come and go without a goal, Alex Galchenyuk finally broke his goalless streak.

With a clean zone entry thanks to an absolutely unrealistic backhand saucer pass from McCann to Kahun, the Penguins were in business. Kahun, being forced to the wall, makes a safe play and throws the puck on net. Rittich would stop the low-percentage shot and kick the rebound to the slot. The rebound jumped over McCann’s stick right to Galchenyuk and for the first time this season, the easy goal was just that – a goal.

Here’s to hoping this opens the flood gates.

The first would slip away and that’s where it would end.

Jarry held the fort, making 11 saves in the first.

Breaking New’s: We are the McCannsblog now.

He would continue his absolutely white-hot start in the second period. The Penguins for the most part, took it to the Flames in the first half of the middle frame and just over seven minutes in, they would break the tie.

A relentless forecheck by Tanev would gain him possession of the puck after beating Noah Hanifin and the corpse of Milan Lucic along the half wall. Tanev then found McCann at the top of the circle and McCann took three strides, picked his head up, and sent a rocket over Rittich’s glove hand.

That, ladies and gentlemen, is a goal-scorer’s goal.

Put McCann-Galchenyuk-Rust on the same line so we can have the 17-18-19 line, you cowards.

Despite having a rough start to the year, the Flames refused to go away.

Trotman Turner Overdrive was in the box for tripping and Sean Monahan would get not one but two chances to score.

The Penguins do a good job of largely keeping the Flames power play out of the middle until Dumoulin would chase Lindholm to the wall. Lindholm sent it back down low for Gaudreau and Monahan would get lost in the shuffle, sneaking in an open lane in front of Jarry. His first attempt would miss wide, landing on Matthew Tkachuk’s stick.

Tanev makes the smart play to face the puck carrier and put pressure on him to make a decision, which he does.

Blueger doesn’t get to Monahan fast enough and with his second chance, he makes no mistake, this time going high glove instead of low stick side, tying this bad boy up at two.

Save for a long wrist shot from Jared McCann…the third period was rather uneventful and no one scored.

Pens grab a point, keep the streak alive, and look for the extra in overtime.

If the third period was low-event, boring hockey, 3-on-3 overtime was the Jon Bois tweet in the regular season.

The turning point of overtime was Johnny Gaudreau whiffing on a breakaway he had from the red line in.

He would attempt to go forehand-backhand and just lose control.

About a minute later, Jake “Product of Sidney Crosby” Guentzel, would call game.

Unreal awareness by Kahun to pull up at the blue line and wait for fresh Troop’s (salutes the flag) off the bench. He retreated slightly back to the neutral zone and finds Jake waiting at the blue line.

Using Hanifin as a screen, Jake fires a shot across the grain that Rittich struggled to track and beats him just above the pad.

Another Western Canada matchup tomorrow when Elias Pettersson and friends come to town with the Cancuks.