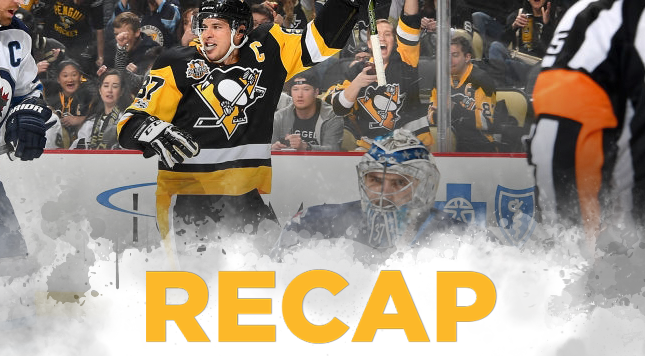 Insanity (noun): doing the same thing over and over again and expecting different results

Boy, it sure seems like we’ve seen this shit before. We were told moving the franchise to Winnipeg, with their loyal and raucous fans, things would be different.  The frozen Canadian tundra of Manitoba would make hockey great again!

Instead, we’ve just got more of the same dreadful display: A bottom third team with a good, flashy, young sniper on their only half-decent line, an okay young goalie that they think is going to be the next big thing, and the prison hockey response when things aren’t going their way (which, by the way, they aren’t any good at that either).

On top of all of that, it should also come as no surprise that a team from Atlanta coughed up a late lead and lost in overtime.  You can take the team out of Atlanta, but you can’t take the Atlanta out of the team.

All it took was 59 seconds for the Pens to hang dong on the Jets.  Hellebuyck made a mess of a flipped dump in and the Pens were on it like sharks breaching a cage.  Hornqvist made the initial play, Wilson kept it alive, and Eugene finished it with authority.  1-0 Pens

Malkin’s torrid pace since his return could’ve netted him 1000 points before Crosby got there with some of the bounces Sid has been getting over the last week or so.  Instead, Crosby finally nailed it last night, becoming the 12th fastest and 86th ever to reach 1000 points on a vintage Crosby play to set up Kunitz.  Kinda fitting Kunitz would be the one to finish on 1000, but the play 87 made to make Blake Wheeler look like a bitch and tee it up earned every bit of the milestone.   2-0

TFW you realize your hardwork of not giving your kid a childhood finally pays off.

Both teams traded off PP chances throughout the period, but nothing else could have possibly mattered beyond Crosby’s assist.

As of course is tradition, the Jets started running around trying to do as much damage as they could instead of just losing with some goddamn dignity.  First, it was Byfuglien planting Schultz from behind into the boards, knocking him out of the game.  Byfuglien gets away with subtle dirty shit like this all the time.

Then, Trouba caught Rowney up high with an elbow as he cut into the slot, knocking him out of the game.

A little later, Adam Lowry would run Maatta behind the play, knocking him out of the game and leaving the Pens with just 4 defenseman.  At that point, enough was enough for Malkin, who got in Lowry’s kitchen and letting him know that shit won’t fly.

On top of the injuries, the Penguins apparently forgot that they actually had to finish the rest of the game after Crosby’s 1000th.

They had to kill off a couple of penalties in the 2nd frame, and though they kept Laine from scoring over on Ovi Street, he did cash in with 2:50 left in the period at 5v5.  Big play from Scheifele to win that race and draw in both Crosby and Letang.  No reason for them both to go, but it left Laine wide open for Perreault to hit him with the touch pass, giving the 18 year old Finn for his 27th of the year. 2-1

With the Pens still stuck in the first intermission, Winnipeg tied it up 4:22 into the period.  Fleury took a dump and threw it to the corner where there were a grand total of 0 black jerseys.  Lowry was there, however, and got a sharp angle shot off that Fleury kicked out to the point.  Postma collected the knuckler and launched it through traffic to find twine.  2-2

Not long after the goal, Malkin popped up yet again with his next target: Blake Wheeler.  Almost wanna feel bad for Wheeler, who got abused more last night than an 8 year old at a Sandusky family picnic.  But Blake Wheeler is also kind of a dick.

Malkin with a high hit on Blake Wheeler pic.twitter.com/zJP5iWecsC

It was a bad hit, no doubt, but somehow, the Pens came away shorthanded with Malkin getting 2 for interference and 2 for roughing and Mark Stuart just getting a minor for slashing, despite all 5 Jets players jumping 71.  They would kill it off, giving them the shit they need to win.  Crosby took over as soon as the penalty expired and drew one of his own for the chance to draw level.

And level they did draw. Letang and Kessel worked the perimeter. Hornqvist got set up in front and Kessel ripped a goddamn laser beam top corner. What a missile.  3-3

Lots of end to end action.  Each team probably could’ve won on no less than 18 occasions.  Probably the best chance came when  Nik Ehlers got a breakaway from McKnight Road after Guentzel lost the puck.  Fleury and Hellebuyck were the showcases of OT and this was no different.

With neither team seemingly able to score, seemed destined for the skills competition, HCMS told Destiny to sit down and shut up, getting 87 and 71 out together with about 30 seconds left.  4-3

Absolutely absurd from Malkin.  Not even Adderall gives people the focus and awareness Geno had to not only disembowel Trouba, but also make the pass right when Hellebuyck bit.

Beaten and battered, the Penguins have to travel to a literal dumpster to take on the Blue Jackets tonight.  Less than ideal.