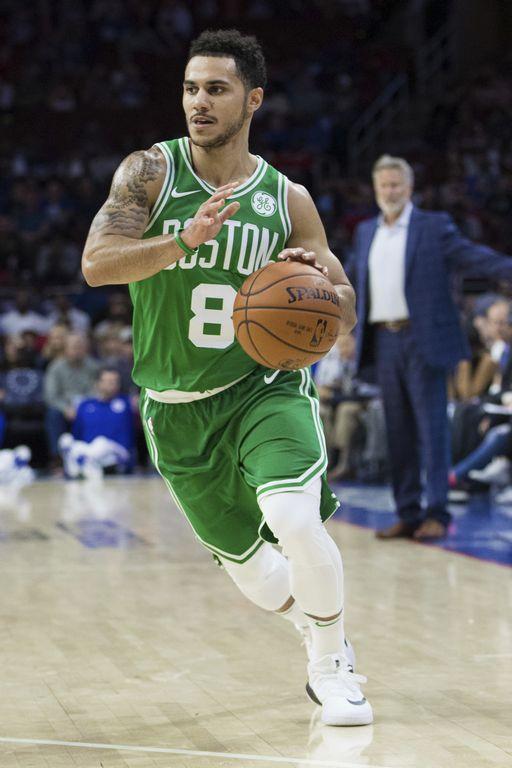 Al Horford remains in the NBA’s concussion protocol. Kyrie left the game early in the first quarter. Jaylen Brown, Marcus Smart, and Terry Rozier combined to shoot 9 of 42 from the field. The Celtics offensive options were extremely limited, and they needed over half of their points to come from the bench, but Boston still found a way to battle back from an 18 point deficit to steal this win away from Charlotte. Their win streak now stands at 11 games. Final Score: 90-87

The Celtics have been infected. We’re not even a quarter of the way in to the season and the injury bug has taken out Gordon Hayward. Al Horford. Marcus Morris and Jayson Tatum for some time. Now Kyrie Irving.

Less than two minutes into the game Kyrie caught an elbow to the face from teammate Aron Baynes, who was focused on getting the DREB at the time. A pool of blood formed on the TD Garden parquet and trainers rushed Kyrie off as the Celtics faithful collectively held their breath. The team, meanwhile, had to still play the game despite seeing their best player leave with an injury (sound familiar?). It goes without saying that it took a while for the Celtics to find any kind of offensive rythym.

Boston was held scoreless until Jaylen Brown mercifully hit a 10 foot jump shot to make the game 9-2. They finished with just 5 makes on 19 attempts in Q1, a sign of things to come for the game. When Daniel Theis is your leading scorer with just 4 points after a full quarter of basketball, you know something has gone wrong. Marcus Smart (1 from 7 in Q1) and the rest of the Celtics faced an uphill battle going into the second down 26-11.

After Aron Baynes on Wednesday, Shane Larkin apparently decided it was his turn for a career night on Friday. Larkin checked in during Q2 and quickly made both attempts from deep along with a layup to make it an 8 point game; his night was just getting started, though- more on him later. Charlotte’s Frank Kaminsky then caught fire (14 points, all in the first half) and things started to get reaaaal ugly for the C’s.

First, Guershon Yabusele didn’t foul Dwight Howard when he was suppposed to, resulting in an easy 3 for the Hornets to stretch their lead. Then, on the very next defensive possession, he intentionally fouled Howard with under 2 minutes left in the half – resulting in 2 shots AND the ball for Charlotte thanks to those new NBA rules. The bonehead plays didn’t stop there, as Terry Rozier quickly followed this up by fouling Kemba Walker as he shot a 3 prior to the halftime buzzer. The Celtics looked out of focus and uninspired, to say the least. They brought a 57-41 deficit with them into the locker room at half.

The second half may have been as ugly as the first, but this time it was in the Celtics favor. It began with Jaylen Brown missing yet another attempt at the rim only for Aron Baynes to scoop it up and lay it in. Baynes, for his part, continued to play stellar D on Howard but didn’t follow up on his career night Wednesday, as he finished with just 4 points and 7 rebounds on the night. Marcus Morris picked up the slack, instead, and led the way for the Celtics offensively with 14 points on 5 of 10 shooting from the floor. The Celtics finally outscored the Hornets in Q3, but still trailed 76-64 heading into the fourth.

The combination of the Celtics’ second unit defensive effort and Charlotte’s inability to focus for a full 48 minutes finally gave the TD Garden something to cheer for during Q4. Shane Larkin came out of nowhere and was a gamechanger tonight – from open 3’s to stepback jumpers and lock-down defense- everything was working for him.

Jaylen Brown, on the other hand, had one of the ugliest shooting nights in his young career after he finished 3 of 14 from the field (but added 13 REB). The important thing for any young player going through a slump is to keep their confidence up, though, which is why his shot from deep to make it a 3 point game late in the 4th was extra clutch.

The Baynes, Yabu, Larkin, Rozier, and Brown lineup suffocated the Hornets as they had continued to cough up the ball and allowed the Celtics to claw their way back into the game. Whether it were an offensive foul, a travel call, or Charlotte simply throwing the ball away, the tide had turned in Q4 and you have to credit Boston’s defense for keeping their energy up through out the game. Charlotte had been imploding right in front of our eyes.

Jayson Tatum improved his aggression in finding his shot and demonstrated great body control in takes to the basket during Q4. In fact, by the end of the game Tatum was tied with Shane Larkin as the Celtics leading scorer. The C’s officially took the lead with a Jaylen Brown coast-to-coast finish and they wouldn’t let this get away from them. Marcus Morris sealed the deal with a deep 2 at the end of the game and the Celtics had escaped with the win, 90-87.

The Hot and Not

Hot: Shane Larkin, my man! He finished tied with Jayson Tatum for the team leader in points with 16 and was the only Celtics player to make over half of their shots tonight. He also made life hell for the Hornets guards in the 2nd half as he picked them up early and suffocated them every trip down the court. Without Larkin tonight, the Celtics wouldn’t have this W.

Not: The Celtics shooting. This award could have gone to Smart, Brown, or even Rozier for that matter-  but in reality, the whole team needs to shoot better. They made just 35.7% of their shots tonight including a paltry 29% from deep. They’re going to have cold nights like this once in a blue moon, let’s just be thankful they got the W and hope it doesn’t carry over into their next game.

What the Hell Just Happened?!

After holding a commanding lead all night long, you know the Hornets were wondering what the hell just happened after Shane Larkin nearly completed the comeback with this step-back jumper in the final frame. The Celtics went on to outscore the Hornets 26-11 in Q4 thanks in large part due to his sharp shooting.

Shane Larkin and Jayson Tatum took over down the stretch and combined to make tonight's @JetBlue Play(s) of the Game! https://t.co/IpXqfbrqlT

Boston finds the open man and Morris cans a trey! C's trying to claw their way back. https://t.co/f9eOVwnOMa