Recap: Magic challenge Celtics for Eastern Conference supremacy, but the streak goes on 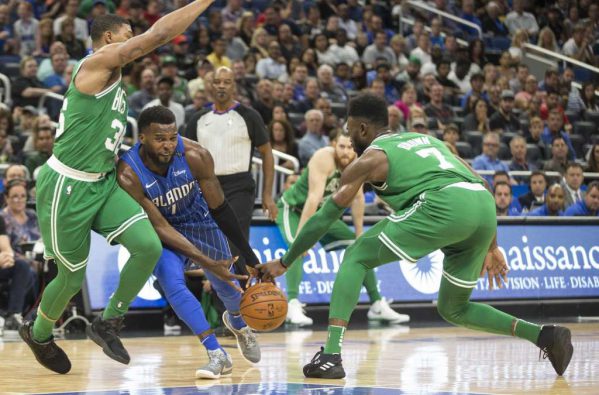 The Orlando Magic may be the NBA’s most inexplicable team. Their current position near the Eastern Conference peak is proof of that, because the team is mostly identical to last year’s (also proof of “it’s early in the season so stuff is weird”), yet there they reside. Nevertheless, the Boston Celtics streak (now at 8) continued, as the team fought past early discombobulation to get a win for which nearly every player on the roster meaningfully contributed.

Boston struck first but Orlando took Q1’s first substantive lead of 9-5. The Celtics weren’t quite ready for the surprisingly outstanding (so far this season) Nikola Vucevic and Aaron Gordon, particularly the latter’s capability for hyperathletic rim attacks. Promising rookie Jonathan Isaac also made his presence felt with a three and a respectable dunk, and all of the Magic’s players contributed to the team’s strong rebounding. Soon enough, though, the Celtics got their bearings, fueled largely by the ever-building court chemistry between Kyrie Irving and Al Horford. A few wide-open treys for Al, one from Jaylen, and drives by Terry Rozier and Aron Baynes, and Boston stole the lead, though Orlando kept close behind.

A mostly uneventful first quarter, to be honest: Brian Scalabrine’s comment on the NBCS Boston broadcast about the game feeling preseason-esque, made early in the second frame, aptly emphasized this. Neither team seemed quite at the top of their abilities, particularly from beyond the arc. (Sunday games have long bedeviled NBA teams who’ve spent the previous night in certain cities, so it could’ve been that, or fatigue from the Friday thriller in OKC.) After some technical skullduggery concerning a game clock that couldn’t get in sync with the shot clock, the Celtics took a much more substantive lead, this on the back of Jayson Tatum and Marcus Smart’s efforts with the second unit.

Magic head coach Frank Vogel countered by unleashing veteran backup PG Shelvin Mack, who offered some instant and intense offense, but not enough to get any closer to the Celtics’ score than 5 points apart. Before long, an 18-4 run by Boston–distinguished by highlights like a Smart strip-steal that became a running Semi Ojeleye layup, as well as a Brown dunk–put the half well out of reach for Orlando, as it came to a close with Boston ahead 49-38.

Neither team shot well in the game’s first half, but Orlando was a lot more wretched–33 percent when Q3 started. They mostly had their best results when Gordon drove hard as he always has or came off screens to show off his much-improved jump shot. Jonathon Simmons, whose abandonment by the San Antonio Spurs I still fail to understand, also helped, successfully baiting Kyrie into fouls and heading to the line. (First of those looked more like a clean block attempt to me, but it went in the basket anyway, so what the hell.)

Comfortable with their lead, Boston’s defense became lax, and Orlando made something of a run, aided in no small part by their ability to reach the charity stripe and make all their free throws, something Boston couldn’t do. Terrence Ross was particularly good at this. But deadeye 3-point shooting from Horford and Brown, often via artistic Kyrie assists, kept the Celtics lead just outside of the Magic’s striking distance. Ojeleye also got to show off the beyond-the-arc accuracy we saw at summer league (OK, maybe you didn’t, because you have a life, but I don’t and did). For Q3’s final minutes, the Cs second unit handled most of the work: Smart showed off the best ball he’s played since returning from injury, largely posting up on mismatches and baiting defenders into fouls.

Marcus Morris has been uneven in his two games as a Celtic, but A. it’s been two games and B. he’s returning from injury. Either way, he showed good signs during the beginning of the fourth quarter, hitting fadeaways he missed earlier and making up for those dud shots with valuable rebounding and defensive hustle. In fact, the lineup for half of the fourth was Rozier, Smart, Shane Larkin, Morris and Baynes, and that lineup rebuilt Boston’s lead to double digits. (Which was fortunate, because Kyrie had a bad shooting night, and as good as Horford played, one doesn’t want him to be a primary offensive option, so the work by Smart and company helped a great deal.)

Brad Stevens sent in most of the starters–Kyrie, Al, Tatum–for the final 6 minutes, but when Boston’s lead quickly ballooned to 20-plus points he switched to Tatum and the bench mob. Vogel, seeing the writing on the wall, cleared out his bench to let Isaac get tick (and show some nice moves) and have the wonderful man that is Mareese Speights score some pointless but joyous buckets. Despite his 6 garbage time points, the Celtics took home their eighth straight win, 104-88.

THE HOT AND NOT:

Not: Kyrie’s shooting, Rozier’s shooting, a higher overall turnover figure than one would like (13), bad officiating.

Mook Morris took a terrible shot here, but it went in and looked hilarious. This can double as this game’s WHAT THE HELL WAS THAT? moment (which I know hasn’t appeared in all games, but not all games have them).

And in closing, if Horford remains this accurate from beyond the arc, this Celtics squad will have chances at much more than we probably thought early on in the season: