RECAP: Night of the living dead. 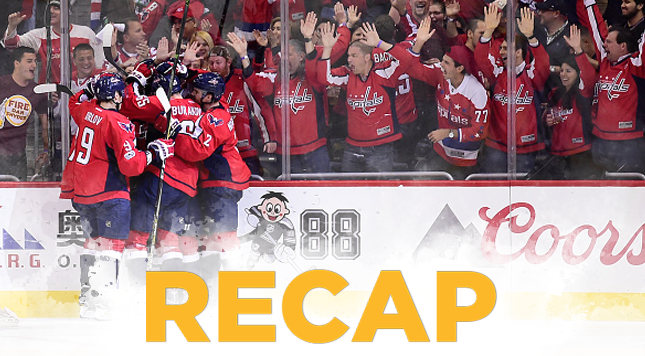 It only took five games for the team who came up with the idea for a President’s trophy to finally show themselves in this second-round playoff series. The captain who currently has more people talking about whether he is hurt or injured, as opposed to him getting over his lingering postseason failures finally got his name called. The goalie who may or may not possess a bad glove hand, but definitely has a terrible neck beard didn’t choke in a way that is eerily symbolic of his team’s history in a nutshell. And for one night, the Caps’ fans in Washington could celebrate.

For one night, the Caps were alive. Because of that, they’re still alive in this series.

If you said to anyone before the series began the Pens would win it in five, they’d probably ask you where you get your weed and why haven’t you offered to share any of that weed. The money was on the table for the Pens, but the Caps showed they weren’t going to be a complete pushover here. There was some fight left in the Caps, and they pulled out a ballsy win at home. Bottom line; Stone Cold said so.

Sidney Crosby played fine and didn’t die like so many people expected. Fleury wasn’t as good as he has been but still played good enough for the Pens to win. You can’t definitively point to one area where the Pens shit the bed; five games of being outshot caught up to them in the third period, and collectively there just wasn’t enough good fortune left in the barrel to win a series closer against a good team on the road. Doesn’t really mean anything more than they’re going back to Pittsburgh for Game 6.

Here’s some real hard-hitting analysis: The Pens just have to play a little better to delete the Caps. That’s about it. The sky isn’t falling. It probably isn’t time to send Matt Murray back into goal after two practices, nor turn to Tristian Jarry who went to prom last week.

The Pens have been money at home all season. The Caps are still down in this series, and if I know the Caps — and I think I know the Caps — this victory in Game 4 in front of their home crowd was the last ditch effort to save some face. The Pens come out with a little more jam in the bread Monday night and I think we’ll be seeing some handshakes. We’ll see.

We’ll get right to the meat and potatoes here. The Pens went into the third with a 2-1 lead. When the third period rolls around with the Pens in front, it’s like the Undertaker taking off his glove — you know this shit is over. Not this time, though. That all came crashing down when Dick Backstrom tied things up a few minutes in:

You don’t really ever expect Carl Hagelin to get his doors blown off on a backcheck but I guess that’s the way she goes when you’re coming off a broken foot. Not a lot Cole could do there to help since neither Kessel nor Malkin got to Oshie. Like the first minute of a Mia Khalifa film, you knew things were about to get messy fast.

The Caps were surging and less than five minutes later they’d put the game away. They went on to net two goals in 27-seconds — first Evgeny Kuznetsov threw a bad-angler at Fleury that snuck through, then Ovechkin followed his own rebound and roofed it for the final tally.

Russians stopped Hitler from advancing too quickly and they did it again here. Both goals came off blocked shots, which is pretty indicative of how bizarre this series has been. The Caps have dominated all offensive statistics except goals scored. They’ve had more shots, more scoring chances, more everything, and these two back-breaking goals come when the Pens actually do a good job of slowing it down. Sports are fucking weird.

In the end, whatever. Caps were gonna win one at home, the Pens weren’t winning this in five, Ovi and Backstrom and Holtby were bound to do something.

This is a garbage hit by Tom Wilson pic.twitter.com/bdJ7rhjKr3

Serious question: Does Pierre wear a Penguins tshirt under his suit when he is between the glass?

Crosby to Malkin to Kessel.

It's just not fair. pic.twitter.com/jGI6tge79p

Game 6 is Monday. While we feel good about it, still, the Pens better bring their A-game. A Game 7 in Washington doesn’t sound like anything anyone wants to sign up for. Buckle up, buckaroos.