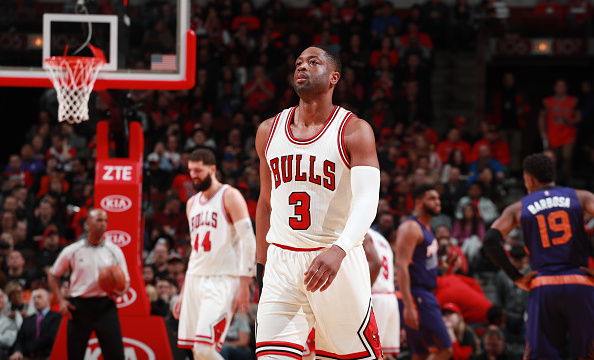 Dwayne Wade’s time with the Chicago Bulls will soon be coming to an end, after K.C. Johnson of the Chicago Tribune reported Sunday evening that Wade and the Bulls have reached a buyout agreement. With Wade now about to become a free agent, Adrian Wojnarowski of ESPN.com reports he’ll have four suitors in the Cleveland Cavaliers, San Antonio Spurs, Miami Heat and possibly the Oklahoma City Thunder too.

Wojnarowski reports the Cavaliers are considered the frontrunner at the moment to sign Wade, but, Wade will take some time before making a decision. The current rosters of the four teams above are listed below.

Here’s a brief look at each roster with how many players they have, how many players are on guaranteed contracts and who each team might have to waive should Wade choose to sign with their club.

18 players on the roster

Waive Forbes – Should Wade choose San Antonio, along with the other camp invites, Bryn Forbes would likely be the player waived for the Spurs to offer Wade a guaranteed deal. Forbes is currently on a non-guaranteed contract that will guarantee if he remains on the roster past 01/10/2018.

Waive one of Calderon, Green or Rose – One of the recent veteran signings in Jose Calderon, Derrick Rose, or Jeff Green would likely be waived to open a spot for Wade in Cleveland.

Outside of their camp invites, the Heat wouldn’t have to waive anyone on a guaranteed contract to make room for Wade.  The Heat though would have to decide between Okaro White and Rodney McGruder, since both of their deals will become guaranteed if they remain on the roster for the first game of the regular season.

Once the Carmelo Anthony trade is completed, the Thunder will have 13 players with guaranteed contracts. Oklahoma City wouldn’t have to waive anyone for Wade to sign, but the Thunder would have to make a choice on whether to keep Jerami Grant or Semaj Christon.