Residue Of The Revenge 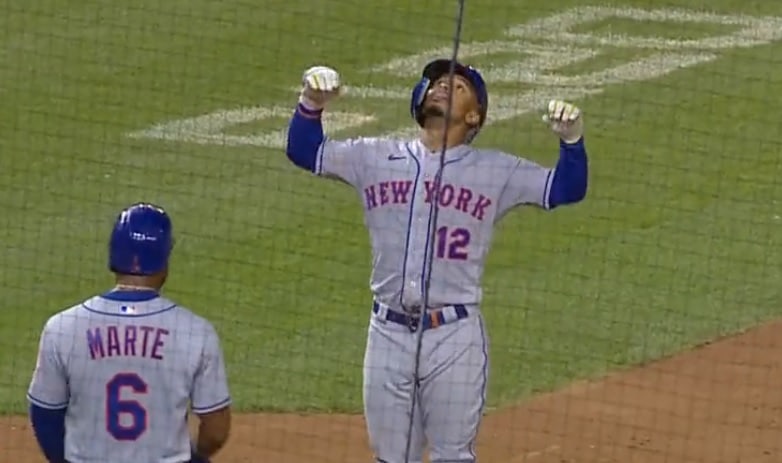 The game started out with rare vapor locks by the Mets defensively. Of course they came after I praised them yesterday for keeping their heads in the game with a 6-0 lead, so way to make me look good, there. But no matter, because the Mets are the Mets and the Nationals are trying to figure out how much of their team will be left tomorrow. So the Mets raced out to a 4-1 lead on RBI singles by Jeff McNeil and Tomas Nido in the second, and a dinger by Pete Alonso in the third.

Max Scherzer was battling himself a little bit tonight. He gave up a home run to Juan Soto to make it 4-2 in the bottom of the 4th, and then he gave up singles to Yadiel Hernandez and Nelson Cruz which preceded an RBI single by Luis Garcia to make it 4-3. The Soto HR and the singles by Hernandez and Cruz were of the same ilk: Nido setting up on the edge, but Scherzer’s pitches on the hits all drifted towards the middle. The single by Garcia? I can’t explain it. It was a waste pitch up and away and Garcia probably shouldn’t have hit it, and hitting coaches would probably have told him not to try. But Scherzer battled through his iffy stuff to gut through 6 and 2/3’s, which in my mind is every bit as impressive as electrifying the Yankees (which is different from electrocuting the Yankees, which I hear might be illegal.)

But the Mets put the game away in the 6th. With two outs and nobody on base, Brandon Nimmo smacked a long double to the opposite field gap off Steve Cishek. Then, Cishek hit Starling Marte with a pitch to put two runners on for Francisco Lindor.  Notable? Well, remember this?

Steve Cishek throws a dangerous pitch to Lindor, a day after Pete Alonso was hit in the face, and we have the first benches clearing incident of 2022 pic.twitter.com/YLXplPB7GD

It was the moment that made Mets players and fans love Buck Showalter. And I’m sure Francisco Lindor remembered that (he said as much after the game). If he was looking for any sort of revenge, well … he got it.

Speaking of hot hitters, Francisco Lindor — who went 7-for-11 in the Mets' three-game series in Miami — just broke this game open with a three-run homer off Steve Cishek.

Now, if it were me trying to get revenge, I’d be swinging the bat at a million miles an hour trying to pull it 500 miles. But Lindor is a major league baseball player and I’m not. Major Leaguers seem to turn any sort of anger they have into focus, like turning old newspapers into kitty litter (shout out to Feline Pine). Lindor kept his head down, made solid contact with great mechanics, and went the other way. Focus instead of anger wins every time. Francisco’s home run is the residue of the focus.

The Mets, after their 7-3 win, it should be noted are 10-2 against the Nationals in 2022. It’s the same old story every year: You beat the dregs of the N.L. East consistently, you win the division. 10-2 against the Nats and 10-4 against the Marlins are numbers the likes of which they haven’t put up against second and third division teams in a long, long time.

Next up: the trading deadline, Jacob deGrom’s return, and probably a couple more Mets getting hit with pitches from relievers who have no idea where the ball is going becaue they traded away all the semi-decent ones. So please, if you’re reading this, don’t hit any Mets tomorrow. Because chances are, you’ll be pitching for the Nationals at some point. (Or … maybe play right field?)