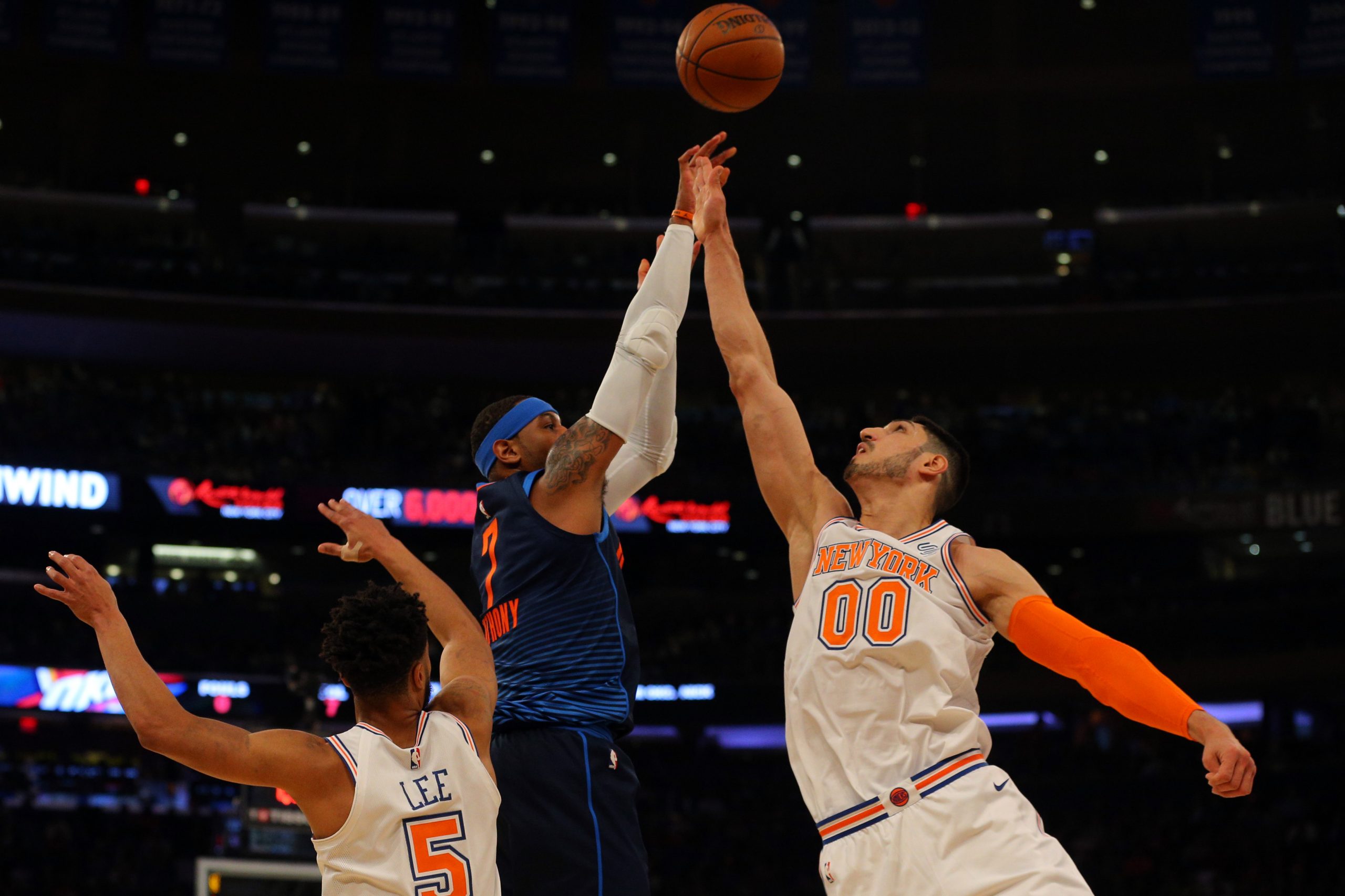 One year ago today, Steve Mills and Scott Perry picked up the pieces from Phil Jackson’s mess and decided to start fresh with the Knicks franchise by trading Carmelo Anthony.

Though Anthony was coming off a year in which he averaged 22.4 points, the Knicks’ continued failure to make the postseason plagued his legacy. What’s more, his presence as the centerpiece of a stagnant squad raised doubt in many that New York would ever get over the hump with him leading the way. It was time for a change, but thanks to Jackson’s public criticisms of the 10 time NBA all-star, his trade value appeared diluted.

Anthony’s departure was always going to be considered addition by subtraction, but it was crucial for the Knicks to get something meaningful back. The team’s return haul of Enes Kanter, Doug McDermott, and a future second round pick was initially considered to be underwhelming, but in hindsight, what a miracle it was. Mills and Perry pulled off a masterpiece, especially given Anthony’s decline.

Kanter transformed himself from an afterthought of a sixth man in Oklahoma City, to becoming the heart and soul of the Knicks. He’s a vocal leader that takes pressure off Kristaps Porzingis, all while priding his play on physicality and an intense hunger on the offensive glass. The big man averaged 14.1 points on 59% from the field with 11 rebonds per game last season. He was amongst the league leaders in various categories. If Porzingis didn’t get hurt, the Knicks would have continued to flirt with postseason contention and Kanter would have likely been an all-star in February. New York is fortunate that he exercised his player option for the 2018-19 season. The team will be targeting marquee free agents next summer, but if Kanter remains consistent, it would be nice to see Knickerbocker brass reward him and find a way to keep someone who actually wants to be here in the fold.

Doug McDermott ignited the Garden crowd early in the campaign with his long range shooting, but Mills and Perry had the foresight to see he was going to cost them a pretty penny when his contract expired in the summer. They were right — he signed a $20 million, three year deal with the Pacers. Instead of holding on to McDermott, the front office flipped him in a three team deal for Emmanuel Mudiay. The jury is still out on the 2015 lottery pick, but at 22 years old, there’s plenty of room to grow and he’s still on his rookie contract through this season. New coach David Fizdale has raved about the point guard on multiple occasions already, so perhaps he holds the keys to unlocking the youngster’s potential.

Last but not least, that future second round pick became Mitchell Robinson in this past offseason’s draft. Fans should be excited about this selection. The big man is an athletic freak who awed crowds at NBA Summer League. He’s a beast on the boards and knows how to utilize his length on both ends of the floor. He’s an intimidating presence on defense, and loves to cash in on second chance points off the rim. Trey Burke compared him to Shaquille O’Neal during media day, but he showed more modest flashes of Marcus Camby in Las Vegas. At 20 years old, this kid has tremendous upside as part of the Knicks’ budding young core.

New York was right to move on from the Carmelo Anthony era. With the future Hall of Famer eyeing a sixth man role in Houston and the Knicks putting pieces in place to grow organically in contrast, it’s not out of the question to suggest they came out victorious on the other side of that deal.