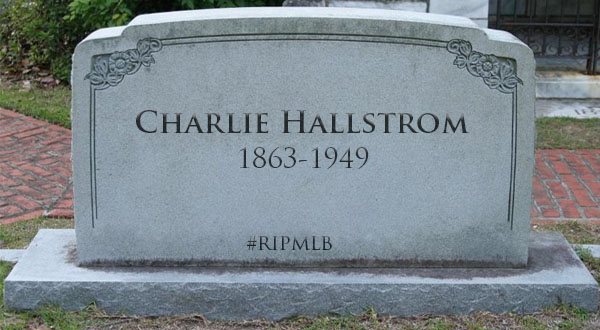 He pitched one game for the 1885 Providence Grays.

In 1885, it was fairly common for teams to use a two-man pitching staff. It was also fairly common for pitchers to blow their arms out after a few seasons, incidentally. The Grays had a good pitching duo with Old Hoss Radburn and Dupee Shaw, but every once in a while the Grays needed another pitcher to give them a rest. Usually, they would find an amateur pitcher and bring him in for a game.

Such is the case with the Swedish Wonder. Hallstrom was born in Jonkoping, Sweden on January 22, 1863. He emigrated to the U.S. in 1865 —or 1868 depending on which census record you read. By 1885, he was pitching for semi-pro teams in Chicago and had earned his dandy nickname.

The Grays signed Hallstrom to pitch the September 23 game against the Chicago White Stockings. It didn’t go well. The wire reports stated that “the home team gauged his delivery and batted him very hard, taking the game with ease.” In nine innings, Hallstrom allowed 16 runs (11 earned) on 18 hits, six walks and a wild pitch. King Kelly hit two home runs off Hallstrom, and Tom Burns added a homer in a 16-8 drubbing. At least Hallstrom gave Radbourn and Shaw a day off, so he did his job.

Hallstrom continued to play baseball throughout the Midwest into the early 1890s, as a pitcher and occasional catcher and outfielder as well. He was a star pitcher for the Chicago Whitings, a team in a citywide league, as late as 1892. City census records show he became a tailor after his baseball days were done.

Charlie Hallstrom died on May 6, 1949 at the age of 86. He is buried in All Saints Cemetery in Des Plaines, Illinois. There have only been three other Swedish players to make the Majors, and none of them had as cool a nickname as The Swedish Wonder.