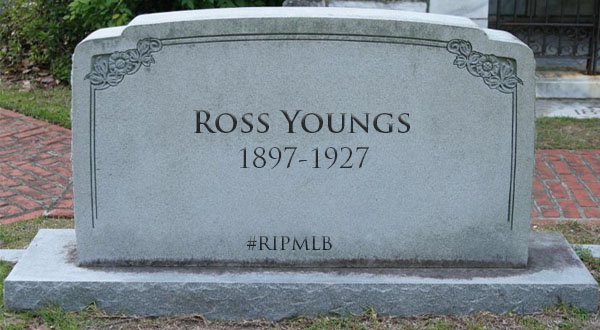 Look at any list of “unworthy Hall of Famers” and you’ll frequently find New York Giants right fielder Ross Youngs on it.

To some extent, it’s understandable.

It’s not Youngs’ fault that his career was as short as it was. He played his last game about four months after his 29th birthday, the victim of a kidney disease that would eventually kill him a couple of weeks after the 1927 World Series finished.

Youngs (he was typically called “Young” during his playing days) was a sensation for the Giants almost from the onset, earning a position as one of manager John McGraw’s favorite players. A week-long audition in 1917 saw him hit .346, putting him in the mix for the starting lineup in 1918.

For the next decade, Youngs was a staple in the Giants batting order, with good reason. He only hit under .300 once in his career and had a high of .356 in 1924. Youngs finished fifth in the Most Valuable Player race that season, hitting a career-high ten home runs with 33 doubles and 12 triples.

The Giants won two World Series championships with Youngs in 1921 and 1922. Not only was he an offensive sparkplug in the regular season those years (.327 and .331 batting average, respectively), but he batted over .300 in those World Series contests against the crosstown Yankees. In his 26 postseason games, Youngs slashed .286/.404/.363.

Youngs’ worst season came in 1925. He hit a career-low .264 and probably led to concerns that he was losing a step. He struggled the first month of the 1926 season with a .232 average at the end of April. He would pick up steam as the season wore on, topping .330 by early July. The average started to slip after that. He hit his last home run on July 31 against St. Louis, and would finish his career with an 0-3 appearance against the Cubs on August 10.

Nobody knew it was his last game at the time, though.

Bright’s Disease is a kidney ailment that is called nephritis today. Someone suffering from it now could undergo dialysis or even have a kidney transplant if kidney failure set in. It was a much more lethal disease a century ago, having killed poet Emily Dickinson and former president Chester Alan Arthur. In 1927, doctors began scrambling to keep it from killing Youngs. He had left the Giants and went back to his home of San Antonio to receive treatment.

The year was touch and go for him. By March 8, his condition was improved. By March 26, a series of blood transfusions left him “resting well”. As late as April 15, Youngs was expressing hope that he could make it back to the Giants before the end of the season.

“I hope for Youngs’ sake and for the sake of baseball that his expectations will be fulfilled,” said McGraw in an AP report.

Youngs’ weight had dropped below 100 pounds during treatment but he’d gain 20 pounds by August. The reality had set in by that time that he would never play baseball again, reported a Waco, Texas newspaper, but his condition improved enough that he was allowed to leave his San Antonio hospital and return home. Ross Youngs suffered a relapse on October 19, and he died on October 22, 1927. He was 30 years old and left behind a widow and a 2-year-old daughter named Caroline. He was buried at Mission Burial Park South in San Antonio. Youngs was inducted into the Baseball Hall of Fame by the Veteran’s Committee in 1972.