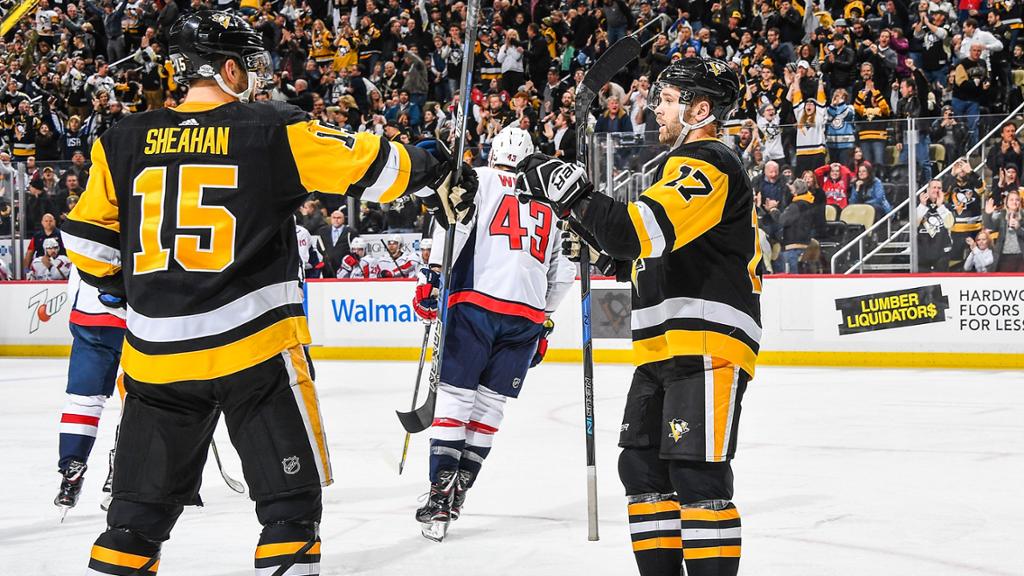 Bryan Rust has been heating up on the ice lately. Riley Sheahan has only five goals on the entire season so far. But the former Notre Dame teammates are teaming up off the ice for something that is far more important than scoring.

Rust, a two-time Stanley Cup Champion with the Penguins, has dealt with a stutter his whole life. It’s something he’s discussed in the past in an article with the Pittsburgh Post Gazette and is hereditary (his brother who played AHL hockey in Wilkes-Barre/Scranton has the same thing). But it’s not something that gets in the way of his success and that, perhaps, is the inspiration for the new program called Seats for Strength.

The Seats for Strength program, which is facilitated by the Pittsburgh Penguins Foundation, is a cooperative effort between Rust and Sheahan. The pair teamed up to buy four season tickets to support children and families through the Allegheny Family Network (AFN). The Allegheny Family Network’s mission is to “support and partner with families rearing children who have emotional and mental health needs in order to improve their quality of life.” Each home game, the two forwards have four tickets that are distributed to beneficiaries of AFN so that the children and their families can experience NHL hockey in person at PPG Paints Arena. In addition to seats, thanks to the ‘Play it Forward’ program each ticket has 25 dollars in loaded value for food and beverages.

An amazing night of @rsheahan15 and @rustyyy_92 working hard on and off the ice! Our little friends truly enjoyed their gameday and meeting their hockey heroes through the Seats for Strength program #KidsAreTheFuture pic.twitter.com/bT61mfWan7

But Rust and Sheahan are hardly alone. Goaltender Matt Murray pledged a $30 donation for every save he made during the 2018-2019 season. This donation will be split with half going to Pittsburgh’s Ward Home and half going to one of two charities in his native Thunder Bay (Children’s Aid Services and Dilico). The donation was inspired by his late father who worked closely with the charities in Thunder Bay and his desire to do what he can to help people, especially children, and young adults. So far, Murray has raised more than $18,000 on the season for these groups.

And giving back? It’s the norm. Tristan Jarry has begun working with The Boys and Girls Clubs in the Wilkes-Barre/Scranton area to get kids out to the games there as well. Kris Letang has worked with the American Heart Association, even co-chairing it’s annual Heart Walk in 2014, after finding a congenital hole in his heart that caused the defender to suffer a stroke.

Evgeni Malkin and Alexander Ovechkin have teamed up previously to help raise money both in the U.S. and Russia to help support the families impacted by the Lokomotiv Yaroslavl plane crash that wiped out an entire KHL hockey team. Not to mention Evgeni Malkin’s recent donation after a gas explosion had catastrophic consequences in his hometown of Magnitogorsk, Russia. He and the Penguins foundation came together to donate $90,000 USD (good for more than 6,000,000 Rubles) to those impacted.

And the captain? He’s always up to something. His Sidney Crosby’s Little Penguins program has helped hockey grow exponentially in the Pittsburgh community since he joined the team.

Growing into our hockey gear!

Connor is all ready for Crosby’s Little Penguins Learn to Play Hockey program! 🏒🐧

He and Malkin also have charity suites available every game. But that’s just the tip of an iceberg. Crosby has a long history of taking time out for others and frequently asking no one to mention it.

Charity and professional sports are hardly unrelated. Teams around the globe give back regularly and in the NHL great programs like P.K. Subban’s Blueline Buddies (bringing together law enforcement officers and underprivileged youth from the Nashville area) are becoming more and more common. But that doesn’t make it any less impactful. Athletes sign contracts to play games and try to win. When they take time out of their lives to meet with and do their part to help members of the community they’re a part of? It’s all their choice. And it’s a choice that doesn’t go unnoticed by the city of Pittsburgh. The Pittsburgh Pirates loss of Andrew McCutchen was made all the more painful by all the work he had done with Make-A-Wish in the area.

.@TheCUTCH22 was in Shaler this morning for his baseball camp for area youth. pic.twitter.com/p2bE93uwm7

Roberto Clemente’s untimely death was a direct result of him heading to take supplies to aid those impacted by an earthquake in Nicaragua and his impact is still a constant in the city to this day.

It’s a fraternity that’s ever-growing, the one that includes professional athletes giving back to the Pittsburgh community, but it helps to make a real difference in many peoples’ lives.