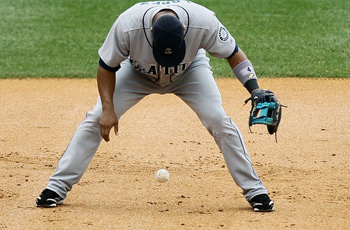 For a professional baseball franchise that has been on the down-trend the past three years, the effort shown by the San Francisco Giants at the 2017 non-waiver trade deadline was uniquely inept.

And by that I mean, sure, we’ve come to expect a fairly static level of ineptness from the Giants front office and General Manager Bobby Evans since 2015.

But by essentially standing pat at the July 31st trade deadline, they discovered previously unexplored dimensions of hapless front office ineptness. (By the way, that’s trademarked.)

Now here’s where Giant fans will jump up excitedly and point to the July 25th trade of IF Eduardo Nunez to the Boston Red Sox for minor league pitchers Shawn Anderson and Gregory Santos.

The only reason that deal was made is that Boston needed a utility infielder to pair with talented rookie 3B Rafael Devers, rated the 4th best minor league prospect in the Majors.

Maybe the Giants can pair Gregory Santos, who is 17 years old, with their first pick in the 2017 first year player draft, outfielder Heliot Ramos, also 17. You might well ask, “OK Mr. Baseball Smarty-tush Dude, what did you expect the Giants front office to do at the trade deadline?” First of all, I think the name-calling is out of line, but I’ll be pre-2017 presidential and let that slide.

In a way that’s actually a good question.

There’s no doubt the Giants had little of value to offer other teams, either from the 25-man roster or their bottom rung farm system. So they were not in a very advantageous position. But we saw zero drive and creativity from the front office to get any kind of deals done that could help advantage the Giants in 2018 and beyond.

But there were some pretty funny SF Giant headlines at MLB Trade-Rumors.com the past several weeks.

Span, who will be 34 next year can barely throw the ball from center field to second base. He is a lead-off hitter with a .328 OBP. His Rtot (the number of runs a player is worth based on the number of plays made) is -11.

Denard Span has one more year to go on his ridiculous $31 million three-year contract. With a $4 million buyout clause in 2019, the Giants will owe Span at least another $13 million over the next two years.

Now why didn’t some MLB team jump at that?

We should probably forgive the Giants front office for bungling a chance to use the trade deadline as a starting point to begin rebuilding this team and its mediocre minor league system.

Because their attention has been almost exclusively focused on re-signing former Giants players; you know, to keep the fanbase happy.

Pablo Sandoval will soon appear at a third base near you, so unpack those panda tee-shirts and funny hats.

And there are also rumors the Giants are anxious to bring back former infielder Matt Duffy and his career .719 OPS from the Tampa Bay Rays.

Could Sergio Romo, Ryan Vogelsong, and Gregor Blanco be far behind?

Essentially what San Francisco Giants’ ownership and front office management are doing is creating a virtual player petting zoo for their player-branded fans.

Forget about all that winning stuff and come to the ballpark. That’s where you can pretend that every game is a sell-out and you can visit the ballplayers you’ve come to love over past six years.

Then shout out their funny nicknames, and be sure to buy lots of replica jerseys, curiously-priced beer, and greasy garlic fries.