SEASON PREDICTIONS DAY 6: WHICH CELTICS WILL MAKE THE ALL-STAR GAME? 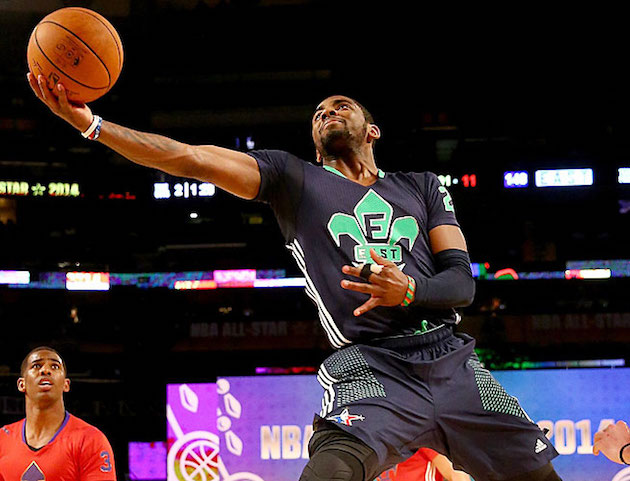 In anticipation of opening night in Cleveland, the Red’s Army staff will make their predictions for how the 17-18 season will transpire. Yesterday we looked at players who might disappoint and fall short of expectations. Today, we’ll look at guys worthy of all-star nods. The last time the Celtics had more than one all-star game representative was in 2013 when Rajon Rondo and Kevin Garnett put on an East jersey in New Orleans. The Cs last had more than two players in 2011 when they had four in Los Angeles. All-star weekend returns to Staples Center again and our staff sees as many as three Celtics playing during all-star weekend. To the predictions we go:

Kyrie is getting voted in for sure. Hayward will most definitely get one of the forward spots and will probably be voted in as well. Because the East is so thin and because the Celtics will be good, I’m going bet that Horford makes it too, though I’m not convinced of that. I really do think the really bad teams at the bottom provide so little talent-wise that it will be hard for any of those teams to send a player to the All Star Game.

Four of last year’s East All-Stars now reside in the West, so there’s plenty of room for Irving and Hayward (who were both in the last ASG). If the Cs are at the top of the conference when the coaches choose the reserves, Horford should also be selected, but he’s not guaranteed like Kyrie and Gordon.

I was debating whether or not to include Al as a voted-in All-Star (he’d be my first guy in for an injured selection if not) and then the decision was made easier by remembering that I’d have a decent shot to make the All-Star team in the East, and also because I think Al’s strengths will really show in his second year under Brad Stevens due to the make-up of this roster. Kyrie could end up starting and Hayward should get the nod as well.

Gordon Hayward will be outshined early in the season and will therefore be left out of a potential ‘Big 3’ trip to the All-Star game. Kyrie is going to have a career year, and I believe as Horford slips down to the 3rd-Star slot (as opposed to playing 2nd-Star to IT last year) people will begin to recognize his greatness on a more consistent basis.

Kyrie and Gordon are practically shoo-ins; they could even both be starters. Horford is a much slimmer possibility, but with the new dearth of stars in the East, him being a reserve wouldn’t surprise me.