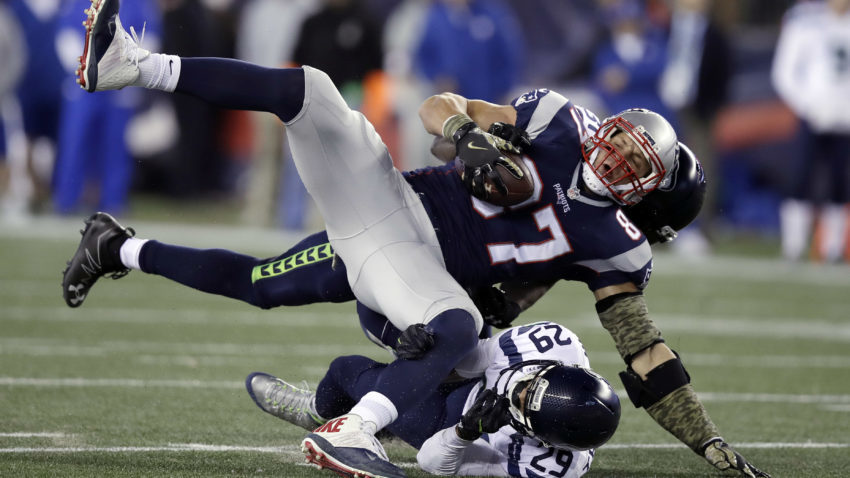 Sunday’s barn burner between the Seattle Seahawks and New England Patriots ended in a familiar fashion; a game winning drive cut short on what fans perceived as a hot button call. Patriots TE Rob Gronkowski initiated contact with Seahawks S Kam Chancellor, and the rest of the play has been watched and studied as much as the zapruder film. While the officials got the call right on this one (Gronk bulldozed Chancellor) it sure seemed like something we see quite a bit of with the Seahawks. Seattle is changing the game when it comes to penalties and officiating, and sooner or later other teams or the NFL is going to catch on.

Seattle plays to the mindset that an official can’t or won’t call a penalty on every play, regardless if there is one. With ratings down (penalties and length of game being a source of frustration for fans) neither the officials nor the league want to see a call on every snap. There’s a few instances that come to mind; the week 6 Sherman-Jones incident, Sherman brickwalling  Powell in week 9, Bobby Wagner hurdling the Cardinals offensive line to block another kick, and Chancellor’s multiple (penalized) attempts at blocking Gano boots. While each one of these is worth looking into on its own, they encompass a larger issue; the Seahawks know they can’t and won’t be penalized on every play. If you’re defending a 1st and goal on four end zone attempts and you interfere all four times, there’s just no way they call it four times in a row. If you’re lining up against a game winning field goal and go over the top of the line every snap, even if the first two are penalized, they can’t call it all night. “They look at it and say, ‘We may get called for one but not 10,’” said former official Mike Pereira.

While the Seahawks push the limits of the officials, don’t get it confused with cheating. Playing to or against the refs is a game inside the game. It’s no different than figuring out where an ump is calling strikes and using that to your advantage. Quarterbacks throw into downfield double coverage all the time knowing a pass interference call is as good as a catch. Aaron Rodgers is a marksman when it comes to snapping the ball while a 12th player has a single cleat still in bounds. It’s up to the refs to make a call and it’s up to the Seahawks to force them to do it. But the NFL is a copycat league, and if you think teams don’t notice what the Seahawks are doing, you’re mistaken. It’s only a matter of time before their tactics are mimicked across the league and NFL officials will have another off-season of meetings and rule changes to address the issue.