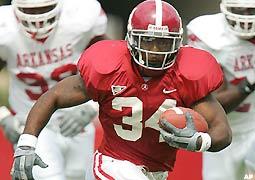 Dev thinks that Florida is going to pull this one out but I have a feeling that Alabama’s defense is going to give Chris Leak a day to remember.

Foxsports outlook on the game

Keys to the Big Games — Florida at Alabama:

Ryans’ Hope — The University of Alabama has been blessed with some of the best linebacker talent college football has ever seen. No matter how far back you go in the history of Alabama football, it’s a pretty safe bet that you’ll find a linebacker worthy of making plays on par with anyone, anywhere. Bama LB DeMeco Ryans is this year’s star linebacker and he’ll play a significant role on Saturday. Florida struggled picking up the different blitz packages that Tennessee threw at them in the first half of that game, and there’s no question that Tide DC Joe Kines will fashion some of his game plan around using Ryans in the same capacity. Ryans was flat out phenomenal against Arkansas, piling up 15 tackles, two for a loss and a sack, and he should have the chance to add to those stats this weekend. In sure passing situations, the key for Florida is how they protect QB Chris Leak, and keep Ryans out of the backfield. If Florida OC Dan Mullen and Urban Meyer wish to use one of their running backs to man up on Ryans, Leak might be on his backside a few too many times. The Tide LB may only blitz if the Florida offensive line slows down DE Wallace Gilberry and the four man rush, which isn’t a 100% guarantee, as it is. But, the speed that Ryans shows off the edge, in combination with Gilberry and company, should create problems for the Florida offense.
TNT — Florida may have the flashier of the two offenses, but the most explosive player on the field will be wearing crimson – #4 Tyrone Prothro. The mighty mite is the one player that Florida may not have an answer for this Saturday. He doesn’t get a ton of publicity, but the teams that have tried to corral Prothro have run into issues. Whether it’s in the passing game, the kicking game or taking shotgun snaps from center, Prothro will make a play that could turn the tide of the game, no pun intended. And, when he makes a play, he can give the entire offense a boost. In the Southern Miss game, down by 11, he made the catch of the millennium, snagging a throw from Brodie Croyle on the back of a Southern Miss DB. After that catch, the Tide offense caught fire, and put up 20 straight points on the board. He puts a charge into the offense every time that he touches the ball, and Florida hasn’t seen a guy this year who can ‘open it up’ in as many different ways as Prothro can. Keep an eye on where Prothro lines up throughout the game, and how many ‘various’ ways Mike Shula can find to get him the ball. He’s a keg of dynamite, waiting to explode, and Saturday will be his show.

Webb of Deceit — With having to live in the shadow of the offense, you’ll have to excuse the Florida defense if they have a life size chip on their shoulder. But, this might be the most talented defense that Florida has had in some time, and they may not have ever had a play making corner like Dee Webb. The former Ed White star will be on the spot much of the day, as he’ll be matched up with Prothro and DJ Hall, a lesser known, but equally talented receiving threat. Webb’s ‘length’ is tough for opposing receivers and also for quarterbacks attempting to throw to his side. Not only does Webb cover like a blanket, he’s got solid ball skills and breaks on the ball as well as anyone in the SEC. Hall and Prothro are completely different receivers, and Webb’s approach to covering them will be a major factor to whether Florida shuts down the Alabama passing game. Webb and Vernell Brown have been strong this year, but this pair of receivers is just as good as what they saw against Tennessee. If Webb is aggressive in coverage early, knocking a ball down or intercepting a pass, Croyle may want to go away from him, limiting his looks to one side of the field. That’s a huge advantage for the Gators to say the least.

Conclusion — The Rivalry is back. Back in the early to mid 1990s when the Gators and the Tide battled every year for the SEC championship, now that was fun. And, it’s back. Undefeated Gators. Undefeated Tide. This ought to be to be fun. For all that Alabama has going for it, the success of this game, and this season, rests on the capable shoulders of QB Brodie Croyle. With the loss of Ray McDonald at DE, the Gator pass rush isn’t as dominant as it could be. If the Tide OL can give Croyle the time, he has the receivers that will get open and make plays. At home, the Tide makes the Bear proud.