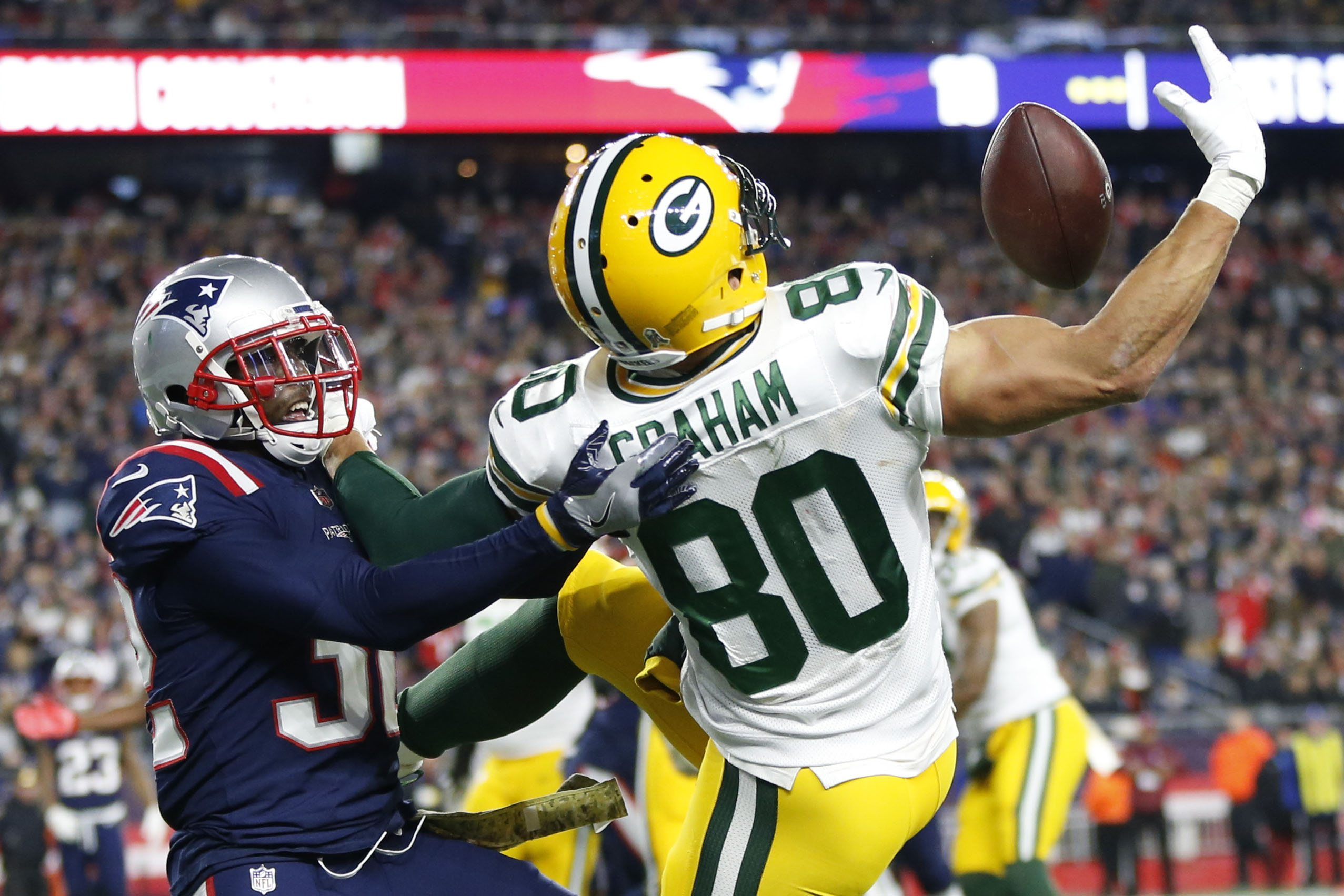 The Green Bay Packers fell to the Patriots 31-17 in New England to drop to 3-4-1 on the season. Tom Brady outdueled Aaron Rodgers and the Packers had no answers to a pair of fourth quarter touchdowns by New England that broke a 17-17 tie.

Green Bay is in a tough spot as they start the second half of the season. Mike McCarthy’s club will need to win at least six of their final eight games to have a chance to qualify for the playoffs.

Here are seven key takeaways from the Packers Week 9 loss to the Patriots:

1. The Packers are still making too many careless mistakes

The Packers are still making foolish mental errors and this team isn’t good enough to overcome this many of them. On the opening kickoff, the Packers were offside. In the fourth quarter, trailing by 14 points, the offense showed no urgency getting plays off as the clock ran down. The Pack took a costly roughing the punter penalty and lost safety Jermaine Whitehead when he was ejected for an open-handed slap at an opponent wearing a helmet.

Unfortunately, this Packers team is not good enough to make up for all these mistakes and still win football games against elite opponents. Amazingly, they came close two weeks in a row, but coming close doesn’t earn you a playoff berth come January.

The coaching staff must work to eliminate these foolish penalties and mental errors and do it immediately. Time is running out to correct these mistakes and right the ship.

The Packers had trouble covering running back James White as a receiver out of the backfield and stopping converted wide receiver Cordarelle Patterson as a runner.

White caught six passes for 72 yards including a damaging 37-yard gain on a screen pass that gave the Patriots a key first down. Meanwhile, Patterson ran the ball 11 times for 61 yrds and a touchdown.

The Packers didn’t have an answer for either of these speedy backs. The fact that so many players were injured on the defensive side of the ball didn’t help, but at the end of the day, Green Bay’s defense was unable to make the proper adjustments to slow down these players. Tom Brady took advantage, especially in the fourth quarter with the game on the line.

Marquez Valdes-Scantling has been the most impressive of the Packers three rookie receivers. MVS had 101 yards on three receptions including a key 51-yard catch and run that impressed the coaching staff and had to increase Rodgers confidence in the rookie.

Valdes-Scantling is averaging 21.1 yards-per-catch and has surpassed 100 yards in a game twice already despite not being Rodgers primary target.

Yes, there are still rookie mistakes, but Valdes-Scantling is learning and improving and starting to realize his immense talent.

With Geronimo Allison likely out for the rest of the season, MVS should expect an even bigger role in the offense going forward.

Tom Brady had too much time to throw the football Sunday night. You can’t give a future Hall of Famer like Brady that kind of time or he will surgically tear apart your defense.

The Pack was officially credited with two sacks, but pressures were few and far between.

Has anybody seen Nick Perry lately? He has 1.5 sacks through eight games which puts him on pace for three sacks over a full season. Clay Matthews played well against the Rams but wasn’t a factor against New England and hasn’t provided much pressure over the course of the campaign. Reggie Gilbert had a great August but hasn’t produced much of anything in the regular season.

Mike Pettine has created pressure at times this season with exotic blitz packages, but there was not enough pressure on Brady Sunday night. Overall, this team lacks an edge rusher who can get to the quarterback and it’s costing them dearly against better quarterbacks.

5. The Defense is Getting Depleted

Injuries are mounting on defense for the Packers. Cornerback Kevin King left the game with a hamstring injury and did not return. Starting safety Kentrell Brice left with a knee injury and linebacker Blake Martinez turned and ankle in the second half but managed to return late in the game.

First-round draft choice Jaire Alexander was shaken up in the third quarter as well although he jogged off the field under his own power.

Add Whitehead’s ejection and the trade of Ha Ha Clinton-Dix and the Packers defense had limited options by the fourth quarter.

Antonio Morrison did a good job filling in for Martinez while he was out of the lineup, but Martinez is by far the Packers best linebacker and they can ill-afford to lose him for very long.

Josh Jackson and Bashaud Breeland struggled when they were pressed into duty in the secondary.

The health of the defense will be an important factor as the Packers look to turn their season around.

6. Aaron Rodgers Is Not on Top of His Game

Aaron Rodgers isn’t playing poorly, but he’s not quite the Aaron Rodgers we have come to expect. Whether it’s the knee injury he suffered in Week 1 or the new wrinkles put into the offense or the supporting cast, something is missing.

Rodgers is throwing the ball away more often than he ever did, his completion percentage and his yards-per-attempt are both down and he just doesn’t seem as comfortable or confident this season as he did in the past.

Part of the problem has been that the Packers have thrown too often and not run the ball enough. In fact, Rodgers has thrown at least 40 passes in six of the team’s first eight games. The team’s inconsistency also meant the Green and Gold had to come from behind which doesn’t make Rodgers’ job any easier.

The Packers need their best player to play his best football in the second half. If he doesn’t, this team won’t have much chance of making a playoff run.

Errors on special teams have cost the Packers too often this season and Week 9 against New England was no exception. Patterson broke a pair of good kick returns for the Patriots and the Packers added to the problem with an offsides penalty on the opening kickoff that added five yards to an already long return.

Later, a roughing the punter penalty cost the team field position and erased a potentially momentum changing three-and-out. Another penalty on a punt cost the Pack five more yards and valuable field position.

The return game did not look good without Ty Montgomery. Breeland was nothing special in two kick returns.

Overall, the special teams need to be improved and quickly.