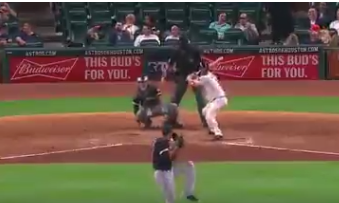 Accusations continue to surround the Houston Astros, with former players such as Mike Fiers even admitting the team got away with cheating (stealing signs) in 2017, when they won the World Series.

Other teams in the playoffs in the past — the Yankees, Red Sox among them — have indicated that they’ve noticed the team stealing signs after reviewing video of the games.

And now we may know exactly how they were doing it.

Video of some recent games shows Astros players or staffers picking up on opposing catchers’ signs and banging on a trash can before key pitches. If they didn’t bang on it, then they were indicating to the hitter at the plate that a fastball was coming. If they did, then it would be an offspeed pitch. Check out some of these videos which back up that theory.

haha listen to this one. Springer homers on an 0-2 pitch pic.twitter.com/FZ6eT6Ikwf

Another game vs the WS.

Bregman down 0-2. gets two offspeed pitches that come with the bang. spits on the first. homers on the second. pic.twitter.com/pM6i0UKgGH

It will be interesting to see what comes of this, as MLB has opened an investigation into these claims. However, it sure looks like the Astros have been caught cheating — the proof is in the pudding.