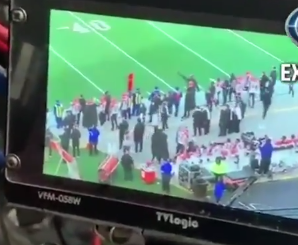 The Patriots are doing all they can to try to sweep their sideline videotaping investigation under the rug, but it’s not going away anytime soon, especially after a recent bit of footage leaked out.

It does appear that there’s video showing a Patriots employee videotaping the Bengals sideline from the Browns’ press box during last Sunday’s game, as FOX just released an exclusive video showing exactly that.

It’s interesting because the Patriots were busted for doing a similar thing — videotaping the Jets walkthroughs — a few years back, and the league punished them for that investigation, labeled “Spygate.” This particular incident is being titled “Spygate 2,” and it will be interesting to see what the league finds.